Blu-ray
The Last House on the Left

Article
Saw the Fifth Cutting It's Way Through March

Article
Find Your Way Back To Sesame Street Old School!

Journey to the Center of the Earth out in March 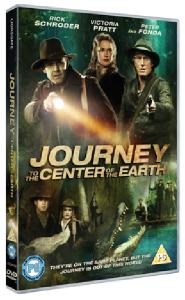 THEY'RE ON THE SAME PLANET, BUT THE JOURNEY IS OUT OF THIS WORLD

JOURNEY TO THE CENTER OF THE EARTH
RELEASE DATE: 23rd MARCH 2009

Take a step into the unknown with an intrepid team of explorers as they venture where no one has dared go before. But miles below the Earth's surface is an endless chasm of living, breathing dangers that are out of this world.

Set in the late 1870's, wealthy Martha Dennison (Victoria Pratt) hires anthropologist Jonathan Brock (Rick Schroder) to track down her husband, Edward (Peter Fonda), who has disappeared while searching for an elusive passage to the centre of the earth four years earlier.

As the expedition retraces Edward's last known steps, they uncover an extraordinary world and a primitive civilization, the like of which has not been seen since the dawn of time. They also make a shocking discovery about Edward and find themselves in a desperate bid to escape a myriad of dangers as they fight for their lives to see the light of day.

Over half a million viewers tuned into Sky One and Sci-Fi Channel to follow the action-packed drama when Journey To The Center of the Earth was broadcast as a mini-series. Now it's yours to own on DVD, released by Lions Gate Home Entertainment on 23rd March 2009.

Lions Gate Home Entertainment, a Lionsgate company (NYSE and TSX:LGF). Lionsgate is the premier independent producer and distributor of motion pictures, television programming, home entertainment, family entertainment and video-on-demand content. Its prestigious and prolific library is a valuable source of stable, recurring revenue and is a foundation for the growth of the Company's core businesses. The Lionsgate brand name is synonymous with original, daring, quality entertainment in markets around the globe. Lionsgate can be found on the World Wide Web at http://www.lionsgate.com