Article
Thirty Years of Pain out in June

Ghostbusters to burst onto Blu-Ray in June 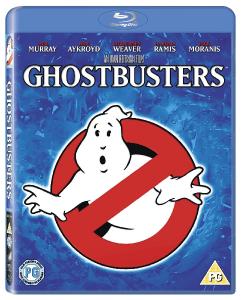 Available for the First Time in High-Definition in Celebration of the 25th Anniversary
Arrives Packaged with 32 Page Scrapbook, Including Exclusive High-Def Features "Slimer Mode" and "Ecto-1 Refurbishment" Featurette


Everyone's favourite paranormal psychologists are back to save the world, this time with unsurpassed picture and audio quality and advanced new bonus features in the Ghostbusters Blu-ray Disc. Releasing on 15 June, 2009, in celebration of the film's 25th anniversary, Ivan Reitman's sci-fi blockbuster comedy stars Bill Murray, Dan Aykroyd, Sigourney Weaver, Harold Ramis, Annie Potts, and Rick Moranis. The high-def set oozes with special features and interactivity, including collectible 32 page scrapbook, Slimer Mode, a picture-in-picture graphical viewing experience, a featurette on the refurbishing of Ecto-1, and more.

"This great franchise is one of the crown jewels in the studio's library," said Lexine Wong, Sony Pictures Home Entertainment's Executive Vice President, Worldwide Marketing. "With Ghostbusters 25th anniversary upon us and the forthcoming release of an eagerly anticipated new video game, this is the perfect opportunity to release this exciting new edition on Blu-ray Disc."

Synopsis:
University parapsychologists Dr. Peter Venkman (Murray), Dr. Raymond Stanz (Aykroyd) and Dr. Egon Spengler (Ramis) lose a research grant when their experiment methodology is proven to be bogus. The team decides to go into business for themselves and open 'Ghostbusters,' a ghost removal service. After struggling to get on their feet, they are summoned to investigate the strange happenings in Dana Barrett's (Weaver) Central Park West apartment. What they discover is that all Manhattan is being besieged by ghosts and other worldly demons through a portal in her building.

Ghostbusters has a run time of approximately 105 minutes and is rated PG for adult language and mild violence.