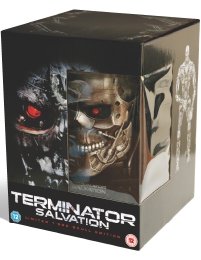 Blu-ray
Terminator 3: Rise of the Machines

Article
Terminator Salvation out in November 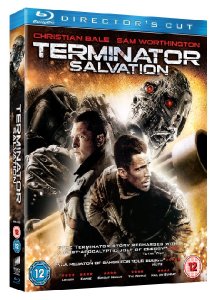 Blu-ray Edition Arrives loaded with exclusives including the
Extended Director's Cut and 'Maximum Movie Mode,'
Allowing Viewers to Watch the Film with McG!

Stars Christian Bale (Batman Begins, The Dark Knight) and Sam Worthington (Avatar) ignite the battle between man and machine in the futuristic action epic TERMINATOR SALVATION, blasting its way onto Blu-ray and DVD on 23/11/09 from Sony Pictures Home Entertainment. The TERMINATOR SALVATION Blu-ray and DVD will arrive packed with spectacular bonus features, including "Re-Forging the Future," an exclusive, behind-the-scenes look at the film's production, "The Moto-Terminator," a featurette revealing how the film's visual effects crew and motorcycle manufacturer Ducati partnered to create the slick and deadly Moto-Terminators, plus eleven mini featurette focus points spotlighting how the ground-breaking special effects were created.

The Blu-ray edition of TERMINATOR SALVATION will exclusively include McG's Director's Cut of the film with additional footage not shown in cinemas and Maximum Movie Mode, which allows viewers to watch the film with director  McG and includes a Picture In Picture (PiP) commentary with cast and crew interviews; 11 mini featurettes; storyboards; still galleries; and more. BD-Live features on the disc include 10 downloadable "Terminator TechCom" videos, live-updated film information via movieIQ, and cinechat, a feature allowing movie fans to chat live with friends around the world while viewing this, or any other cinechat-enabled Sony BD title.

Priced to own at an RRP of £24.99 (Blu-ray) and £19.99 (DVD), TERMINATOR SALVATION is the beginning of an exciting new chapter in the mega hit Terminator series movie lovers around the world won't want to miss. The film is also available to buy as part of a TERMINATOR 1 - 4 DVD box set, priced at £34.99 RRP, and as a Collector's Edition Blu-ray with stunning life-size Skull packaging for £74.99 RRP, the ultimate purchase for true fans of the franchise.

TERMINATOR SALVATION was produced by Moritz Borman (Terminator 3: Rise of the Machines), Derek Anderson (After the Wedding), Victor Kubicek (After the Wedding) and Jeffrey Silver (300). It was co-written by the writing team of John D. Brancato and Michael Ferris (Terminator 3: Rise of the Machines, The Game). The film also co-stars Jane Alexander (The Ring), Moon Bloodgood (What Just Happened?) and Michael Ironside (Total Recall). The film was released internationally by Sony Pictures Releasing and has a run time of approximately 114 minutes.  It has been rated 12 (tbc) for DVD and Blu-ray. 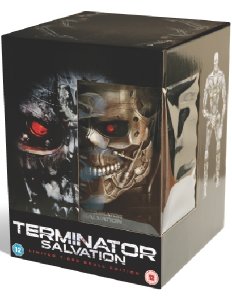 Synopsis
John Connor (Bale) was fated to lead the human resistance against Skynet and its army of Terminators. But the future Connor was raised to believe in is altered in part by the appearance of Marcus Wright (Worthington), a stranger whose last memory is of being on death row. Connor must decide whether Marcus has been sent from the future, or rescued from the past. As Skynet prepares its final onslaught, Connor and Marcus both embark on an odyssey that takes them into the heart of Skynet's operations, where they uncover the terrible secret behind the possible annihilation of mankind.

The Blu-ray Disc™ version of TERMINATOR SALVATION is BD-Live™ enabled, allowing users to get connected and go beyond the disc via an Internet-connected Blu-ray player. Download content, give feedback through an exclusive survey, and register for rewards.