Article
US comedy American Hot Babes out today on DVD

Article
Action thriller Armored hits DVD and Blu-ray in May

Malice in Wonderland out on DVD in February 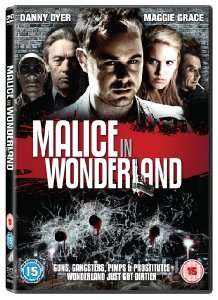 Synopsis:
When beautiful American law student Alice (Maggie Grace) is knocked down by a black cab on a deserted London street it's just the start of her problems. Miles from home and relentlessly pursued by a shadowy group intent on taking her captive, she begins a dark and dangerous journey through a violent underworld full of gangsters, geezers, pimps and prostitutes. With only enigmatic cab driver Whitey (Danny Dyer) to guide her, she soon finds that the only way out is to fight for her freedom. As both fists and bullets begin to fly, Whitey and Alice soon find that in a world where nothing is as it seems, their only hope is to turn the tables on those who want to hunt them down.

Paul Kaye, Bronagh Gallagher (The Commitments), and Matt King also star in this explosively twisted thriller where danger lurks around every corner…