Blu-ray
Highlander: The Search For Vengeance

Article
First season of Justified arrives on DVD in November 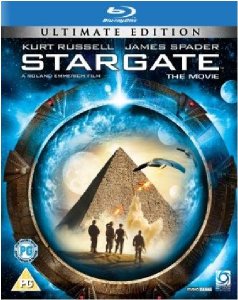 Grossing nearly $200 million worldwide on its first release in 1994, Stargate has become a cult phenomenon, spawning a military science fiction franchise that has expanded from film and television to books, video games and comic books.  Now, with its 29th March 2010 Blu-ray release, this extraordinary film can be viewed in all its stunning glory and with a mouth-watering line-up of extras.

Stargate is the film that launched the career of Roland Emmerich, the director of such epic widescreen sci-fi movies as 2012, The Day After Tomorrow and Independence Day.  The film's sense of scale overwhelms to stunning effect, ably abetted by Karl Walter Lindenlaub's beautiful soft focus photography and the co-writing skills of Dean Devlin (along with those of Emmerich).  The special effects are simply stunning - the liquid pool of energy as people enter the stargate; the giant pyramid ship descending during a storm; the bantha-like animals; the anubis-headed guards and with their morphing suits of armour; the fighter ships and the colossal nuclear explosions in the void.

With a star line-up that features Kurt Russell as Colonel Jonathan "Jack" O'Neil, James Spader as Dr Daniel Jackson, Jaye Davidson as Ra, Viceca Lindfors as Catherine and Alexis Cruz as Skaara, science fiction aficionados can look forward to a glorious world of Blu-ray wonder with this latest Stargate release.

When a mysterious artefact is unearthed at Giza, tough-minded military man Colonel Jack O'Neill (Kurt Russell) clashes with archaeologist Daniel Jackson (James Spader) over the origin and potential of the object.  When Jackson identifies the object as a portal to another world, O'Neill leads him and a team through the "Stargate".  They are transported millions of light years from Earth where they are stranded on a strange and alien planet.  When the enigmatic ruler of this extraordinary world, Ra (Jaye Davidson), discovers that the doorway to Earth can be reopened, he devises a deadly plot. Racing against time, O'Neill and Jackson must overcome Ra if they are to save Earth and find a way back home.