DVD
Due South: The Complete Series

Blu-ray
Eden Of The East (2 Discs)

Article
James Nesbitt stars in Blessed out on DVD in June

Article
The End of Love out in June

Extraordinary Measures out in June on DVD 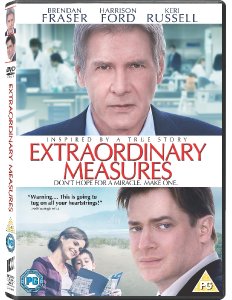 Available on DVD from June 21

Extraordinary Measures, the remarkable film inspired by a true story, arrives on DVD on June 21, courtesy of Sony Pictures Home Entertainment. Brendan Fraser (The Mummy films, Journey to the Centre of the Earth), Academy Award®-nominee Harrison Ford (1985, Best Actor in a Leading Role for Witness) and Golden Globe® winner Keri Russell (1998, Best Performance by an Actress in a TV-Series - Drama for "Felicity") star in the inspiring, touching drama about a man who defied conventional wisdom and great odds to pursue a cure for his children's life-threatening disease.

It's a race against time as John Crowley (Fraser), an idealistic father, and Dr. Robert Stonehill (Ford), a reclusive medical researcher, battle the medical establishment to find a cure for John's children before it's too late. Tom Vaughan (What Happens in Vegas, Starter For 1w0) directed the screenplay by Academy Award®-nominee Robert Nelson Jacobs (2000, Best Writing, Screenplay Based on Material Previously Produced or Published for Chocolat), based on the book The Cure, by Pulitzer Prize-winning writer Geeta Anand. Extraordinary Measures will be available for £19.99.

Synopsis:
Fate and determination push idealistic father John Crowley (Fraser) into joining forces with reclusive medical researcher Dr. Robert Stonehill (Ford). Together, this unlikely pair face impossible odds as they battle the entire medical establishment and time itself to find a cure before it's too late. Also starring is Keri Russell as Crowley's wife Aileen. Extraordinary Measures is inspired by the true story about the power of love and courage against impossible odds.