DVD
We Are What We Are

Blu-ray
A Bay of Blood

Article
Animals out on DVD in August

Article
No One Lives hit DVD and Blu-ray this week

Horror flick The 7th Dimension arrives on DVD in August 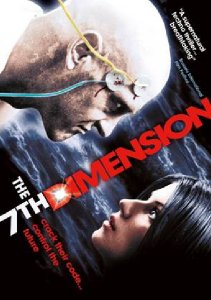 From the production teams behind Die Another Day, Harry Potter and Torchwood
Crack their code ... control the future

Ever wanted to predict the future? Ever believed in a conspiracy? The members of Beacon 77, a dedicated group of computer hackers, do and now they have hacked in they cannot get back out …

Taking on the Vatican's secrets with their computers, these hackers are now faced with the puzzles of the Bible Code, a code that if cracked would give anyone who uncovers it ultimate knowledge and unlimited power. But, once Beacon 77 discovers the world's conspiracies, who is left to trust?

Who will win: the unprepared hackers who have discovered the deadly 7th Dimension or the omnipresent power that is far greater than any computer?

"Managing to be both creepy and tense, it's refreshing to see a homegrown horror that is hugely entertaining" Gorezone

Written and Directed by Brad Watson