Article
Season 6 of The Avengers comes to DVD in December

Article
War drama The Silent Army out on DVD in December 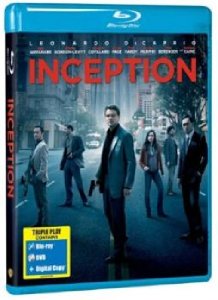 EXPLODES ONTO BLU-RAY TRIPLE PLAY AND DVD ON DECEMBER 6th

"Inception is the stuff that dreams are made on" - The Observer

"As Inception unfolds, layer upon layer, Nolan provides 21st-century thrills in the way that Jules Verne and H. G. Wells did for the Victorians." - The Times

News of the World Empire The Sun Daily Star

From the acclaimed filmmaker of "The Dark Knight" and "Batman Begins" comes the heart-pounding thrill ride "Inception," exploding onto Blu-ray and DVD this December 6th from Warner Home Video (WHV). Featuring an all-star international cast this original mind-bending blockbuster travels the globe exploring the secret and infinite world of dreams. The Blu-ray disc's exciting special features include a unique in-movie experience with Christopher Nolan, Leonardo DiCaprio and the rest of the cast as they delve into the intricacies of the film, a never-before-seen documentary conceived by Nolan on dream research, and much more.

"Inception" will be available on Blu-ray Triple Play, featuring a hi-definition, a standard definition, and a digital copy of the film, for £28.99 and on Two Disc DVD in widescreen format for £22.99 RRP.

On December 6th, "Inception" will also be available ON DEMAND and DIGITAL DOWNLOAD.

Cobb is a skilled thief and coveted player when it comes to extraction: the stealing of valuable secrets from deep within the mind during a subject's dream state. His skill, though, has turned him into an international fugitive and he is now being offered a chance at redemption. One last job. One last job to give him his life back. But only if he can pull off the impossible - inception -- not stealing an idea but planting one. If Cobb and his team succeed, it will be the perfect crime. However, no amount of meticulous planning can prepare the team for the dangerous enemy that seems to predict their every move. An enemy that only Cobb could have seen coming.

Blu-Ray Triple Play:
· EXTRACTION MODE - Infiltrate the dreamscape of "Inception" - with this in-movie experience - to learn how Christopher Nolan, Leonardo DiCaprio and the rest of the cast and crew designed and achieved the movies signature moments.
· DREAMS: CINEMA OF THE SUBCONSCIOUS - Taking some of the most fascinating and cutting-edge dream research to-date on lucid dreaming, top scientists make the case that the dream world is not an altered state of consciousness, but a fully functional parallel reality.
· INCEPTION: THE COBOL JOB - Now in full animation and motion, check out this comic prologue to see how Cobb, Arthur, and Nash came to be enlisted by Cobol Engineering and perform an extraction on Saito.
· 5.1 INCEPTION SOUNDTRACK - Composer Hans Zimmer teams up once again with Director Christopher Nolan to create the soundtrack for "Inception". Enjoy this feature in full 5.1 surround.
· CONCEPTUAL ART GALLERY
· PROMOTIONAL ART ARCHIVE
· INCEPTION TRAILERS
· INCEPTION TV SPOTS
· Via BD-Live - PROJECT SOMNACIN: CONFIDENTIAL FILES - Get access to the highly secure files that reveal the inception of the dream-share technology.