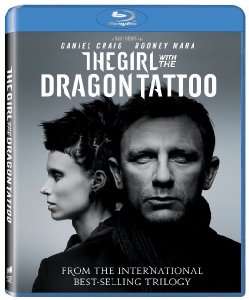 THE GIRL WITH THE DRAGON TATTOO

Disgraced journalist Mikael Blomkvist (Craig) accepts an invitation to surreptitiously investigate a forty year old unsolved murder on behalf of the victim's uncle, Swedish industrialist Henrik Vanger (Plummer). Meanwhile, tattooed hacker Lisbeth Salander (Mara), hired to investigate Blomkvist, discovers the truth behind the conspiracy that led to his fall from grace. Thrown together by fate, the unlikely duo uncovers a secret history of murder and sexual abuse festering beneath the veneer of Sweden's industrial past, all the while drawing close to a quiet evil waiting to engulf them both.

Blu-ray and DVD Include:

Exclusive to the Two-Disc Blu-ray:

Dig deep inside the Vanger Archives with nearly four hours of immersive, behind-the-scenes footage including interviews and more:[/li][/ul]
Find The Girl with the Dragon Tattoo on Facebook at www.facebook.com/DragonTattoo.UK

Pricing and bonus features on Digital editions of The Girl With The Dragon Tattoo may vary by service provider.