Places to Buy
Magnificent 11
Not available

New: £7.99
Those Magnificent Men in Their Flying Machines or How I Flew from London to Paris in 25 hours 11 minutes (DVD), German Import
WHITMAN STEWART

The Tourist
Not available

DVD
The Gang's All Here

Irvine Welsh's The Magnificent Eleven hits DVD this May 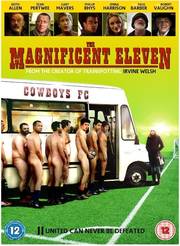 It's been a while since we saw a British comedy drama that hit the heights of The Full Monty, so maybe the latest Irvine Welsh penned contribution may lighten our days.

With a runtime of 95 minutes and a recommended retail price of £13.27, extras will include a commentary track with the director alongside producer John Adams, four behind-the-scenes featurettes and a trailer.

The Cowboys are a local Sunday soccer team who always seem to finish bottom of the league. Now, they’ve finally run out of money and after losing yet another match they do what they always do to drown their sorrows, go to the pub and head off for an Indian.

Barred from every Indian restaurant in town due to their bad behaviour, there’s only the Taj Tandoori left to go for the Cowboys last team meal. When it comes to paying the bill the realization of not having enough money finally hits home but instead of calling the Police the owner offers the Cowboys a sponsorship deal they just can’t refuse.

Financing the team to keep it going the Cowboys in exchange must work as waiters in his restaurant, rename the team the Taj Cowboys and sport a ridiculous new football strip. Unknown to the Cowboys the restaurateur is really using them as security against a local racketeer run by a psychotic gangster known only as American Bob (Robert Vaughn).

Reasoning with American Bob only leads to more misery and destruction but when the chips are down the Cowboys and the Indians form the most unlikely of alliances as they take on American Bob and his mighty bandits head on. Together they'll prove that... eleven united can never be defeated.