Blu-ray
A Million Ways to Die in the West 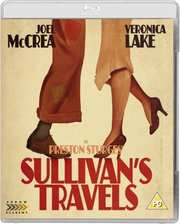 A bit short notice on this one, but notice all the same, Arrow Films have announced a release on their Arrow Academy for 26th May. Out on Blu-ray is Sullivan’s Travels, from writer Preston Sturges and starring Joel McCrea and Veronica Lake.

The recommended retail price for this release will be £24.99.

Director John L. Sullivan is one of Hollywood’s hottest talents, with an uncanny gift for getting audiences rolling in the aisles. But he’s dissatisfied: he wants to abandon comedy for Serious Statements, and buys the rights to celebrated social-realist novel ‘O Brother, Where Art Thou?’

To make his masterpiece as realistic as possible, Sullivan naturally has to understand how the book’s downtrodden characters must have felt, so he takes to the road as a hobo, is taken under the wing of a failed actress, and learns several valuable home truths about the importance of not patronising his audience.