DVD
Naruto The Movie 3: Guardians Of The Crescent Moon Kingdom

It’s one of those oddly timed news drops. There isn’t a Comicon in sight, everyone is off for summer, and everything seems quiet and ticking over in the world of anime, and suddenly an e-mail hits and we get a whole new bunch of licence announcements. This time it’s from the Animatsu Manga amalgam.

Quote:
Manga Entertainment and Animatsu Entertainment are excited to announce that they will be releasing Digimon Adventure Tri Movie 1, Wish Upon the Pleiades, Perfect Insider, and When Supernatural Battles Become Common Place.

Wish Upon the Pleiades will be out on Blu-ray DVD combo from Animatsu on October 17th, Perfect Insider gets the same treatment on November 14th. Manga Entertainment will release When Supernatural Battles Become Common Place on separate DVD and BD on October 31st, while they’ll release the first Digimon Tri movie on DVD and on Collector’s Edition BD on December 19th. 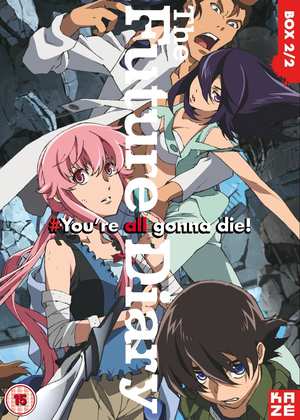 It’s been a week of mediocrity when it comes to reviews, with nothing really exciting me, or coming across as particularly noteworthy. You might think that Mirai Nikki: Future Diary Complete Collection 2 (bit of an oxymoron, that), would certainly excite, even if for all the wrong reasons. Certainly its video nasty aesthetic of extreme violence and occasional nudity and even sex harks back to the Manga Video of old, and its particular take on the death game genre is unique enough to make it worthy of consideration. It even has some interesting characterisations, and a perversely appealing anti-hero character. But it falls flat with its story, and in the end it fails to do its characters justice. Click on the review to read more. 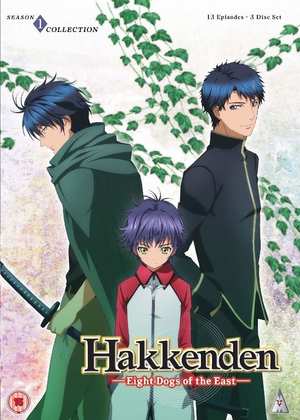 Hakkenden sounds like an underground station. Please change at Hakkenden South for District, Circle and Jubilee lines. Remember to take figurines and character body pillows with you when you leave the train. That might be the most fun I had with Hakkenden: Eight Dogs of the East Season 1, based on the same legend that inspired Fusé: Memoirs of the Huntress. It’s a supernatural fantasy about... well, there are these kids who survived... there’s this church that wants this one kid to... Damn it! I finished watching this series barely four days ago and I’ve already forgotten what it’s about, it’s that bland! I’m going to re-read my review to jog my memory, I suggest you do too. 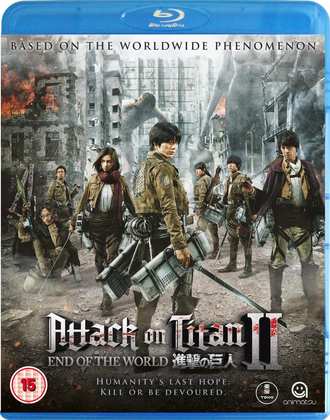 If there’s one thing that you can’t accuse Attack on Titan: The Movie – Part 2: End of the World of being, it’s bland. If you want to take a step away from the animated medium, you might be interested in the second live action adaptation of the epic ‘humans versus man-eating giants’ manga. The first part was released just last month, so we haven’t had long to wait to find out what happens to Eren, now that his secret is out. Alas, while there is a whole lot happening in the second movie, and to its credit it does deliver a conclusion that fits the movie format and goes its own way compared to the manga, this film is let down wholly by the execution. We’re talking bad acting, people. Watch the trailer for Hange for an example! 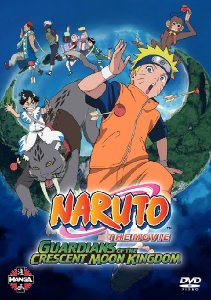 Naruto The Movie 3: Guardians Of The Crescent Moon Kingdom. Remember when Naruto used to be fun? It’s all ponderous Ninja War this, and Sasuke angst that these days, with Shippuden stretching interminably long. It seems the glory days of the first series are long gone now, back when Naruto was sold as the ninja Harry Potter, and Manga were selling tens of thousands of DVDs. It used to blend action, comedy and drama in equal measure, and it could be joyfully silly, and emotionally moving at the same time. Of course it had the problem of filler even then, and that was especially true for the movies, which usually amounted to Naruto’s team having to help a guest character for the duration, and said guest character needing a little orange ninja pep-talk to work out a few personal issues as well. The epitome of this trope came in the third Naruto movie, Naruto The Movie 3: Guardians Of The Crescent Moon Kingdom, which to date is still my favourite of all the Naruto features. A spoilt playboy prince gone to seed, and his young son need a ninja escort all the way back to their island home following a lengthy and profligate shopping trip. The princes are so spoilt that they even buy a circus along the way, only when they get home, they find the king has been usurped, his traitorous aide Shabadaba (yes, really) has taken over the kingdom, and his next move is to wipe out the royal bloodline. The spoilt princes will need to learn the value of people, of loyalty, and of duty if they are to regain their birthright. Fortunately they have Naruto on their side to help them.

It is a standard story, but what make it special are the characters. The royal father and son are interesting, their problems feel genuine, and their characters are complex enough to empathise with. It’s a rich and vivid animation, very well put together, and the usual Naruto ninja action sequences have even greater impact in this movie. And those action sequences are great, we not only get to see Naruto cut loose with his 9-tailed Fox powers before the anime turned him into a bunny rabbit overdosing on Ready Brek, this is one of those rare stories that lets us see Sakura kicking ninja behind, but the best action sequence has to come from Rock Lee, who most certainly isn’t as proficient with nunchukas as Bruce. Manga Entertainment released Naruto The Movie 3: Guardians Of The Crescent Moon Kingdom on DVD here back in 2009, and you should still be able to pick it up on retail. If you’re proficient in French (or Japanese) however, you can get Naruto Le Film: Mission Speciale au Pays de la Lune on Blu-ray, from a French e-tailer. They like their Naruto over there!

Kazé Entertainment released Mirai Nikki: Future Diary Complete Collection 2 on DVD and on Blu-ray on July 11th. MVM release Hakkenden: Eight Dogs of the East on DVD and on Blu-ray today. Animatsu release Attack on Titan: The Movie Part 2: End of the World on DVD, Blu-ray, and I believe there’s a certain retailer exclusive Steelbook version as well, and it comes out today.