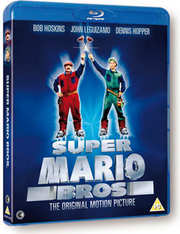 Blu-ray
One For The Money

Blu-ray
That Time I Got Reincarnated as a Slime: Season One Part One
Related Articles

Article
The Hunger Games fires its way to Blu-ray, DVD and VOD in September

When Daisy is kidnapped and taken to a parallel dimension where dinosaurs have evolved into intelligent creatures who else but a couple of Brooklyn plumbers can save her? The Mario Brothers, Mario and Luigi, set off to rescue her and stop the evil King Koopa from merging their worlds and devolving the entire human race into monkeys. What follows is a madcap fantasy adventure based on the the classic Nintendo game franchise.

You either love or hate this movie. There is no even ground. Me? My only problem with this film is its title. If this was called 'Dinosaur Dimension' and had nothing to do with the Super Mario games it is a good fantasy movie. The problem is, it's not. This is supposed to be the live action version of the Super Mario games and because of that, everything I see feels forced.

There is the use of characters: Toad being a protest singer who gets turned into a gigantic Goomba guard, Yoshi being an actual dinosaur, The King being a fungus. Items that appear all feel like easter eggs that only the hardcore fans will see such as the Super Scope, Bullet Bills to power the jump boots, the Bob-ombs, Mushroom shields. It all feels forced and because of that, a lot of it is groan-worthy.

I love this movie. I don't know why. I mean it is dumb, it really is. The acting by everyone, particularly Dennis Hopper as Koopa is so over the top, it is hilarious. Bob Hoskins makes a perfect Mario and John Leguizamo is a perfect Luigi. Both work well with what they have and (again) if this wasn't a Mario movie, I would have no problem with anything they do. The decision to use Daisy, rather than Princess Peach is odd, with her only appearing in the Super Mario Land game at the time, but that can be overlooked. Samantha Mathis is stunninngly cute in this role and certainly not the Princess you expect to be kidnapped in every game.

The film looks fabulous and one thing that is amazing and surprising is just how many people worked on this film who went on (or had done) bigger and better things. Cinematographer Dean Semler had worked on the Mad Max films and won an Oscar for his work on Dances with Wolves. His use of the camera is fabulous and the film looked amazing for it. It is not surprising that Production Designer David L. Snyder had been Oscar nominated for his work on Bladerunner and the style certainly shows.

Editor Mark Goldblatt worked on Terminator 1 and 2, earning an Oscar nomination for the latter. And the Directors Annabel Jankel and Rocky Morton had just come off making the visually stunning Max Headroom TV show. As for the Yoshi puppet? This has got to be one of the best animatronics I have ever seen and though it looks nothing like Yoshi from the game, the use of the long tongue is awesome and when you consider this was before Jurassic Park and is not CGI it is phenomenal.

We could argue that the tone feels off and at times it is too dark or too light or simply will not make up its mind what it wants to be. Maybe that is the problem. The games were aimed at children and so the film probably should be more light, but the plot itself about an evil dictator wanting to take over the worlds is one that is pretty dark. If they had just gone one way or the other it may have been a better film for it. However, as it is, the film has moments of pure genius and stupidity, but I still think it is hugely enjoyable.

The Blu-ray including the original making of, which is a quick look at the making of the film from when it was made. This is fine, but the new hour long documentary 'This Ain't No Video Game' is a great piece and features interviews with almost everyone involved including Producer Roland Joffe and many of those involved in the production.

It is sad that both Bob Hoskins and Dennis Hopper had passed before they could give their opinion of the film, though Hoskins made it very clear how much he disliked the film. The odd thing (and I do wish they had either cut or filmed this again) was actor Richard Edelson (who played Spike) reading a quote from Hoskins after his death about the film. He comments that it is filmed the day after he had died and his almost mocking of what he said was in a little poor taste.

The documentary is great at showing just how many problems the team had from every level in making the film. One comments that there were so many rewrites that Dennis Hopper simply stopped reading the scripts. It shows in the final product and it is a shame as the film had so much potential, just again if you take away the 'Mario' game, you have a pretty decent science fiction comedy.

The set also includes the original Press Kit and a behind the scenes and storyboard galleries. These are fine, though I do wish they had included a commentary as it would have been nice to have heard more from those who created the film.

Super Mario Bros is a film that will divide the audience. If you are a hardcore Mario game fan I would stay away. It is not because it ruins the game, but because it tries too hard to be like it, and fails. If you enjoy silly, action and adventure then you will enjoy this film. If you don't think too hard about it this is full of entertaining moments, amazing visuals and certainly worth a watch. Just don't expect to be playing it again once you see the Game Over sign at the end.