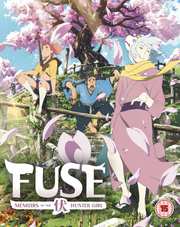 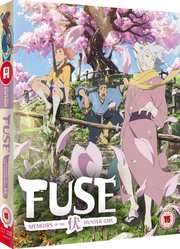 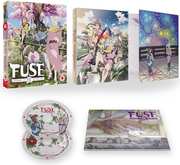 Anime schedules could give you a heart attack if you aren’t careful. It’s best to take them with a pinch of salt when they first appear, as those top-loaded months full of anime usually thin out as titles are delayed, pushed back or just go missing altogether. When I first saw the March schedule, I let out a little whimper of defeat as I saw just how many potential review discs could come through my letterbox. In the end, my postman was spared his hernia, as the delays kicked in, and it seems that this time around it was All the Anime that once again suffered most of the holdbacks. Of the several new titles that they had scheduled for March, it seems very likely that it is only this title that will make its street date. That eases the burden on this reviewer, but fans that eagerly await their favourite anime can start to grumble. I’m just grumbling about the title of the film, which in the US was released by NISA as Fusé: Memoirs of a Huntress, but in the UK and Europe, the title on the disc is Fusé: Memoirs of the Hunter Girl. Alas e-tailers have dropped the accent and the subtitle, and are marketing it as FUSE: Collector’s Edition, which makes me wonder how many amps... 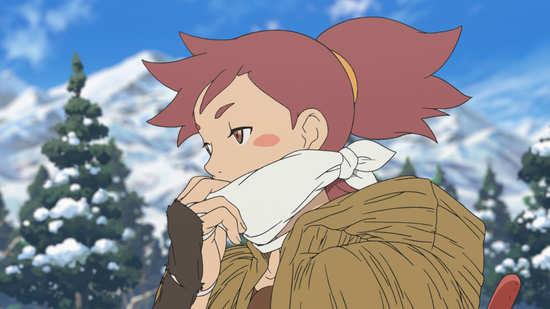 Hamaji Ohyama is an independent girl from the Mutsu mountains who lives off her skill as a hunter. She was trained as such by her grandfather, but following his death, her brother Dousetsu invites her to Edo to live with him in the city. He has an ulterior motive though. The city is being plagued by Fusé, supernatural human dog hybrids that feed off human souls. The Shogun has issued an edict ordering them hunted down, and Dousetsu sees the substantial reward as his ticket to wealth and security. Of course Hamaji’s the hunter in the family, but her first sight of a city is overwhelming to say the least. On top of that, her first day in Edo sees her get involved with Shino, who’s in the middle of running for his life from a bunch of killers. That’s the kind of situation where a boy and girl can form a connection. But when Hamaji and Dousetsu finally start their hunt, there are only two Fusé left to catch in Edo, and as fate would have it, Shino is one of them. 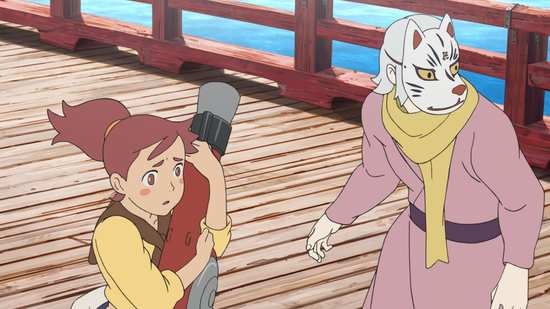 Fusé gets a 1.78:1 widescreen 1080p transfer on a dual layer Blu-ray, and I have to say that it is impeccable. The image is clear and sharp throughout, colours are consistent, detail levels are excellent, and there’s no sign of visible compression or artefacting. In fact I only noticed some slight digital banding in a scene fade, but other than that, the disc was free of that as well. That’s all for the best as Fusé is a breathtakingly beautiful film. It brings to life a somewhat anachronistic Tokugawa era Edo to Technicolor life, rich in detail, vibrant with energy, The character designs are a little old-fashioned, looking almost like early Ghibli with their greater degree of caricature and individuality, while the energy with which they are animated, steps outside the usual anime minimalism and approaches the fluidity of some European animation. As usual for a modern production, Fusé blends traditional 2D and 3D CGI almost seamlessly. It looks fantastic, in terms of character, world design, and especially lighting.

The images in this review were kindly supplied by Anime Limited. 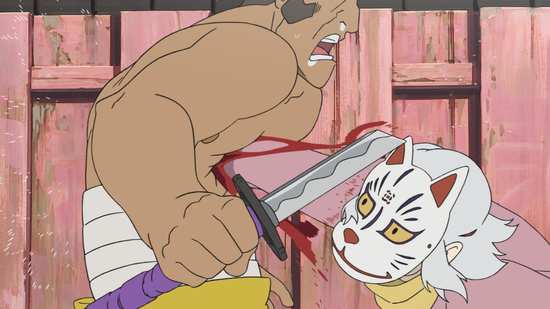 Fusé sounds fantastic too. You have the choice between DTS-HD MA 5.1 Surround and 2.0 Stereo Japanese with English or French subtitles (this is a joint release with @Anime) locked during playback. Michiru Oshima’s soundtrack, heavy on the accordions merely added to the European feel to the animation, and also put me in mind of House of Five Leaves. It’s a solid surround track which brings the film’s action to life, immersing the viewer with some appealing sound design. The dialogue is clear throughout, while the subtitles are timed accurately and free of typographical error. The subtitles do use a somewhat thin white font though, but are really only difficult to read early on in the film, when there’s more clash with background text during the opening credits. There’s also a couple of instances of subtitles and signs clashing (not being on screen long enough to easily read). 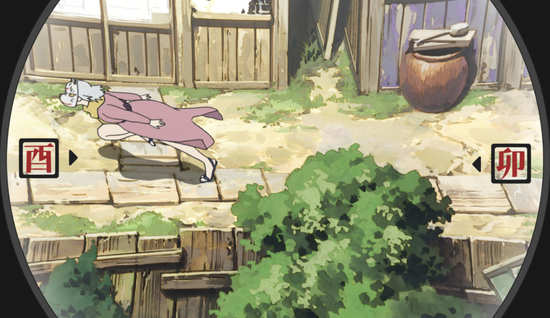 The disc presents its contents with an animated menu. The only extras on the disc are the Japanese Teaser (0:48), and 3 TV Spots (1:17), all in HD, and all without subtitles.

I haven’t seen the retail version, but All the Anime’s blog reveals a very attractive rigid case, with the Blu-ray and DVD held in a digipack, and a 36 page softcover art-booklet. 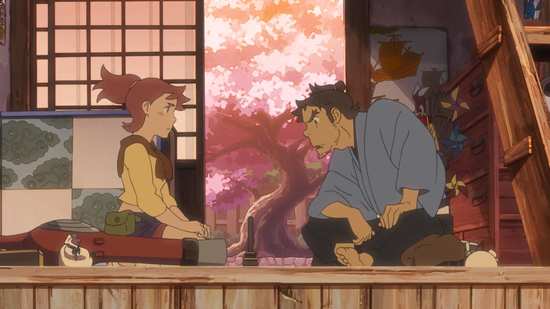 That sounds pretty good, but NISA’s release had one of their double size artboxes for the film, and their artbook, while just 32-pages in length, had double the size for its pages, is hardcover, and also has room for character information and an interview with the director. And having seen the film, it really needs supplementary materials that expand on the story and fill in its historical background, based as it is on epic novel series Nansō Satomi Hakkenden. Without that detail, it’s just a pretty fantasy movie. 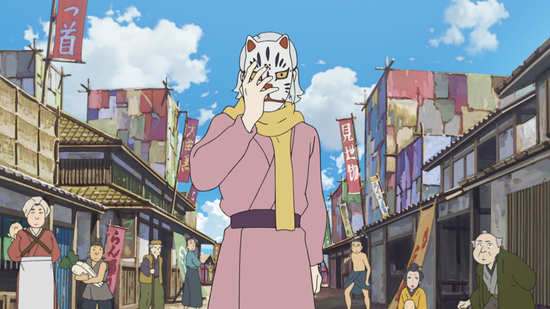 It’s really the visual aesthetic of Fusé that makes it worthy of being in an anime collection. It is a frightfully beautiful film, given the kind of treatment on Blu-ray that gets words like ‘reference disc’ bandied about. Given the usual, more static approach in anime, Fusé’s strong emphasis on the quality and vibrancy of animation makes it stand out against its peers. Unfortunately, the visual aesthetic alone doesn’t make a film, and while Fusé looks fabulous, when it comes to the actual story I came away somewhat underwhelmed. It’s a fun, entertaining film to a degree, but it never quite comes together in a way that would make its story memorable and remarkable. It feels like a collection of great ideas, loosely strung together, instead of a single cohesive narrative, and the resulting film just doesn’t satisfy in the way it should. 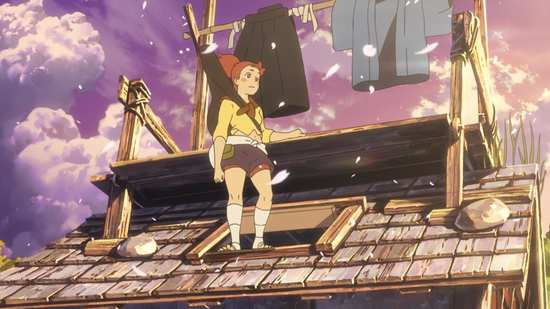 It’s a film that really does need the supplementary material to help tie it together, the knowledge of the folklore and the story that inspired it, which Japanese audiences would probably take for granted. It’s as if someone made a radical adaptation of Robin Hood, and gave it to someone to watch who had no idea about the legend. They’d just get the film at surface value, and for some films that isn’t enough. For instance, there’s a brief bit of exposition regarding the Fusé at the start of the film, explaining what they are and where they come from, but it doesn’t feel sufficient, especially as when this film takes place, six out of the eight Fusé have already fallen to hunters. That makes it feel as if we’re joining the film in the middle, rather than at the start of a story. It’s the Shogun that has put a bounty on the Fusé, and that is a significant plot arc in the film, but one which only becomes clear in the third act, and develops in a way for which there is little foreshadowing, other than a Kabuki interlude in the middle of the film which relates the traditional tale of Princess Fusé. There’s another whole subplot with Dousetsu and Funamushi, a food seller that he has a relationship with, and once again it takes place mostly in the background, really only coming to the forefront towards the end of the film, by which time it’s too late to be invested in it. 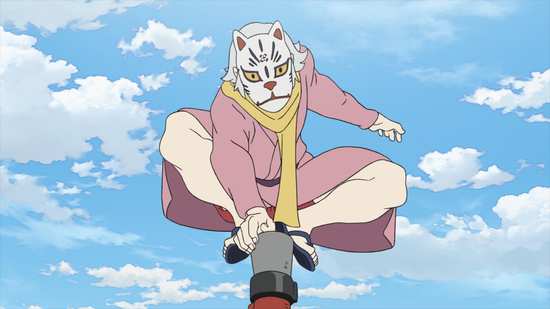 By far the greatest lack of investment for me was in the relationship between Hamaji and Shino, which given that it lies at the heart of the story is a big problem in the film. Shino is a Fusé, one that Hamaji meets prior to hearing of her brother’s plans to join the citywide hunt. She forms a connection with him in the brief moment of peril that they share, and that is supposed to blossom into affection as the film progresses. However, I couldn’t see that progress in the narrative and it seemed more contrived than natural in the way that it eventually transpired. Hamaji also apparently is conflicted between her growing feelings for Shino, and the need to hunt the Fusé, but again this never really seemed clear to me. This is a film that aims to do a lot, but succeeds only at a little. 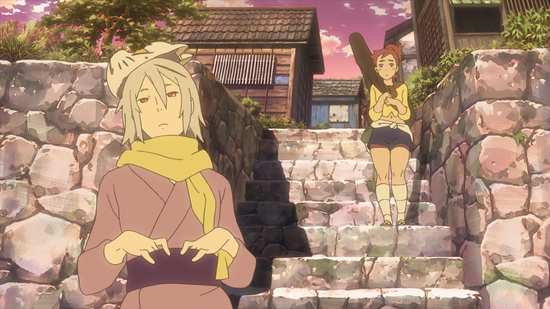 On the bright side, that little is enough to make watching the film an enjoyable experience. The action sequences are brilliantly animated, although the climax seemed rather similar to that of the Ghost Sweeper Mikami movie, and while the character development may happen off-screen, the characters themselves are very likable and entertaining. The film also has a delightful sense of humour to it, a great facility for anachronism and the occasional wink to camera that can delight, and above all it’s entertaining. Sometimes that is all you need from a film, but from Fusé, there really should have been more. But it is devastatingly pretty.