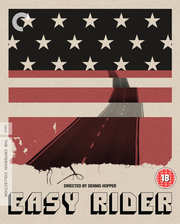 Blu-ray
That Cold Day in the Park

DVD
The Further Adventures of the Musketeers 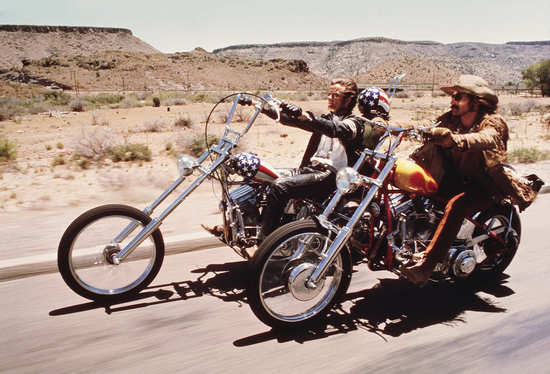 To say I’ve never seen ‘Easy Rider’ before wouldn’t be strictly true. I saw it many years ago, sometime during the post-punk era, and foolishly dismissed it as ‘boring’. I don’t know what I was expecting – perhaps something closer to Russ Meyer’s all girl biker gang movie, ‘Faster Pussycat! Kill! Kill!’.

This excellent new Criterion release has allowed me to watch it again. Properly this time. With low expectations, the film blew me away. (It’s even got me speaking like Dennis Hopper).

To say the film is sublimely beautiful would be an understatement. From a cinematography perspective, this is as good as it gets, despite being a low budget movie with a crazed ‘hippy’ (Dennis Hopper) at the helm, aided and abetted by the chilled yin to his yang, Peter Fonda who produced as well as co-starred in the film next to Hopper. When you view the extra features on the disc (and you really should), you’ll get a sense of how remarkable that such a great film emerged from such chaotic cluster of creative youngsters. This is not your standard low-budget fare. It’s a thing of beauty that had me completely converted. As soon as it finished, which it did in the flick of an eye, I was ready to press the start button and watch the whole thing over. Which is something I rarely, if ever do. (For the record, I didn’t do it here either but I could have done…you get the point?).
Indeed, I enjoyed the film so much – everything about it, from the naturalistic dialogue, the odd pace, the beautiful landscapes, the iconic bikes and the music – that I nearly gave this disc the full ten out of ten points available for such things. The only reason I didn’t was to avoid getting caught up in my own hype at having discovered another one of those precious films that become part of exalted ‘watch again’ stack. After all, I’d ‘seen’ the film before. I just hadn’t watched it properly.

Ultra-cool Wyatt (Fonda) and intense Billy (Hopper) manage to set up a drug deal that sees them biking the length of the country – from Mexico to New Orelans. They know that money buys freedom and so the two free-wheelers take to their iron horses with Fonda’s being what has become the most iconic chopped Harley ever, with unfeasibly long front forks, huge glistening alloy wheels and a teardrop gas tank painted with the stars and stripes.

Their journey takes them through some incredible scenery as they make their way through Nevada and beyond, through small time remote America.

Stopping at a local farm, they eat with a remote, poor family which appeals to Wyatt’s hippie idealism. Having picked up another hippie-dude on route, they stop at his commune which again Wyatt eases into before being dragged back to the journey by uptight Billy, keen to get their stash converted to cash and then on to the good life. 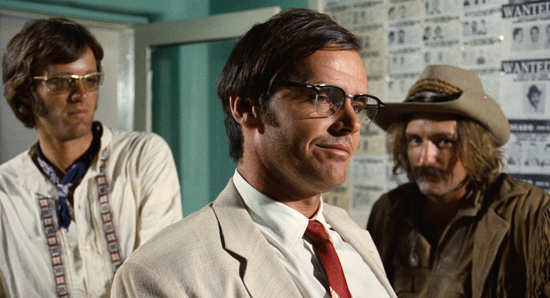 Wherever they stop there seems to be hostility from locals, perhaps threatened by their long-hair and shiny bikes. In one small town, they wind in Jail, hooking up with a young lawyer (Nicholson) who happens to be an alcoholic. He decides to take the journey with them, trying pot for the first time and pondering on the very nature of the universe.

As they take to their ‘beds’ under the open sky, some locals decide to pay a visit and they beat Nicholson to death in his sleep.

Under a now dark sky they continue their journey. Eventually they arrive in New Orleans in time for the Mardi-Gras and, now rich with cash having completed their deal, along with a couple of prostitutes, they go on a wild acid trip through the streets of New Orleans, with some of the craziest footage ever committed to celluloid reflecting their altered state.

But all is not well. From the initial easy going free-spirit, the narrative now carries a dark shadow, as if the idealism cannot last. Like the hippie movement itself, it doesn’t. Hard, cruel reality intervenes and the film ends on what the characters themselves would describe as a massive downer. I won’t spoil it here, but even if you’ve seen it before, it won’t lose any of its potency.

Throughout the film are stunning vistas, open rocky mountain highways set against purple evening skies – that sort of thing – often accompanied by The Byrds with their beautiful, mellow West-Coast sound.

Easy Rider was the first of a string of huge, so-called ‘indie’ films, where the creators were freed from the shackles of control of the big studios. In the event, Easy Rider became a great film almost despite itself – a perfect storm of talent that, working together, produced something far greater than the sum of its parts. Originally, Hopper’s edit lasted four hours – far too long. When Fonda recut the film to 90 minutes, Hopper complained that he’s turned it into a TV show. Later, when viewing the film again at the Cannes Film Festival, where it won several awards, Hopper agreed that Fonda had been right. Whatever the case, the film you get here is absolutely top notch.

This is my very first Criterion. Of course, their reputation in the US is immense. Based on this release, well deserved. Apart from the breath-taking transfer, there are several excellent contextual extras. Indeed, although you don’t get the ‘Easy Riders, Raging Bulls’ documentary, they more than make up for it with two documentaries about the making of the film (one from 1995 and one from 2009, going over the same ground with the same people who are all a little bit older, but telling the same old tales). You also get two complete audio commentaries; one from 2009 featuring Dennis Hopper and an earlier one featuring Hopper, Fonda and production manager and friend, Paul Lewis. Finally, there’s a short television extract from 1969 showing Hopper and Fonda at the Cannes festival where the film really cleaned up.

I cannot recommend this release enough. Straight in the McLean Top 10 for this year I think.