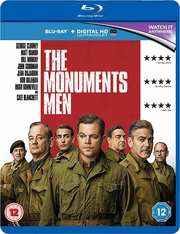 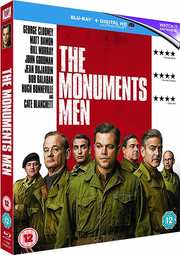 Blu-ray
Tiger And Bunny: The Beginning

Article
War drama The Final Sacrifice out on DVD this January

Review for The Monuments Men

Not too long ago, Jamie Oliver made an unappetising dish of ‘jerk’ rice, and the social media-sphere erupted with accusations of cultural appropriation. That’s the world we live in now, driven by over-reaction and hyperbole, misplaced hurt and displacement. It’s a world where a Western pop-star daring to use a tabla in a record would be accused of racist-Imperialism. People need to read more history. Now the Nazis really did commit cultural appropriation on an epic scale. In the grand scheme of things, it may be the least of their crimes, but Hitler’s personal need for aggrandizement and possession led to the Nazis looting all of Europe of its cultural treasures, its greatest art and literature, all to be grandly displayed in some never built Hitler museum. Even recently, looted art from back then was being found and returned to the descendants of the original owners. Compared to that, a pretentious TV cook putting the wrong spice in the wrong food is hardly an issue.

As the course of the war changed, and Germany was pushed back through Europe, Hitler ordered the wholesale looting of museums, churches and galleries, and the destruction of what couldn’t be taken. At the same time, the relentless Allied advance on land and by air wasn’t exactly paying heed to sites of historical significance. When scholars pointed this fact out, the Monuments Men were formed to protect and return the stolen art, given President Roosevelt’s blessing. But with no able-bodied soldiers spared for the unit, they were staffed mostly by art scholars and architects, and they certainly weren’t taken seriously, at least not at first. This film is based on the true story of the Monuments Men.

The Monuments Men gets a 2.40:1 widescreen transfer. It’s a nice clean transfer of a modern film, most likely shot digitally. Certainly the clean image, the lack of film grain and a certain uniformity to the experience suggested so. Nevertheless, the film manages to capture the period well, in terms of costumes and production design. No doubt the more expansive scenes of the Allied invasion were accomplished with some CG trickery, but the seams never showed. You have the choice between DTS-HD MA 5.1 Surround English, Dolby Digital 5.1 Surround English Audio Descriptive, Spanish, Portuguese, Czech, Hungarian, Polish, Thai, and Turkish, with so many subtitles that I lost the will to jot them down. The surround is done well enough, what few moments of action there are make a suitable impact, and it generally does enough to make the film feel immersive. The dialogue is clear, expect for a couple of incomprehensible accents.

You get one disc in a BD Amaray, and you’ll also find a by-now pointless UV download code. After an anti-piracy thank you, the disc autoplays trailers for The Book Thief and The Secret Life of Walter Mitty, before booting a static menu.

There are a handful of featurettes on the disc.

In Their Own Words last 12:12 and you get to hear from some of the real Monuments Men.

A Woman Amongst “The Monuments Men” lasts 4:24, and briefly relates the story of Rose Valland, the woman who inspired the character of Claire Simone in the film.

George Clooney’s Mission lasts 5:10 and looks at the star/director/writer at work.

Marshaling the Troops lasts 7:54 and is the usual back-slapping, light-hearted cast featurette.

There are two deleted scenes running to a total of 2:04.

Finally there is the theatrical trailer.

I guess it’s my own fault. I have recently been watching Band of Brothers, and The Monuments Men takes place in many of the same locations, during the same events, and the two productions just don’t compare. The Monuments Men is more a light-hearted comedy drama, capturing the same cast ensemble ease as in films like Ocean’s Eleven, even if it is a completely different genre. It’s an easy listening version of the Second World War, and perhaps my poor choice in timing had me thinking momentarily of Jerry Lewis’ Which Way to the Front, which effectively set World War II in the sixties.

The Monuments Men isn’t here to tell us of the horrors of war, although it doesn’t shy away from moments of tragedy and loss. Its whole mission is to take a look at that one aspect of the war that is usually overlooked by cinema; the Nazi looting of national art treasures. As mentioned, this film is based on a true story, although it’s one of the films where events and names have been altered for dramatic effect. It gives you the gist of what happened, not how it actually did. It’s true that a group of academics were formed into a unit whose mission was to preserve artefacts and buildings of artistic significance, and that they were instrumental in finding and repatriating most of the stolen loot. That they looked like Matt Damon, George Clooney, Bill Murray, and John Goodman is less likely, and the light comedic hijinks and male-bonding that ensued is very much there for the sake of entertainment.

The Monuments Men has one significant problem. It’s basically that it tries to do too much. It efficiently sets up the premise, and goes about recruiting the right men for the job, getting them through training and into France. Their initial brief is to find and restore the Ghent Altarpiece, and that is quickly joined by the Madonna and Child from Bruges. At the same time, there is a whole heap of looted masterpieces from Paris which have to be recovered, and this sees one of the characters in the city, trying to convince a rather icy spy to help them. With the Allied advance it sees the Germans in full retreat, so it becomes a race against time to retrieve the art. And then it becomes a race against time to beat the Russians to it, who want it all as war reparations, regardless of the original owners. On top of this we have the Allied forces initial disdain for this army of professors.

Despite all this story that it wants to tell, The Monuments Men really does unfold at a languid pace; it’s as if no particular story arc gets the intensity and drama it really deserves, and the light comedy of its character interactions is really all that there is to the film. It is a nice piece of entertainment, and as an adaptation of historical events it invokes an idle curiosity, but it lacks the weight that a film of its ambition really needs.

Despite my earlier reference to Jerry Lewis, and a sense that sixties war films tended to have more fun with history than modern films, there is one film from the sixties worth mentioning with reference to the Monuments Men. This may be a rarely covered aspect of the war, but the Burt Lancaster film The Train has done it before, and done it a whole lot more effectively than this film. That too was based on a true story of Nazis stealing art from Paris at the end of the war, but this time it was about what the French Resistance did to thwart the Germans. The whole film was infused with the conflict of ideas, the idea of fighting to save lives and the idea of fighting to save art, and the bittersweet triumph that comes with making sacrifices to achieve the latter; an ephemeral victory that is hard to explain. With The Monuments Men, that is an observation that is left only for the epilogue; a moment of seriousness at odds with the film’s light tone. The Monuments Men is an interesting, watchable take on the story, but you really should seek out The Train.