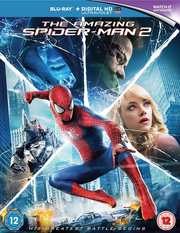 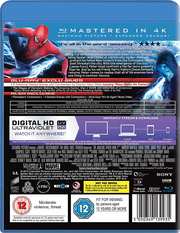 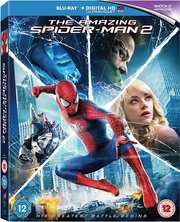 Blu-ray
Spider-Man Into The Spider-Verse

Blu-ray
Valerian and the City of A Thousand Planets

Review for The Amazing Spider-Man 2

Just two films in a franchise before it gets canned! I’d expect that in the seventies and eighties, where studios tended not to have a lot of luck with sequels, but this is the 21st Century, where mass market movie making is a carefully honed production line, and franchises are the movie companies’ guaranteed cash-cows. The first Spider-man series got as far as the third movie before the rot set in, so The Amazing Spider-man 2 must have been spectacularly bad for Andrew Garfield’s take on the wall-crawler to have been dropped. Or so you might think.

Back when Tobey Maguire wore the spandex, the Marvel franchises were split by studio and off in their own separate realities. But in 2008, when Iron Man came out, Marvel embarked on the long journey of taking all of their properties back in house, and launching the Marvel Cinematic Universe, hitting a new apex this year with Avengers Endgame. So when The Amazing Spider-man came out in 2012, the plan must already have been in place to bring Spider-man in to the MCU, which eventually happened with Spider-man: Homecoming. So maybe 2014’s The Amazing Spider-man 2 is that rare, decent entry in a franchise caught up in circumstances it couldn’t control. Let’s find out.

Things couldn’t be better for Peter Parker, in love with the gorgeous Gwen Stacy, and they couldn’t be better for Spider-man, adored as a hero by the people of New York. Only Peter’s haunted by the memory of Gwen’s father, whose dying wish was that he stay away from his daughter. So the perfect relationship is anything but. During one of his daring escapades, Spider-man saves the life of Max Dillon, a non-descript and un-noticed electrical engineer for Oscorp and gives him a pep-talk. This has unexpected consequences when Max is electrocuted, and falls into a tank of genetically modified electric eels. And when Norman Osborn dies, his son Harry returns to take over the company only to learn that he’s also inherited the disease that killed his father, and a potential cure lies in Spider-man’s blood. And Peter’s still obsessed with finding out what happened to his parents to cause them to abandon him.

There’s nothing to complain about with the transfer on the disc, which is proudly proclaimed to be mastered in 4k. The 2.40:1 widescreen 1080p image is gloriously sharp, and clear, with rich and gorgeous colours. Detail levels are excellent, and there is no sign of compression or banding. The audio too rocks, with a DTS-HD MA 5.1 English surround track really immersing you in the action, keeping the dialogue clear, and making full use of the soundstage. There is a DTS-HD MA 5.1 Surround French track, and a DD 5.1 English audio descriptive track as well, and subtitles in a decent smattering of languages.

Unlike the first film, you get just one disc in the case this time, and there is a UV code as well. It’s one of those Java discs with animated menus, and that hold the movie position in player memory after being ejected. The animated menu somehow manages to put so many plot points into the looped images that you may as well not watch the film.

On the disc you’ll find the audio commentary with the filmmakers, Alex Kurtzman and Jeff Pinkner, writers, and Matt Tolmach and Avi Arad, producers.

You get 13 Deleted and Alternate Scenes running to 23:01. There is an optional commentary here from director Marc Webb.

The Wages of Heroism: Making the Amazing Spider-man 2 is what you would expect, the feature-length making of, which runs to 103:42. It’s split into six parts for easier navigation.

The Music of Amazing Spider-man 2 with Director Marc Webb lasts 8:09.

Finally there is the Alicia Keys – ‘It’s On Again’ Music Video, which lasts 3:49.

The Amazing Spider-man 2 stinks. There’s no conspiracy theory here, no secret plan to nobble Sony’s hold on the franchise so that Spider-man can be brought in-house; unless Marvel deliberately seeded saboteurs into the movie making process. Frankly, I’m not that much of a conspiracy theory nut. The weak point of any movie begins with the writing, and quite frankly I should have known what to expect when I saw the names of Roberto Orci and Alex Kurtzman listed as writers. Gone was the Harry Potter magic of Steve Kloves from the first film, and instead we get the Hollywood blockbuster hacks, a couple of writers who for some daft reason get tapped for every summer blockbuster that comes down the pipe, and have never failed to deliver less than abject mediocrity at best, complete drivel at worst. These are the writers behind Transformers: Revenge of the Fallen, a film that memorably had Mark Kermode slamming his head into a pipe. They also came up with the Star Trek reboot movies, Cowboys and Aliens, and that Tom Cruise Mummy movie that everyone tries to forget exists. The Amazing Spider-man 2 was never going to be good.

What’s surprising is that it’s still better than Spider-man 3. That’s because the one thing it doesn’t do is ruin the Peter Parker/Spider-man character. He’s still the wise-cracking, web-slinging super-hero in spandex, and the troubled teen otherwise. The relationship with Gwen Stacy is handled well, and there is a really strong and interesting arc as he tries to learn more about his parents and why they left him behind.

That’s it though, as all else goes downhill. This film makes the same mistake as Spider-man 3 in over-egging the villain pudding, giving us storylines from origin to downfall for both Electro and Green Goblin; the latter feeling a little too compressed, while they also manage to squeeze a little Rhino in for good measure. By far the worst thing about this film is Jamie Foxx’s Electro, who appears to be channelling The Riddler from Batman Forever. That’s never a good move. The Amazing Spider-man had a slightly grittier, more realistic feel, but Electro in this film belongs in a more comic book, primary colour movie, and the character has no nuance.

Harry Osborn’s return looks promising, even if he is a little too emo. He still has more personality in his first five minutes than James Franco exhibited in all three Tobey Maguire movies. But his story arc is rushed, from return and father’s death, to renewed friendship with Peter, to betrayal and falling to the dark side. And the Green Goblin is a physical grotesque, a literal monster as compared to Norman Osborn’s more psychological monster of the first trilogy.

With all this going on, all these story arcs and plot threads, it’s no surprise that even with its 2 hour and 20 minute runtime, The Amazing Spider-man 2 feels like a hodgepodge, a jammed together mish-mash of ideas and cool bits. It’s really hard to find a narrative arc that defines it as a movie; it never really feels like a whole. It’s just a melange of action set pieces that fly past at a breakneck pace, a summer movie thrill ride, which is what Alex Kurtzman and Roberto Orci excel at, movie making by the numbers, no heart or passion required. And not that it really matters at this point, but in their brainless trend of writing ‘tech’ on a script and filling in later, you get a nonsense explanation of electricity generation in this movie that rivals Red Matter from Star Trek, and Magic Blood from Star Trek Into Darkness. We’re not talking astrophysics here, this isn’t subatomic theory; electricity has been generated on an industrial scale for over a hundred years now. This is basic stuff. You have to make up absurd hand-wavium pseudo science to explain electricity generation? Please stop writing movies and TV, please...