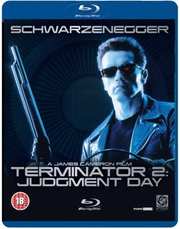 Blu-ray
Terminator 3: Rise of the Machines

Article
Dawn of the Dead on Blu-ray in October

Article
Who ya gonna call?!...

Let’s try this again. A few years ago, I tried watching Terminator 2: Judgment Day on Studiocanal’s Skynet Edition disc. I say tried, as it took me 5 hours to watch a 2 hour and 15 minute film. The horribly authored mess not only had a sound sync delay, it also kept crashing my player. That’s before we even get to talking about the DNR, which was almost Predator levels of bad. By that time, it was almost too late; the first Blu-ray release from 2008 was out of print, but I finally managed to get a copy second hand. No java, no sound sync error, no player incompatibility, no extras, you just put the disc into the player, press play and enjoy. That’s what home cinema is meant to be like (except the lack of extras of course). Let’s give Terminator 2 another spin.

Set 10 years after the events of Terminator, the sequel continues the story, as Skynet makes another attempt to change the future by eliminating its key threat in the past. It’s sent a shape-shifting, liquid metal T1000 Terminator back to kill John Connor as a child. But just as before, the resistance have sent a protector back to the past as well, only this time it’s a captured and reprogrammed T800 Terminator. With this new knowledge from the future, Sarah Connor and her son actually have the chance to stop the nightmare future of Judgment Day ever coming to pass.

This disc presents only the Special Edition of Terminator 2: Judgment Day – 153:26.

This first release of Terminator 2 on Blu-ray from Studiocanal apparently uses the same source as the DVD release to create its HD master. The 2.35:1 widescreen image is impressive at first glance, clear and sharp with consistent colours. Detail levels are good but not razor sharp, but grain is present, and the experience is filmic and organic. A big step up over the Region 2 DVD is that the Director’s Cut footage is consistent with the Theatrical footage (not an upscale from 480i to 576i and NTSC-PAL conversion as on the PAL DVD). You can still see that this film does need a new master, with a few flecks on the print, some scenes a little soft, moments where the colours can seem oversaturated, and with whites seeming blown. It’s still better to look at than the Skynet Edition though.

You get a DTS-HD MA 5.1 Surround English track. The audio is fine, really immersing you in the action, and making Brad Fiedel’s score felt. There is more than enough action to be getting on with here, plenty of beefy guns and big explosions to get your subwoofer woofing. The dialogue is clear throughout, and the balance is good enough not to require you to ride the remote through the movie. There aren’t any English subtitles with this release.

The Skynet Edition was packed with extras that all failed to work on my player. This release has no extras, which for me amounts to the same thing.

You get one disc in an Amaray case, and on insertion you have the choice of Australian, Spanish, French, Dutch, and UK menus. Each gets its own copyright warning screen, and the European options will flash up player locked subtitles in those languages during the film.

The disc boots to an animated menu, and from a bonus menu, you can access some calibration screens to set up your TV, and make sure your home cinema is wired up correctly.

That is so much better. This is the version to get in the UK judging by all perceptions of the other versions on Blu-ray available here, if only for the lack of DNR. Sure, it looks its age, with a slightly creaky, unrestored print, but it’s a big improvement over the original DVD, which is what this Blu-ray malarkey is all about when you get down to it. A nice, simply authored disc also presents no problems when it comes to playback. With the Skynet Edition, it boiled down to what would die first, my player, me, or the disc after I’d killed it in a microwave. With this disc, you just insert, press play, and enjoy just over 2½ hours of Terminator goodness.

Almost... I’ll be honest. I made it to the 2 hour 15 minute mark before the Sandman caught up with me. This disc would have been my perfect Terminator 2 purchase if it had been the Theatrical Version. Alas it is instead the Director’s Cut/Special Edition, which adds another 20 minutes of character beats, and feels like it takes 40 minutes before the film actually starts. It’s indulgent, and overlong, and puts the brakes on a decently paced sci-fi action thriller. None of the added footage is essential to the plot, it’s fair for character development, and there are some cute scenes, but they slow things down so much. I don’t need to see John Connor teaching the Terminator how to smile, and much as it is good to see the Kyle Reese character again, it’s only in a dream sequence that is effectively repeated later in the film.

Terminator 2’s extended version is a decent enough film; if I remember to watch it at a time I am less likely to fall asleep. After all, I loved this version when I had it on VHS. I think this will do now. No more versions of Terminator 2 will be purchased in this household. The original Terminator on the other hand, that’s a classic that I will always want in top quality, but the sequel hasn’t dated as well. Let’s face it, young John Connor is an annoying little snit.