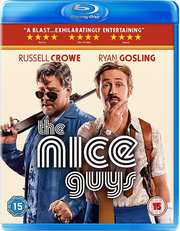 Blu-ray
Yona of the Dawn Part 1

Review for The Nice Guys

The Nice Guys gets a 2.40:1 widescreen 1080p transfer with DTS-HD MA 5.1 and PCM 2.0 English audio options. You also get optional HOH English subtitles. Another impeccable transfer leaves me nothing to really talk about. The image is clear and sharp, and really well detailed, while the surround is put to use bringing across the action and the period music soundtrack. The filmmakers have really done a fine job in recreating the seventies, although nit-pickers will and have been picking out inconsistencies to add to IMDB’s goofs section. The costumes, the production design, even the smog all looks as if it belongs in the seventies, and even the film stock (assuming it was shot on film) and the cinematography has a period feel.

You get one disc in a BD Amaray case, and the disc plays a trailer for War on Everyone.

Always Bet on Black lasts 5:24 and is a quick profile of the writer/director.

Worst Detectives Ever lasts 6:14 and is a brief Making Of.

The Cast Interviews lasts 11:04 and there’s a smidge of repetition from the other two featurettes.

Finally there is a 1:28 Photo Gallery Slideshow.

We actually get more extra features than the US release.

The Nice Guys is set in 1977, at the height of the Energy Crisis, with the queues at gas stations, the Day-Glo fashions and the prevalence of disco, but made in 2016, its story turns out to be quite timely as well, although to go into detail would entail spoiling the film. But when it comes to this particular genre, Shane Black is a very safe pair of hands given that he practically created it. It does mean that The Nice Guys has a comforting familiarity to it, although it never feels like a stale rehash. But the mismatched pairing, the violent thriller, the conspiracy, and most importantly the sense of humour have been Shane Black’s stock in trade since Lethal Weapon, and The Nice Guys is just another variation on the theme.

The big difference here is the 70s setting, although it’s not just feeding nostalgia for disco. Just like the TV series Life on Mars, this is detective work that harks back to an age pre-internet, pre-PC, and pre-smartphone. These are detectives that have to get physical, have to do leg work, and have to ask questions. It’s a much more visceral sleuthing experience when the answers aren’t on Google, and there’s no CSI lab running off DNA tests in a matter of hours.

The joy comes in the characterisations, with Holland March a properly cynical private detective, a functioning alcoholic, whose only positive attribute is his relationship with his daughter. He would be wholly mercenary was it not for Holly serving as his conscience. Jackson Healy on the other hand is a thug with aspirations of being more. He gets paid to pound on people until they get the message he’s delivering, but he’d much rather make a more positive contribution to society. As a result, Holly is more amenable towards him, despite the fact he breaks her father’s arm. This combination of soused cynic and reluctant optimist makes for an interesting and colourful combination on screen, which becomes even more turbulent when the thirteen year old Holly insists on tagging along for the investigation (which starts at a porn party).

The Nice Guys is a whole lot of fun, similar enough in tone to those other Shane Black, buddy ‘cop’ thriller comedies to feel comfortable, but getting a degree of originality from the seventies setting. The action is accomplished, the characters are developed well, and the dialogue zings. The Nice Guys is well worth seeking out.