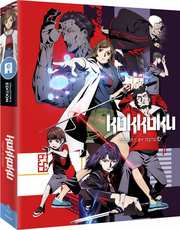 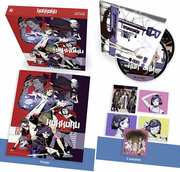 Blu-ray
Pigtails and Other Shorts

I used to say that streaming was like Free To Air television for me, a chance to try before I buy. If I saw something I liked, I’d get in the best possible quality, without adverts, and with extra features, to watch at my convenience. That usually meant discs, or once upon a time, VHS. But the streaming landscape has become unrecognisable in recent years. What used to be just one site, Crunchyroll has fragmented into several. As well as Crunchyroll, you now have Funimation Now, HIDIVE, and as the big corporations have caught onto this anime idea, Amazon Prime and Netflix as well. And with more and more companies investing in the anime they stream, a lot more of these shows are exclusive to single sites. If you consider that the average monthly subscription to one of these sites is between £5 and £10; you can begin to understand why physical media is under such threat. If you want All the Anime to coin a phrase, you’ll be spending upwards of £30 a month on streaming services alone, on top of your broadband connection. The Kokkoku anime series was exclusive to Amazon Prime. I’d never even heard of Kokkoku before the check discs showed up. 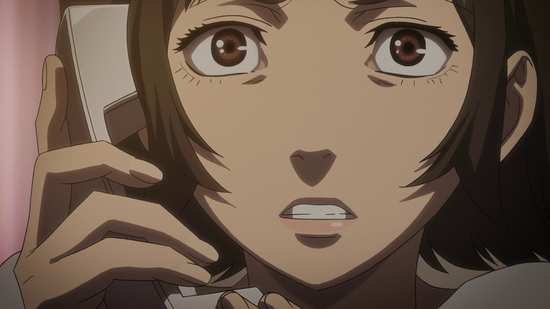 Juri Yukawa has ambitions. She wants a good job, and to move out of the family home. The only problem is that she keeps failing her job interviews. You can see why she wants a better life though, as her home-life is punctuated by a long-term unemployed father Takafumi, a NEET brother Tsubasa, and a single-parent older sister Sanae. The only bright hope for the family is her sister’s little boy Makoto, and with grandpa thrown in, it sounds like the perfect set-up for a sitcom. 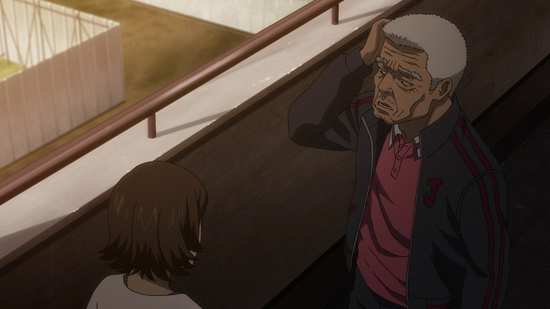 There’s not a lot of comedy though when Tsubasa and Makoto are kidnapped. The thugs call and demand a ransom which seems unlikely for such an impoverished family. But then grandpa reveals the family secret to Juri. He knows a magic spell to freeze time, to take them into a world he calls Stasis, and it should be easy to find Makoto and Tsubasa and snatch them back from the time-frozen kidnappers. But then they learn that they are not the only people moving around in Stasis... 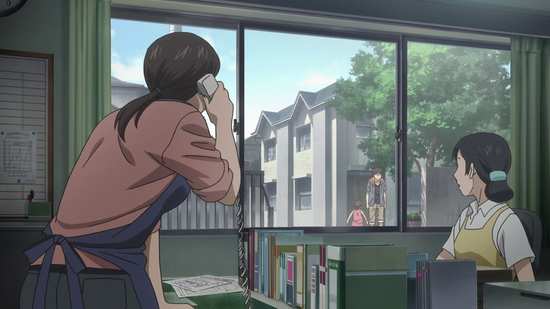 12 episodes of Kokkoku: Moment by Moment are presented across two Blu-ray discs from All the Anime.

Disc 1
1. The First Moment
2. The Second Moment
3. The Third Moment
4. The Fourth Moment
5. The Fifth Moment
6. The Sixth Moment
7. The Seventh Moment
8. The Eighth Moment
9. The Ninth Moment 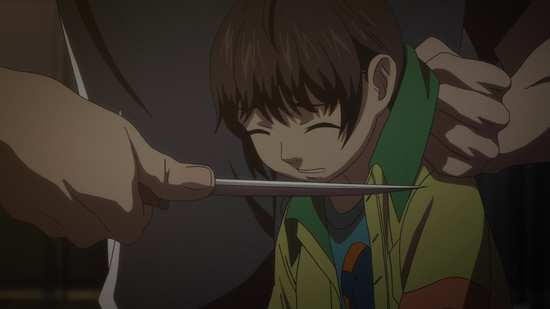 You get a 1.78:1 widescreen 1080p transfer on these discs, which is great to look at, clear and sharp, with strong detail, and no signs of compression, aliasing or even significant banding. The character designs are well thought out and memorable, while the world design is rich with detail. The world in Stasis has a different, muted colour palette compared to the real world, but with the way the story unfolds, you never really get to appreciate the contrast. One oddity in such a sci-fi thriller series is the fan-service end credits sequence; it certainly feels out of place. 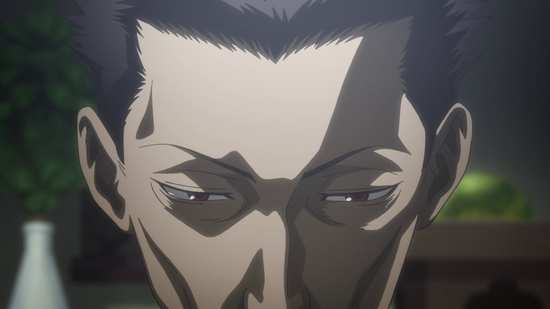 You have the choice between DTS-HD MA 2.0 Stereo English and Japanese with player locked English subtitles and a signs only track. The dialogue is clear, the stereo makes fair use of separation to bring across the action sequences and the show’s music. The subtitles are accurately timed and free of typos. This must have been a godsend when it came to the sound mixing budget, as Stasis is a silent domain, with no foley effects required, just dialogue, and the odd moments when the mobile characters interact with the environment. 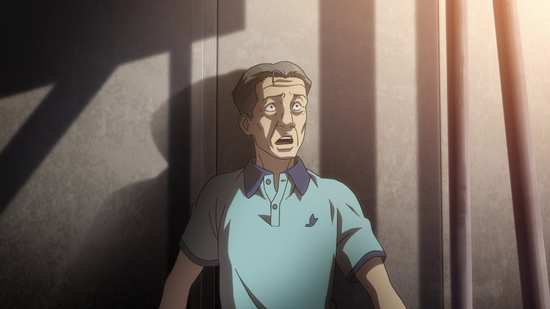 The discs present their content with static menus and each episode is followed by a translated English credit reel.

Disc 1 autoplays with a short promo for the HIDIVE streaming service. 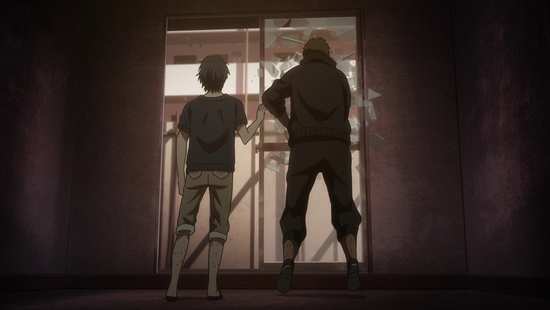 You get two textless openings and the textless end credit sequence, 3:08 minutes of Japanese Promos and trailers for Doreiku the Animation, Parasyte – The Maxim –, Land of the Lustrous, and Made in Abyss. 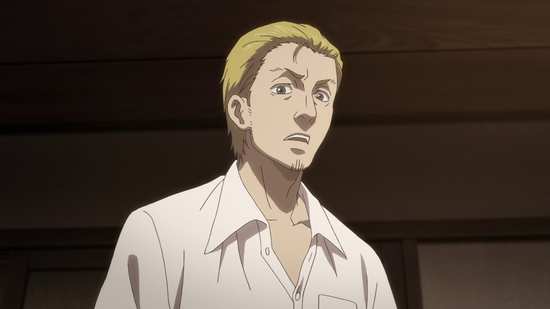 I had my misgivings when it came to the big companies like Amazon and Netflix taking anime onto their catalogues, and not only for the increased drain on the resources of hard-up anime fans compelled to subscribe to yet more streaming services. Most anime is an episodic affair; I mean, you couldn’t marathon something like One Piece or Naruto without threatening your sanity, and there are plenty of shows out there that are best served by the weekly release format. Amazon Prime and Netflix on the other hand thrive on binge-watchers, people who’d sit down and blitz through a season of episodes in just a couple of days. Well it turns out that they are pretty savvy about this. The few Netflix anime shows I have seen work best when binge watched, shows like Ajin and Knights of Sidonia, and it turns out this Amazon Prime anime, Kokkoku: Moment by Moment is ‘one episode more’ addictive too. Each episode ends on enough of a cliff-hanger that it demands that you watch the next to find out what happens. 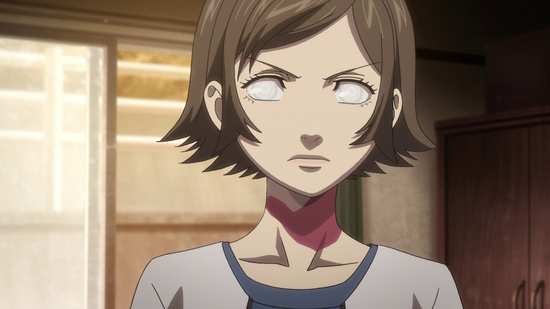 It’s such a simple premise, the idea of freezing time, and somehow existing in that moment of frozen reality. Who hasn’t imagined doing just that, just stopping the world and fixing something about to go wrong, or indulging a little devil and performing some petty larceny? Oh, just me then... It’s also a staple of sci-fi and fantasy, and before the age of digital effects, the bane of many an extra forced to hold still for several seconds or minutes during a scene. I can think of Star Trek episodes and Red Dwarf episodes that all played with the concept, and of course there was the final scene of every Police Squad episode. 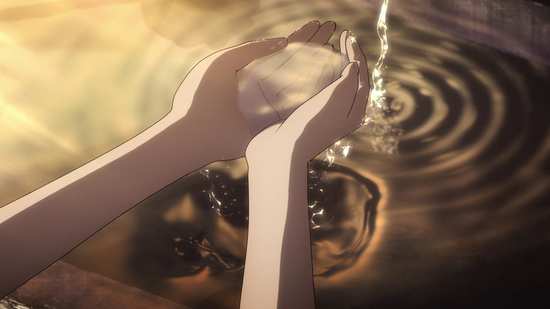 Kokkoku takes this idea and builds a somewhat logical reality out of it. A mystical stone is the means by which people can access ‘Stasis’, and the Yukawa family has a natural affinity for this, something that the grandfather has kept secret from the other members of the family. It turns out that it’s not a power to be used lightly, but they are forced to use it when two of the family are kidnapped. They enter Stasis and the time just freezes. They can still interact with the world, and only their morality stops them from committing petty crimes. But it turns out that Stasis works to defend the frozen and living from harm. If you try to kill someone frozen in time, a Handler or Herald appears to kill the would-be perpetrator. 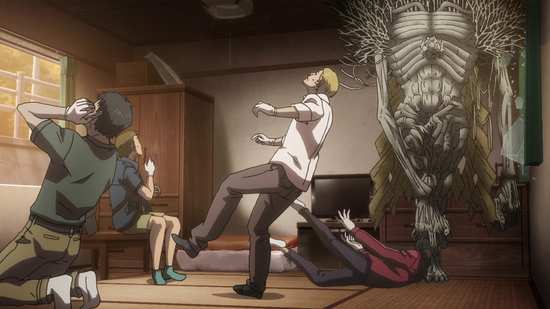 This raises the question as to where the Handlers come from, and this leads to a whole tragic story arc regarding one of the characters, and an added threat to those trapped in Stasis. Juri’s brother and nephew were kidnapped by a religious group called the Genuine Love Society, who with the aid of a lesser stone has managed to enter Stasis. They hired thugs to grab Tsubasa and Makoto in the real world, and having figured out the Yukawa family secret, expect the rest of the family to enter Stasis to rescue them ‘the easy way’. They want the real stone that Juri’s grandfather has so that they can enter and leave Stasis at will, increase their power, and ‘help’ the world as so many religious cults want to. They’ve also brought some of the thugs into Stasis with them to do the violent things that they are too squeamish to do, and those thugs lack the morality to hold back when ‘playing’ with the frozen. But the leader of the Genuine Love Society has his own motives to seeking power in Stasis. It’s all a trap for the Yukawa family, but it turns out that their affinity to Stasis has gifted some of them with powers within Stasis, and it becomes an evenly balanced fight as they try to rescue their relatives and thwart the villains. 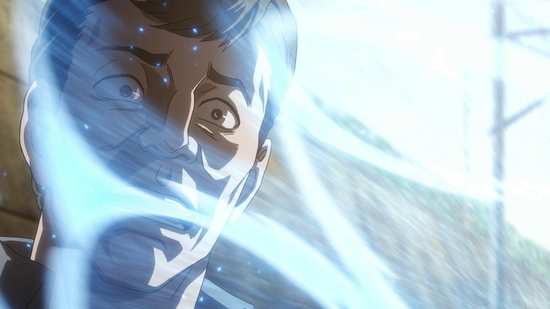 Kokkoku is a great show that is a compelling watch, tempting you with just one more episode. Of course like many time-warping sci-fi fantasy concepts, it starts to fall apart once you apply some thought to it, but generally the show holds together well. The only disappointment for me was with the show’s conclusion, which went a little too Deus Ex Machina for me. It is a small nit to pick, and otherwise this show is well worth expending a few hours on.