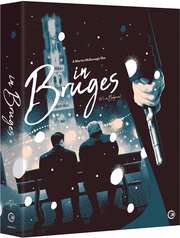 Review for In Bruges [Limited Edition]

I’ve often mentioned my little foibles when it comes to the entertainment I consume. ‘I’m not a fan of horror’ is how I begin all of my horror reviews, I often reiterate my disdain for the modern, production line Hollywood mainstream, all comic books and toilet humour, and then there is my unerring ability to pick those TV shows to watch, that are cancelled before their time. One thing I haven’t mentioned is my tendency to discover the good movies long after everyone else. I’m not too trusting of reviews, which is ironic given how many I write, and word of mouth gets conflated with hyperbole. When people really fall in love with an underrated film, when films unexpectedly start picking up awards, I tend to shy away. It’s only with re-releases and bargain buckets that I finally get on the bandwagon. My favourite movie, Blade Runner, I only discovered years after the 1991 Director’s Cut. I first encountered Trainspotting in the mid-2000s, after the Zeitgeist had moved on. I also first discovered The Breakfast Club long after I was of an age when I could have best appreciated it.

Back in 2008, everyone was raving about In Bruges, declaiming it the best thing to come out in that year, praising it as a black comedy that rewrote the rules. Once again, I avoided the hype train, but the love for this film has never gone away. So now, eleven years later, I finally get to see In Bruges. It’s good timing, as the original Blu-ray release from 2011 was comparatively bare bones. Now in 2019, Second Sight are giving In Bruges the Limited Edition treatment, just as they have now done with Flight of the Navigator, packing the disc with extra features, nice packaging, and print goodies as well, including the screenplay and a 50-page soft cover book. Sometimes it’s worth waiting to discover something new.

Ken and Ray are in Bruges, Belgium for two weeks. Ken’s having a good time in the picturesque mediaeval city, doing the tourist thing, taking in the culture, but Ray would much rather be anywhere else. He doesn’t show any interest until they find a late night movie shoot, starring a dwarf. But they’re not actually there on holiday. They’re a couple of hit men, and after a hit went badly, their boss Harry has sent them to lie low in the fairy tale town until the mess dies down. But they’ve brought a lot of baggage with them.

Again, I haven’t seen the original Blu-ray release to compare, but this disc from Second Sight is really quite delectable. The 2.35:1 widescreen transfer of a 2008 film is unsurprisingly hard to fault. The image is clear, detail and shadow levels are good, and colours are rich and consistent. There is a lot of detail to be had here; after all, Bruges is a fairy tale city, architecturally picturesque, atmospheric and historic. It all comes together with wonderful, naturalistic cinematography which is a joy to perceive.

Audio comes in DTS-HD MA 5.1 English form with optional English subtitles. I found the subtitles to be useful for the odd moment with incomprehensible European accents, but by and large this is a dialogue heavy film, and said dialogue is brought across with clarity. There is action towards the end of the film though, and the surrounds are put to good use to bring that across. The music really suits the story well, delicate and melancholic when needs be, and with the occasional selection of rather apt songs.

I haven’t seen the retail package, or the books, and can only comment on what’s on the check disc. It boots quickly to an animated menu.

Most of what was on the original release is repeated here.

When in Bruges lasts 13:55 and is the making of featurette, with behind the scenes looks and interviews with the cast and the crew.

There’s more of this in Strange Bruges, which lasts 7:33, but focuses more on the historic town as a location.

A Boat Trip Around Bruges lasts 5:42 and is really an infomercial on the highlights of the town, as witnessed from the canals.

New to this release are the following...

Six Shooter is the Oscar winning short film from director Martin McDonagh which lasts 28:13. It also stars Brendan Gleeson, this time as a recently bereaved widower who takes a bizarre train ride home from the hospital

You get four new interviews, with Director of Photography Eigil Bryld (21:50), Editor Jon Gregory (15:14), Production Designer Michael Carlin (13:04), and Actor Eric Godon (13:53), looking back at their respective careers, and the film in particular given 11 years of perspective.

While I certainly now wish that I had seen In Bruges earlier, there is a timelessness to the film that means that I don’t regret discovering it even now, 11 years after everyone else. It’s a delightful, black comedy crime thriller which gleefully does its own thing, and somehow succeeds in its seemingly impossible mission, bringing out the humanity in hired killers, making them sympathetic. It’s because they have their own brand of artful witlessness, a humanity and naiveté to them that they are so easy to relate to, despite the horrible things that they have done, and indeed do in the film.

It also is to the film's credit that there is a wonderful comedic vein to the story, especially in the relationship between Ken and Ray, and later on Harry as well. Ray’s new to the business, opinionated, and without a filter on his mouth, yet charmingly so. One of his opinions is a negative one about Bruges, which he insists on expounding to Ken, to the point where he’s behaving like a petulant infant. Ken on the other hand occupies the wise mentor role, who has taken Ray under his wing, and insists on opening his mind to culture and history, and refusing to be put off by his young friend’s attitude. It’s a delightful comedy pairing, that many have likened to Laurel and Hardy, although it’s not quite as slapstick or as anarchic. They’re both pretty laid back and easygoing, which stands in contrast with their employer Harry, who feels like one big ball of rage, yet with an unlikely code of honour. Harry is a working class kid made good, who prides himself on his acquired culture, but doesn’t quite have the context to back it up, so his train of thought tends to be singular and focused to the point of tedium.

You have these delightful comic interactions between the characters, and the people they encounter in the town, but then you have the story, the whole reason why Ken and Ray are in Bruges, and it adds a wholly different, dark and tragic element to the tale. Right from the beginning, you have this sense that Ray and Ken are goofing around, being silly as a distraction, and as the story unfolds, you learn just why that is. It gives a peculiar edge to the comedy, a sense that the laughter is there only as an alternative to tears, all of which makes the humour In Bruges so much more effective.

The whole film is something of an oxymoron. It’s a hard-edged, gangster crime thriller, which is silly, gentle, melancholic, romantic and heart-warming, and it’s delightfully funny at that. It shouldn’t work. People that murder for a living should not be sympathetic characters, but you wind up caring about Ray, about Ken, and even about Harry by the time the film ends. If by some strange quirk of fate, you’ve missed out on In Bruges for as long as I have, then this Limited Edition release from Second Sight is the perfect opportunity for you to discover its inexplicable charms.