DVD
Great Race, The (US)

Blu-ray
The Defiant Ones

DVD
Tammy and the Bachelor

Article
Irvine Welsh's The Magnificent Eleven hits DVD this May 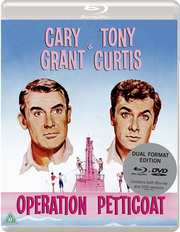 It s hijinks on the high seas when revered Lt. Cmdr. Matt T. Sherman (Grant) and the somewhat unethical Lt. JG Nicholas Holden (Curtis) team to upright the USS Sea Tiger, a flagging submarine that s seen better days. With some dubious manoeuvring (and scavenged parts), things begin to look up for the old war horse until the ship and its crew are forced out to sea by a surprise attack. Limping along and barely held together with its borrowed parts, the Sea Tiger gets some unexpected company when five stranded Army nurses are brought aboard. The game gals will prove that necessity is indeed the mother of invention, initiating a series of renovations to make life aboard the Sea Tiger liveable with the exception of the sub s accidental pink paint job. Not only is the ship now an eyesore, but a target for both the Japanese and American forces!