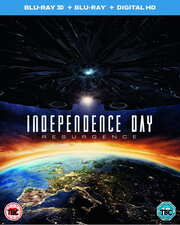 I used to be cursed by the kind of collector’s instinct that meant that I had to have everything associated with a franchise on my shelf, whether it be X-Men the Last Stand, or Beverly Hills Cop 3, or Spider-man 3, or Robocop 3. Basically, avoid three-quels! Years of wasted money on boxsets and re-releases finally educated that bad habit out of me, and I vowed to only spend my money on the actual content that I wanted to watch. I didn’t take pound shops into account when I made that promise. I remember the summer of ’96, and ID4 lighting up the box office. That was an epic action movie that redefined the genre, and consequently I’ve owned it on every format from VHS to Blu-ray, but not laser disc, or UMD, or UHD. Okay, I’ve owned it on a couple of formats. But I paid heed to the reviews of the sequel, confirmed those opinions by watching the thing on TV when it was aired, and settled down to the idea of there being only one Independence Day movie. That didn’t account for me walking into a Poundland and spotting the 3D Blu-ray on a shelf. I’m an idiot. I’m an idiot who now owns Independence Day: Resurgence. Let’s see how bad it is.

For the purposes of this review, I’m watching the 2D Blu-ray disc that comes in the case alongside the 3D one.

In 1996, the aliens came in their massive ships, and laid waste to the cities of the world. It was only through unity, ingenuity and a refusal to surrender that humanity survived. 20 years on, the world has remained united, and with the salvaged alien technology, rebuilt and rearmed, fully expecting a follow up attack. The heroes of 1996 have had mixed fortunes. Steven Hiller died testing a new hybrid fighter, former president Tom Whitmore suffered psychiatric issues following his encounter with the aliens, while Dr Brackish Okun has been in a coma ever since. But David Levinson, who decoded the alien signal and found a way to use it against them, is now the head of the Earth Space Defense Initiative, in charge of preparing for the aliens’ return.

In 2016, the world is celebrating the 20th anniversary of its salvation, when a portal opens up near the moon, yielding an alien vessel. The moon base is ready, and shoots the ship down. Only they’ve shot the wrong ship. The real enemy isn’t far behind and they are far bigger and far more powerful than anything seen in 1996. And while Earth has been preparing, so have the aliens...

We can get the basics out of the way. The 2.39:1 widescreen 1080p transfer is pixel perfect and impeccable, and they went to town with the CG aliens and spaceships. Audio is present in a thunderous DTS-HD MA 7.1 Surround English track, and you also get Dolby Digital 5.1 Surround English Audio Descriptive, Spanish, French, Turkish, Portuguese, and Ukrainian, as well as DTS 5.1 Russian with subtitles in these languages plus Lithuanian, Latvian, Korean, Icelandic, Hebrew, Estonian, Danish, Dutch, Finnish, Norwegian, Swedish, and Arabic.

This movie apparently cost $170 million. What the hell did they spend it on? It’s obvious from watching it, but the Gag Reel confirms it. Aside from a couple of scenes, the whole thing was shot against green screen, even the most innocuous and simple of scenes where you’d think it would be more cost-effective to shoot for real, can look composited in post. That coupled with the digital filmography, the absence of the kind of model work and practical effects that shone in the original film, makes the sequel look like a video game. It may be the best looking and most detailed, glitch free video game you have ever seen, but it certainly doesn’t look like a movie.

You get two discs in a BD Amaray with one on a centrally hinged panel. There is an o-card slipcover, and the disc boots to an animated menu.

The extras on the 2D disc comprise the following.

You might want to credit Will Smith for seeing the script for Independence Day Resurgence and choosing to do something else instead, only he chose Suicide Squad. The Independence Day sequel is bad, almost unwatchable. They’ve harked back to the effluent age of sequels in the seventies, where sequels were just remakes by any other name. Independence Day Resurgence is Independence Day. Sure the date has changed, the tech has changed, and there are new characters, but aliens still come to Earth, blow the crap out of the human race, the survivors come together, and find a sneaky way to fight back and win. President Whitmore even finds some time to make another rousing speech.

There is a bit of entertainment in seeing those familiar characters from the original film again, David Levinson and his eccentric father, Whitmore, Dr Okun and the like, but it’s like they’ve forgotten how to write dialogue in the last 20 years. The original Independence Day was quotable and witty, in the sequel, the dialogue feels trite and clichéd. And while the original cast might engender some nostalgia, the new generation have a uniform blandness that is dispiriting. They are insipid enough to be forgettable while you’re watching the film. Poor Captain Dylan Hiller failed to inherit any of his adoptive father’s charisma, and Patricia Whitmore had more personality as a little girl. The less said about the lesser Hemsworth the better.

Given that that the film so desperately tries to set up a franchise with these characters, and the new alien in the film, the maguffin which motivates the climax makes its failure all the more apparent. The nitpicker in me wants to complain about the lack of continuity and geography in the way the alien ship lands and the landmarks it destroys, but the film really does fail in terms of conveying scale. The size of this ship is such that it’s larger than any continent, but for it to actually make visual sense to the audience when the queen’s ship detaches and makes for Area 51; it’s as if this continent size ship has suddenly shrunk to just a few tens of miles in diameter. When things exceed a certain size, the human faculty for comprehension fails, and the filmmakers had that problem here. Let’s face it, the whole thing is a plot hole if you ascribe any rational thought to it. That should have been okay, as when I picked this film to watch last night, I wanted something that I could watch with my brain switched off, but it turns out that try as I might, I’m not dumb enough to get any real enjoyment from Independence Day Resurgence.

Watch the original Independence Day. That’s a movie! Independence Day Resurgence might look and sound fantastic on Blu-ray but it’s really just a spectacular $170 million videogame cut-scene. It’s the Jaws 4 of the Independence Day franchise. It was also made in that brief period when Hollywood was pandering to China in films to make a few extra billion dollars a year, and that is so clumsily shoe-horned in that the studio politics overpowers what little there might be of interest in the film. Avoid this drek!