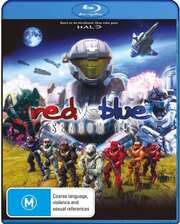 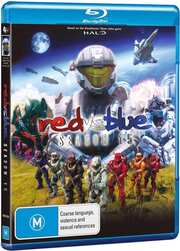 Article
Halo 4: Forward Unto Dawn is out to buy now on DVD and Blu-ray

Review for Red Vs Blue - Season 15 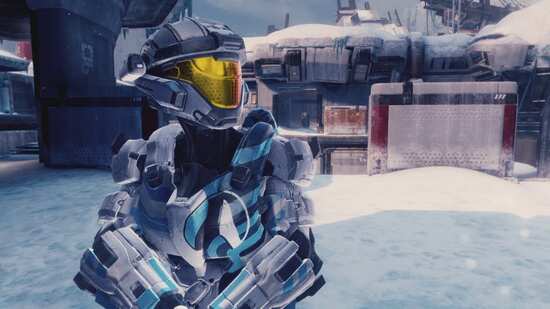 The Reds and the Blues may be heavily armed bumbling idiots, but their lengthy misadventures which began with a ludicrous training exercise in Blood Gulch led them to becoming the heroes of Chorus. But now they are heroes no more, as it seems that the Red and Blues are full on criminals, carrying out a series of violent heists and leaving a trail of corpses. 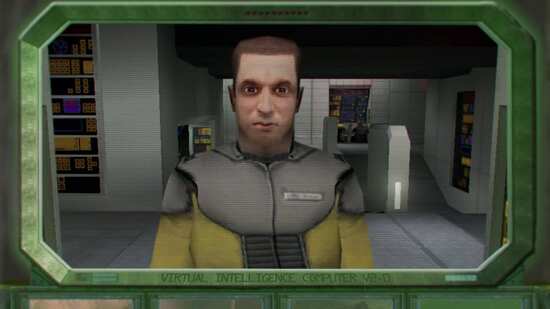 One reporter isn’t buying this. Dylan Anderson has become obsessed with the story, and has come to realise that the criminals are impersonating the Reds and Blues. With her idiot intern of a cameraman Jax, she decides to track them down, a journey that takes her from Blood Gulch to Chorus, where she gets a message to give to the heroes when she finds them. It’s a message from Church.

21 episodes of Red vs. Blue Season 15 are presented on this Blu-ray from Hanabee Entertainment, edited together as a film. 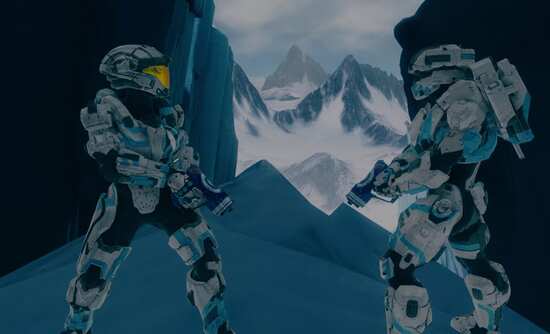 Season 14 with its departure from the norm when it came to the animation may have offered 1080p playback, but it’s back to the normal, videogame machinima for Season 15 of Red vs. Blue. That means a 1.78:1 widescreen transfer at 1080i 60Hz. Given that the footage is captured from various X-Boxes, that format is to be expected. You’re essentially looking at videogame footage here, which is as good as a console can render, so if I were still qualified, this would be where I’d be whinging about polygon counts, texture maps, draw distances and clipping and the like. Since I’m about ten years out of date for that, I’ll just say that Red vs. Blue looks pretty good, and graphical glitches are few and far between. Whether that’s a compliment to Rooster Teeth or Microsoft or Bungie, I don’t know. It’s all clear, and sharp, and watchable throughout. 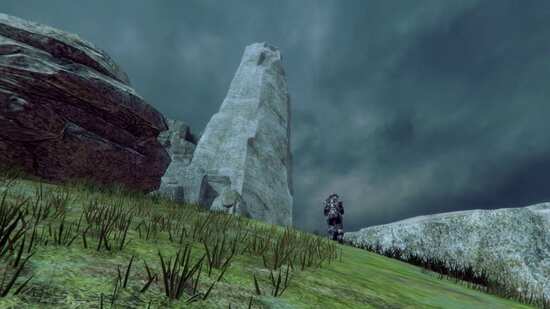 You get a Dolby Digital 5.1 Surround English track with this release, and at a measly 360-odd kbps at that. This seems to have been the standard for RvB Blu-rays from Rooster Teeth, and it’s always a disappointment given the action packed nature of the show. It’s watchable enough though. Once again English subtitles are available, and I have them on to save time with me having to skip back and check that Caboose just said what I think he said (he actually does!). 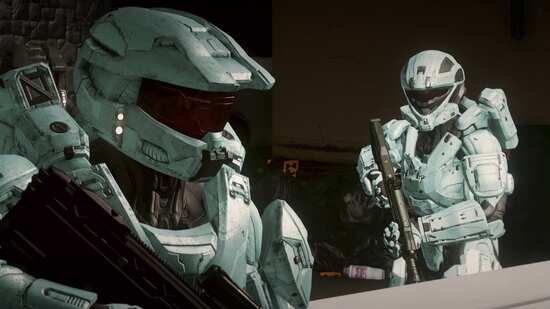 You get one disc in a BD Amaray which, after a generic Rooster Teeth trailer, boots to a lightly animated menu.

Things are pretty sparse on this disc when it comes to extra features. 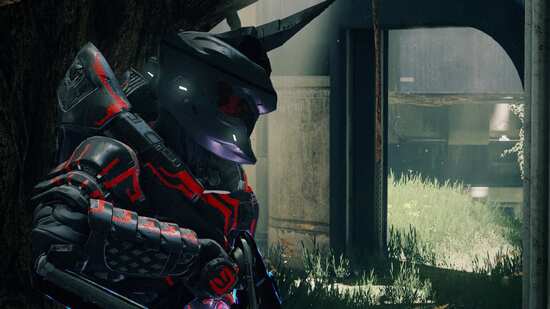 Red vs. Crew is a 51 second slideshow of photos of the people behind the show.

You get trailers for Camp Camp and RWBY. 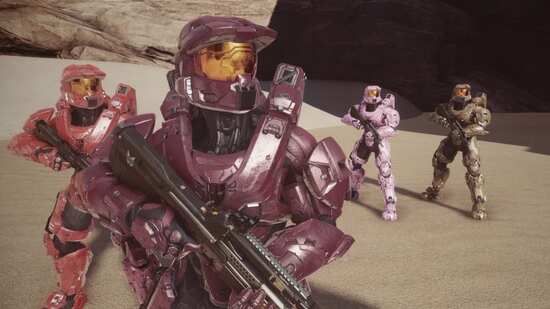 The substantial offering on this disc is the audio commentary, which is done in rotation, with the cast and crew tagging out every five episodes or so for a new batch of people in the booth. 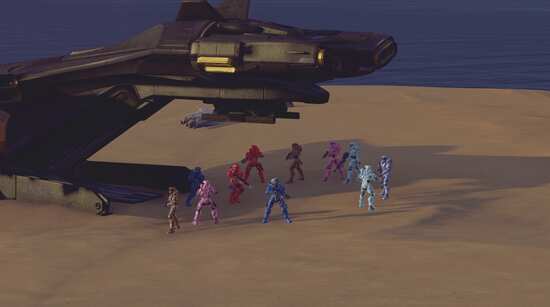 I suppose it would be lazy of me to simply say ‘more of the same’ and be done with the review, but the truth of the matter is that the Red vs. Blue franchise is stuck in that weird contradiction where the creators keep on pushing the envelope in terms of visuals and story, but really only to deliver the same kind of comforting comedy and characters that fans are familiar with. You can change a little, but not too much. Changing too much is exactly what happened with Season 14, the anthology season, where the creators were freed to do anything they could dream of with the franchise, including ditching the video game that inspired the series altogether. That was a big risk to take, and they managed to pull it off, but for Season 15, they pull out the X-Boxes and load up the most recent Halo release and get back to normality. 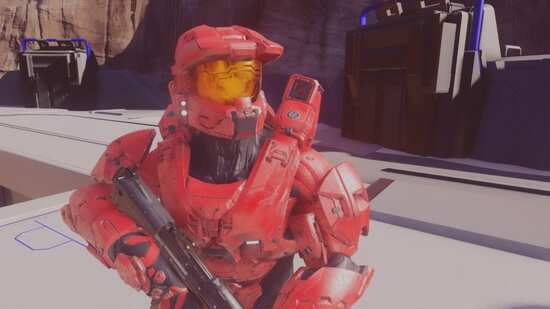 Fifteen seasons in, and they’re still developing the Sim Troopers and the Freelancers plot lines that began so long ago, and you might have thought, given the Chorus trilogy that they would have left that story behind by now. But there are always new furrows to plough. Season 15 posits that there were Reds and Blues simulations all over the galaxy (something we’ve seen on previous occasions) all for the benefit of training those Freelancers, and one group of Sim Troopers, in this series called the Blues and Reds, have flipped, tired of being used and abused, and have plotted their revenge. They take on the personas of the familiar Reds and Blues, and start committing crimes across the galaxy to draw them out. Of course the heroes are too stupid and self-absorbed to rise to the bait. 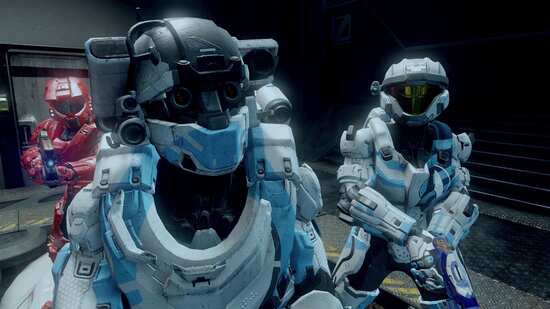 It falls to an investigative reporter to get the ball rolling when she goes looking for the heroes of Chorus, ostensibly to clear their names, or at least find out the truth. It’s a nice way to ease new viewers into the story, as she begins by looking into the past of the Reds and Blues, necessitating a recap of sorts of the first 13 seasons. She has her own issues to deal with, including a cameraman who is a wannabe movie director. Of course once she finds the Red and Blues, it’s a case of normal service resuming, as the plot takes a back seat to whatever character shenanigans are being entertained at this point. It’s a little hard now to go into the particular idiosyncrasies of characters like Sarge, Grif, Caboose, Tucker, Donut, Simmons, Lopez and so on. It also makes it harder to explain just how funny it is when they eventually encounter the Blues and Reds, and find people who are practically their doppelgangers. 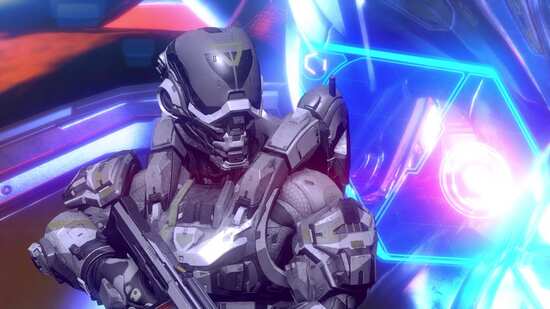 The Reds and Blues are a bunch of idiots who keep saving the day despite themselves. It’s a character comedy with a cast of the most juvenile heroes that you could imagine. Admittedly it’s a bit of an acquired taste, but it’s one that I have definitely acquired. If you’re following the series, Season 15 stands well enough alone that if you want to stop at this point, you can do so, but the following two seasons actually build on this story, and seasons 15-17 are unofficially called the Shisno trilogy. In a lunatic move, it turns out that Warners released Red vs. Blue Season 17: Singularity in the UK on Blu-ray this August, but there is as yet no sign of Season 16 on UK shop shelves let alone Season 15, which makes continuity a pain. At this point, I’m happy enough with my import copy of Season 15.