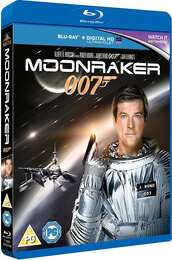 Blu-ray
The Man With the Golden Gun

Blu-ray
You Only Live Twice

DVD
Spy Who Loved Me, The: Special Edition (James Bond) (US)

Blu-ray
For Your Eyes Only
Related Articles

Moonraker was my first Bond movie, at least that I know of. Prior to that, when Bond movies were on TV, I either saw them out of the corner of my eye, playing Lego while my parents watched, or they were just on too late for my delicate years (back then violent spy movies were left till after the watershed, even if they were PG or the equivalent back in the seventies). By the time Moonraker was venturing onto British TV screens, I was a Star Wars kid, and the idea of anything space related, especially with lasers drew me like a moth to a lightsaber. Moonraker was the first Bond movie that I actually sought out to watch, and back then, with a life experience of maybe a couple hundred films, I loved it to bits.

And once more with the disclaimer about 20th Century Fox discs vanishing off shop shelves, now that Disney have stuffed the Fox catalogue into a vault. Although with Bond having gone around the houses, from UA to MGM to Sony to Fox, who knows who actually has the rights to distribute it, or when the films will get a re-release?

When a Moonraker space shuttle goes missing, and the 747 ferrying it to the UK on loan is destroyed, the responsibility for its loss falls on the UK government, and 007 is assigned to find out what actually happened. He begins with Drax Industries, and rich industrialist Hugo Drax, responsible for building the shuttles. The investigation takes Bond from California, via Venice and Rio de Janeiro, to the heart of the Amazon rain forest and into space itself, as he uncovers an insidious plan to refashion the world in Drax’s image.

Moonraker gets a 2.35:1 widescreen 1080p transfer with DTS-HD MA 5.1 Surround English, DTS 5.1 Surround French and German, and DD 5.1 Surround Czech, with subtitles in these languages and Dutch, Danish, Finnish, Norwegian, and Swedish. There are one or two moments of minor softness, but this is one of those 4k Lowry restorations, for what it’s worth, and Moonraker is decidedly watchable on Blu-ray, clear and sharp with rich consistent colours, good contrast and no signs of compression or the like. The audio too is good, the surround remix doing well by the film’s action and music without overselling the audio upgrade. John Barry is a memorable film composer, but when he does dull and ponderous he really pushes the boat out, and there are scenes in Moonraker that have my eyelids drooping almost as much as the underwater sequences in Raise the Titanic, while the theme song is that one Shirley Bassey Bond theme that no one ever remembers. The weaknesses in the visuals lie with a couple of the effects shots, and some stupid, Benny Hill camera goofery.

You get one disc in a BD Amaray case with a UV code inside. The disc boots to an animated menu.

You get two commentaries to go with the movie, two hours of anecdotes from Sir Roger Moore, and a patchwork track from director Lewis Gilbert and members of the crew.

In 007 Mission Control you get bookmarks for the film that point out notable bits to do with 007, the Women, Allies, Villains, Combat, Q and so on. Or you could just watch the movie.

The interesting stuff is in the Mission Dossier.
Inside Moonraker – An Original Documentary lasts 42:02.
The Men Behind the Mayhem – Special Effects Documentary lasts 19:01, although this latter piece covers all the Bond movies up to Goldeneye.

There is a Release Trailer in Ministry of Propaganda.

And unsurprisingly there is a photo gallery in the Image Database.

Oh dear... In my defence, at the age of six, I hadn’t seen too many films to compare with, and as my first Bond movie experience, Moonraker ticked all the boxes for a young boy looking for a fun adventure movie that never got too intense. But really, Moonraker is the first of the worst of the Roger Moore Bond movies, the start of the decline that went almost unimpeded all the way to A View to a Kill, where the franchise had become a parody of itself.

The problems are multitudinous, and it’s hard to know where to begin. The most obvious is that Moonraker is pretty much a remake of the film that preceded it, The Spy Who Loved Me; yet another megalomaniac looking to end the world so he can rule godlike over the few survivors. The medium shifts from the oceans to outer space, but that’s about the only difference. Both films even start with a parachute stunt, and while Moonraker’s is still the most adrenaline filled sequence ahead of a Bond theme song I can think of (they actually filmed it for real in freefall), it’s the iconic Union Jack parachute in The Spy Who Loved Me that everyone remembers.

This is also where the comedy elements of the franchise, ever present since the dry humour of Connery in Dr. No, really shifted to the dumb and slapstick. Clifton James certainly provided unexpected comic relief in Live and Let Die and The Man with the Golden Gun, but here we’re getting cameos from Alfie Bass, and double-taking pigeons. The gadgets too are being played more for laughs, with a gondola turning into a hovercraft leading to questions as to just why? The Bond films wanted to be cute audience pleasers more than they wanted to tell good stories at this point, one reason why a certain steel-toothed killer finds love in this film.

Moonraker is also the first Bond movie where Roger Moore looks too old to be playing the secret agent. It’s something that would dog him until he relinquished the role in A View to a Kill, but the bizarre thing is that Moore was just 51 when Moonraker was made, and Sean Connery could still sell an action movie into his sixties and seventies. It’s just that Roger Moore looked as if he belonged in a cardigan telling tales to his grandkids. It makes scenes with some of the love interests that he got in subsequent films and to a lesser extent this one a teensy bit icky. But more importantly for an action movie, there were particularly physical fight sequences that Moore just could not sell well enough to convince.

Perhaps it was a good thing then that the Bond films were heading to self-parody at this point. When you can’t take the film seriously, it matters less if the lead actor seems limited in his performance. It doesn’t help that Moonraker rehashes the previous film, but we had already gotten to the point where it was expected that the megalomaniacal villain would have a secret lair that would spectacularly explode at the end, there would be elaborate schemes to kill the hero that would be easy to escape from, and even the fact that the first woman that Bond got into bed with in a movie would die, was a cliché at this point.

There are still things that I enjoy about Moonraker. I’m enough of a sci-fi nut to appreciate the outer-space antics, no matter how unrealistic they are (the zero-g sequences just look embarrassing now). It’s also hard to remember at this point just how big a deal the space shuttle was in the late seventies. It was America’s big leap forward when it came to space exploration, and each new tidbit of news would make headlines. I still remember the test-bed Enterprise model being carted around on the back of a 747, and being separated to glide down by itself for airworthiness tests. The idea of a whole fleet of shuttles being launched simultaneously to rendezvous at a secret space station just inspired the imagination. Moonraker still gives my inner six-year-old enough of a tingle to leave a soft spot for what is really a forgettable Bond movie.

It's my favourite Bond theme 😊
posted by Mikeonfreeserve on 17/1/2021 21:56
This is my all time Mandella effect, in the scene where Dolly meets Jaws during the chairlift crash, and they fall in love at first sight because both have steel teeth, jaws with the steel teeth and Dolly with steel braces in her mouth. But..now she has no braces in the movie. WHAT unbelievable. That was the joke of the scene with them both have steel in their mouths. I remember the scene with braces, and what makes it true is steel braces were needed to make the joke so funny. Its a weird world where your past is changed or is it part of the matrix gone wrong!
posted by bandicoot on 25/1/2021 00:11