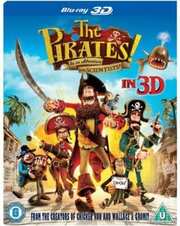 The Pirates! In an Adventure with Scientists (Blu-ray 3D) (Blu-ray Details) 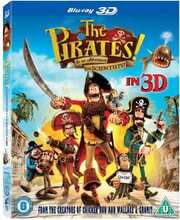 Blu-ray
That Time I Got Reincarnated as a Slime: Season One Part One

Review for The Pirates! In an Adventure with Scientists (Blu-ray 3D)

There was a brief moment back when I thought that the pirate movie genre was going to get a renaissance. Cutthroat Island might have sunk without a trace, but when the first Pirates of the Caribbean movie came out, I was just as enthralled at this audacious theme park ride adaptation as most everyone else. But then they started making sequels, and over-familiarity with the characters led to a case of diminishing critical returns (they must make money as they still keep making them), and the taint started reflecting on the first film as well. When I most recently watched it, I certainly couldn’t find that sense of wonder and fun that I had the first time. It does make me wonder if we’ll ever see a decent pirate movie again, or if my only resort will be waiting for another matinee showing of The Crimson Pirate with Burt Lancaster. If live action can’t do it, maybe animation can. It turns out that Aardman Animation turned their hands to a pirate adventure movie, and previous experience has given me the opinion that Aardman can do no wrong...

The Pirate Captain has the best ship, and the best crew, and he’s a shoe-in for the pirate of the year award. Unfortunately that’s only in his own mind, as his haul of booty is pitiful compared to bigger names like Peg-Leg Hastings, Cutlass Liz, and Black Bellamy. Ridiculed once too often, he becomes determined to beat them, and sets sail on a pillaging spree. He doesn’t have the best of luck though, finding ships with hardly any treasure to steal. Then he happens upon The Beagle, the creepiest ship yet, loaded with bits of weird animals, and with one notable passenger, Charles Darwin. But there is also a chance for great riches, when Darwin notices that The Pirate Captain’s parrot is not really a parrot at all, instead something far more rare and valuable.

Once again, I found The Pirates! In an Adventure with Scientists in a useful bargain bucket. Only the 3D disc was available, but as it has the 2D version as well, I wasn’t going to turn my nose up at the price. It does lack a couple of the extra features of the standalone 2D disc though.

When you play the film, you have the choice of the 3D or 2D versions, although the former will only play on compatible equipment. The 2D presentation is 2.35:1 widescreen 1080p with DTS-HD MA 5.1 Surround English and Dolby Digital 5.1 Surround English audio descriptive, with English and Hindi subtitles. The image is clear and sharp, with strong and consistent colours, and excellent detail. The audio too is fine, nice and immersive, bringing the action across well, with plenty of pop music to drive it. The dialogue is clear throughout, so you don’t miss any of the jokes. You may miss most of the visual funnies, and this film fills every frame with references and sight gags, and offers plenty of reasons to re-watch it. The animation is smooth, and contrary to my cynical expectations, is accomplished the old fashioned stop-motion way, with puppets and meticulous animators. CGI is left for the backgrounds and the odd special effect.

You get one disc in a BD Amaray, with a UV code within. The disc autoplays trailers for Hotel Transylvania, Arthur Christmas, The Smurfs, and Cloudy With a Chance of Meatballs before booting to an animated menu.

On the disc you’ll find a commentary for the film from director Peter Lord, co-director Jeff Newitt, and editor Justin Krish.

For the kids, there is the Pirate Disguise Dress Up Game which is a bit of fun.

From Stop To Motion is a 20:52 making of featurette.
Creating the Bath Chase Sequence looks at a key scene from the film for 8:22.

Finally, the Previews repeat the trailers that autoplay.

Just as you shouldn’t judge a book by the cover, developing expectations from a movie based on the title isn’t advisable. I was expecting something from The Pirates! – In An Adventure With Scientists that the film in the end didn’t deliver, and the time I spent resetting my preconceptions could and should have been spent enjoying the film that Aardman did make. There’s really only one scientist, Charles Darwin that the pirates of the title interact with, which makes the pluralisation a little hopeful, and as the big adventure takes place in Victorian London and not on the high seas, you can see why I was expecting something completely different. But if you’ve seen any of the Aardman movies like Chicken Run or Wallace and Gromit, then you’ll adore The Pirates, with its equally idiosyncratic characters, and pure love of visual comedy. Every frame is a joy, and you’ll be watching it again and again, to pick up all those jokes that you missed the first, second and third times.

Everyone loves an underdog, and despite their delusions of glory, Pirate Captain and his crew (their names are also their descriptive) are definitely on the lower rung of the pirate ladder. His pride demands that he be recognised as Pirate of the Year, a competition decided by the amount of treasure pirated, but he and his crew don’t have the best luck raiding ships. It’s only when he tries to loot a scientific research vessel that he sees a chance to make some serious booty. He’s just attacked Charles Darwin’s ship and while gold and jewels aren’t in plenty onboard, Charles Darwin recognises that the parrot on Pirate Captain’s shoulder is no parrot at all. Against all logic, the bird is actually a dodo, still alive over a hundred years after dodos went extinct.

Presenting a dodo at the Royal Academy is a guarantee of fame and riches, and that’s one way that Pirate Captain could become the Pirate of the Year. One problem is that the Royal Academy is in London, and London isn’t exactly welcoming to pirates, especially as Queen Victoria hates pirates with a passion. But she does like rare animals. The second problem is that young Charles Darwin wants a bit of fame and fortune himself, and will be happy to take the dodo off Pirate Captain’s hands for the presentation, whether he wants it or not.

The Pirates really does entertain with the vivid and colourful characters, some really delightful writing, and tons of silly jokes. Darwin’s butler is a particular delight. The Aardman crew create an anachronistic Victorian world that has more than a few touches of steampunk, keeps enough in the way of history to feel, if not educational, then at least inspirational. Charles Darwin probably didn’t nurse a crush on Queen Victoria... After being disappointed by not getting the film I expected, I wound up enjoying The Pirates! – In An Adventure With Scientists a whole lot. It’s that family film that the whole family can indeed enjoy, and even on this 3D disc, the 2D version is presented to stunning effect.