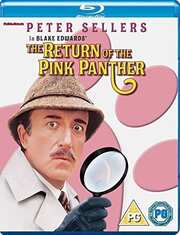 The Return Of The Pink Panther (Blu-ray Details)

DVD
The Return Of The Pink Panther

Article
It's Garry Shandling's Show out on DVD in March

Article
Alice's Adventures in Wonderland re-released on DVD this March

Review for The Return Of The Pink Panther

The fabulous Pink Panther diamond has been stolen again, this time from the ultra-secure Lugash museum. The authorities in Lugash want the man who recovered it the first time to be on the case, but Inspector Clouseau is currently pounding the beat in Paris, where he’s debating the finer points of the law with a beggar and his ‘minkey’, while a bank is being robbed behind him. It’s just the sort of development that Chief Inspector Dreyfus needs to suspend Clouseau without pay, except that he has to reinstate Clouseau as a full inspector instead and send him to Lugash.

One look at the crime scene is all that Clouseau needs to be certain that the notorious Phantom is up to his old tricks. Except Sir Charles Litton has been happily retired in Nice for the last 4 years, enjoying the Riviera with his wife Claudine. Litton knows that he is being framed, and that while the French police will be busy looking for evidence to convict him, the real thief will be getting away scot-free. It will be up to him to prove his innocence. Meanwhile Clouseau has turned his attention to Claudine Litton, as a way to get to her husband. And with every new report that Dreyfus receives on Clouseau’s activities, it drives him further up the wall. As he says, ‘Compared to Clouseau, Attila the Hun was a Red Cross Volunteer!’

The Return of the Pink Panther gets a 2.35:1 widescreen 1080p transfer with DTS-HD MA 2.0 mono English. There are no subtitles with this release, so you might want to look up the original Universal Region 2 DVD (not the Fabulous Films re-release) for those. It looks like a simple transfer from a film source with little in the way of intervention. The image is clear and sharp throughout, and detail levels in brighter scenes are excellent. Some of the Middle Eastern locations and sets really do benefit from this. Grain is present and unfiltered, varying from scene to scene, and there is the odd sign of age and print damage. But there is a bit of black crush, and more prevalent a degree of blown whites, while reds can be a little pushed. It’s definitely a film that requires a re-master. The audio is fine, the dialogue is clear, and the Mancini music comes across brilliantly. The action too is presented well, with no distortion.

You get one disc in a BD Amaray case, and there is some nice inner sleeve art. The disc boots to an animated menu where you can play the film or select from any of the 12 chapters.

There is an audio commentary and over an hour of extra features... on the US release of the film from Shout Factory, but that is locked to Region A.

This Fabulous Films Blu-ray has nothing.

The Return of the Pink Panther is very nearly my favourite of the Panther movies. It actually edges A Shot in the Dark for pure comedy value, but isn’t quite as strong in terms of characterisation and story. If you were looking for a mindless comedy to test you for bladder weakness, I’d go for this film every time. It’s true that all those things that eventually grew to annoy me about the Panther movies, Clouseau’s exaggerated accent, and the indulgence in his penchant for disguise, are all present here, but they do not at this point bury the character, and aren’t allowed to overwhelm the story. The accent works because of the reactions of the other characters, particularly Dreyfus, for whom it’s just another reason to hate his perennial bugbear. The disguises are all there for a point, trying to fool Claudine, however pathetic the disguises look. And beneath it all, he’s still the same arrogant, self-assured, bumbling idiot that he has always been, showing occasional hints of competence.

Why I love this film is because it isn’t all about Clouseau. It’s very much an ensemble piece, and there is a goodly amount of drama to balance the comedy, and in turn make it stronger. We have the Clouseau antics as usual, the sparring with Cato, the slow burn of Chief Inspector Dreyfus (he’s apparently been demoted since the previous film) hastening his descent into murderous insanity, and of course Clouseau’s cack-handed investigation of Claudine Litton. It’s all mirthful fun, although there has been something of a shift from the blend of cerebral and slapstick in the previous film, to something more slapstick here.

But it’s Christopher Plummer as Sir Charles Litton who provides the balance, and does so by reinventing the character. Niven’s Lytton was something more of an elegant dandy, a gentleman thief. Plummer gives him a mystique, a hint of danger, and a thread of darkness. He’s still elegant and refined, but there is a suggestion of a thug beneath the veneer that makes the character interesting. Also, his search for the true culprit of the crime takes him into more dramatic territory, his journey to Lugash is tinged with peril, and the people he encounters aren’t the cuddly, comic characters that Clouseau usually deals with. That’s with the exception of Pepi played by Graham Stark (Hercule in A Shot in the Dark), who is there as a target for Litton’s search for the truth, and ensures that the darkness never overwhelms the comedy.

The Return of the Pink Panther sees the Blake Edwards, Peter Sellers combination firing on all cylinders, with Sellers at the peak of his powers, and Edwards’ direction sharp, edgy and entertaining. I still prefer A Shot in the Dark for retaining some subtlety and nuance in the Clouseau character, but this film is definitely preferable if you just want an entertaining comic romp, made all the more effective as it gets the balance between comedy and drama just right.

We’re in that annoying situation where once again, the Blu-ray is better than the DVD to watch and listen to, but that’s a comparative statement. The Return of the Pink Panther could and should look much better on Blu-ray, and the complete lack of extra features is disappointing to say the least. I’m just happy to have my most loved Pink Panther movie in high definition.