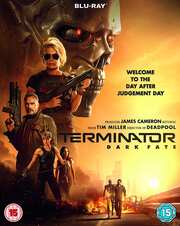 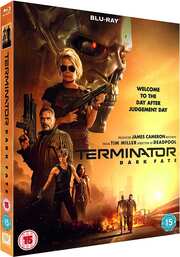 Brewster’s Millions has been remade at least seven times, which is an odd way to start off a Terminator review, but the point I’m trying to make is that cinema isn’t averse to telling, and retelling the same story on film. When you look at the franchise, all but one of the Terminator movies is about an unstoppable machine travelling back to the past to kill someone, and with a freedom fighter/good machine coming back to protect that person. It’s not a question of whether the world needs another Terminator movie, but whether this one can add enough that is new to satisfy Terminator fans.

It didn’t get the best of reviews at the time it was released, but there’s always a danger of franchise fatigue with these things. What’s important is that James Cameron was returning to Terminator for the first time since T2 Judgment Day, serving as executive producer and scriptwriter, while Deadpool’s Tim Miller took over the directorial reins. Linda Hamilton returns as Sarah Connor, along with Arnold Schwarzenegger, and more importantly, this film erases everything from T3 to Genisys from the canon, serving as a direct sequel to T2. With that in mind, it should have the desired tone, right?

A new type of Terminator, a REV-9, practically two Terminators in one, liquid metal on a metal endoskeleton, has travelled to the past to kill Dani Ramos, a non-descript girl living in Mexico City. But to protect her, the resistance has sent a technologically augmented freedom fighter named Grace. As the REV-9 cuts a swathe through the city, they get unexpected help from Sarah Connor, who has been expecting them both. She thought she and John had averted Judgement Day decades previously, but it turns out that they had only delayed it. The terms and the details change, but it seems to be humanity’s destiny to create an AI that runs out of control and turns on its creators. Sarah has been hunting and killing Terminators that have kept showing up in the past, thanks to an unknown Good Samaritan pointing her to where and when each robot will arrive. But against, the REV-9, they’ll need all the help they can get.

Terminator Dark Fate gets a 2.35:1 widescreen 1080p transfer with the choice between DTS-HD MA 7.1 Surround English, Dolby Digital 5.1 Surround English Audio Descriptive, DTS 5.1 Surround French, German, and Italian, with subtitles in these languages and Danish, Dutch, Finnish, Norwegian and Swedish. There are no problems with the transfer. It’s clear and sharp, with great colour and excellent detail, while the surround puts you in the middle of the action, all just as it should. I can only really complain about the creator choices. It is a CGI fest as you might expect, but all of pretty high quality. This film has the best digitally rejuvenated characters I have seen so far, but when Terminators start hopping around like grasshoppers, it can throw you out of the experience. Also, the Terminator theme doesn’t sound so iconic with Spanish guitar.

You get one disc in a BD Amaray case wrapped in an o-card slipcover. The disc boots to an animated menu. On the disc you’ll find the following extras.

Okay, we’re done. I don’t want to see another Terminator movie released to the world. That they’ve obviously run out of ideas, and simply rehash the same old chase movie concept is to be expected, but this was supposed to bring us back to the iconic feel of the first two films. James Cameron makes his first contributions to the Terminator franchise since Judgment Day, and if this is the best he can come up with, he’s been hanging out with his hyperthyroid smurfs too much. I think Dark Fate disappointed me even more than Genisys. It’s like people have forgotten how to write dialogue for one thing. There were lines in this film that made me cringe. And since Terminator 2, Arnold has always been used as comic relief in Terminator movies. “Bad to the Bone” worked in the first sequel, and it was in keeping with the story, but here we have a machine talking about the finer points of drapery.

These films won’t work without a nihilistic premise, the idea that humanity is doomed, that no matter what, the machines will take over and get all genocidal. With the time travel at the heart of the franchise, you can keep rewriting history and pushing dates; nothing has to be set in stone. With Sarah Connor having stopped Skynet in Terminator 2, a new evil machine arises further in the future, and now it’s Legion looking to kill its enemies before they even become its enemies. It makes for a new aesthetic for the machines, which manifests as the oil slick look for the shape shifting Terminator as opposed to the chrome of the T1000.

The Terminator shows up to kill Dani Ramos, and an augmented human, Grace shows up to protect her. The chase begins, with plenty of action and stunts, and along the way they are joined by Sarah Connor and the old style T800 Carl, who has been learning to be human for the last twenty-odd years, feeling remorse for his actions. Carl, the remorseful Terminator is another sign of the decay of what was once a promising franchise. There’s a bit of politics with them having to sneak across the border back into the US, being captured and sent to one of Trump’s detention facilities. It’s a bit of clumsy commentary that feels shoehorned in.

What comes across most of all is the sheer amount of money spent on this thing. It was obviously so expensive that it took Paramount and Twentieth Century Fox in concert to produce. And all of that money is up on the screen, in action sequences so intense and extreme that they simply look ludicrous now. You can’t take this seriously anymore, or at least I couldn’t.

The Blu-ray is excellent, but the film is an utter disappointment. One to avoid.