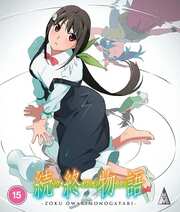 I hate it when a franchise ends, and they just refuse to put it to rest, creating more and more superfluous content that adds nothing to the story, and indeed detracts from the brilliance that the original property delivered. But enough about Star Wars... 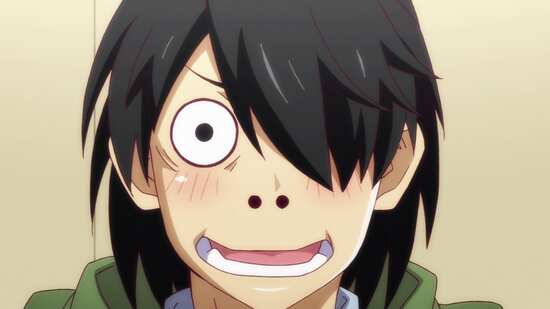 You might have thought that the Monogatari franchise, at least the high school years of protagonist Koyomi Araragi might have come to an end with last month’s release of Owarimonogatari Part 2, but it turns out that there is more story to tell. I was certainly curious as to what more there could be when the check discs for Zoku Owarimonogatari landed in my in-tray; after all, with the mystery of Ougi Oshino solved, there’s nothing left to uncover... in this reality at any rate.

The only problem that Koyomi Araragi has left is finding whether he’ll get into college. Life seems to be back to normal, or as normal as life can get for someone with a vampire living in his shadow, but Araragi lingered in front of the bathroom mirror too long. You can’t blame his curiosity when he moved and his reflection didn’t, but now he’s been sucked in through the mirror, into a world where things are flipped. Karen is now his youngest sister, not Tsukihi. Sodachi lives with their family, Ononoki is full of emotion, Mayoi’s a grown up goddess, and as for Hanekawa and Kanbaru... 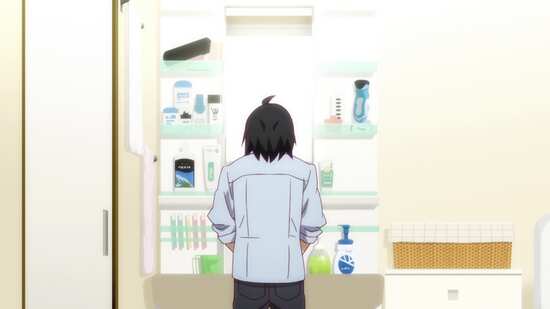 Araragi has problems, not least of which is how to get back to his world. You’d think that a vampire like Shinobu might be able to help, after all, she once got him back from an alternate timeline, but Shinobu doesn’t even exist in this mirror world. Everyone knows vampires don’t have reflections. 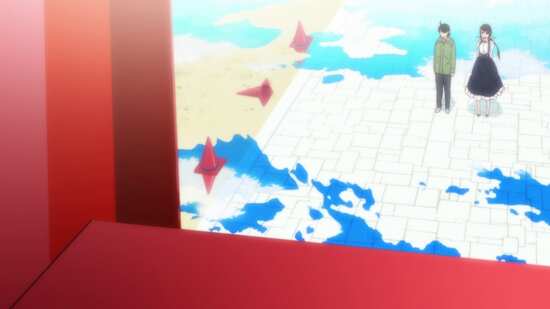 Six episodes of Zoku Owarimonogatari are presented across two Blu-ray discs from MVM. 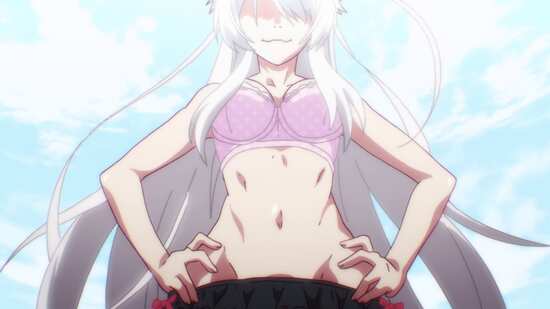 Zoku Owarimonogatari gets a 1.78:1 widescreen 1080p transfer on this Blu-ray. It’s a clear and sharp transfer, rich in detail, with smooth animation, and an absence of artefacts or obvious aliasing. There is just a smidge of digital banding in the rare scene though. It’s just the image quality you’d expect for a Studio SHAFT animation, one of the Monogatari series. Expect inventive and varied visuals, odd camera angles, lots of characters looking back over their shoulders, and of course the fan service. Also, with this being the mirror world, expect to see the familiar characters in unfamiliar guises, subtly changed or drastically so. 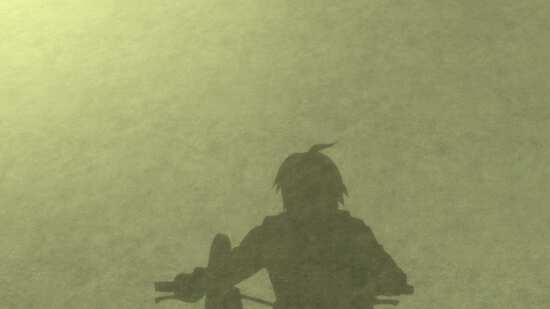 You have a simple PCM 2.0 Stereo Japanese track, with a translated subtitles and a signs track. The subtitles are removable, should you wish to take in the imagery without it being marred. There is no English dub to this title, and dubbing that intense verbiage, all those witticisms and puns would be a colossal effort. The dialogue is clear throughout, and the stereo gives a little space for the music and action. The music too is pretty effective; I certainly appreciate the theme songs. Once again all the on screen text is translated, and you’ll spend a fair bit of time manning your pause button to get everything read. 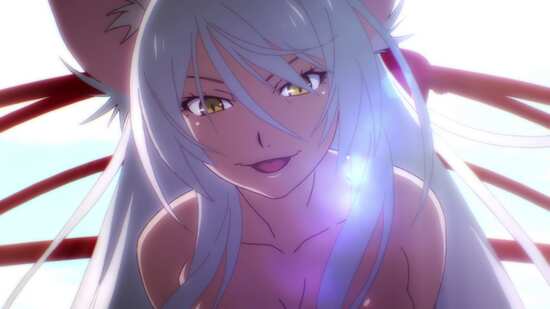 These look to be the Aniplex discs localised for the UK. The discs autoplay the episodes on insertion, and you can escape to the main menu or use a pop-up menu.

Disc 1 has the textless credits, one of each. 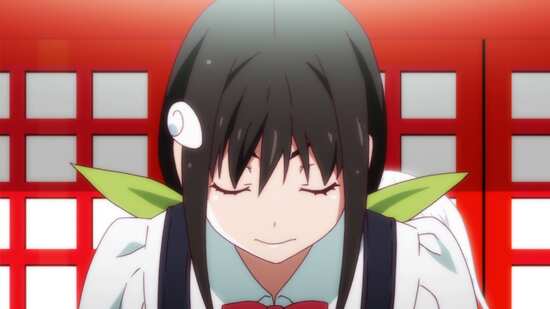 Koyomi Araragi’s high school years come to an end with a whimper, not a bang, in this wholly self-indulgent short series. The whole point of the exercise is to lead Araragi to a moment of self-realisation, and there’s nothing else to it. There’s certainly no advancement in the story, and obviously no character development for anyone else in the franchise. 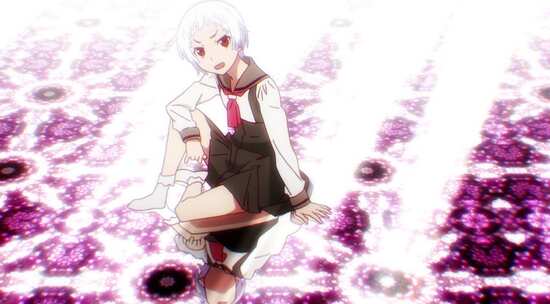 Zoku Owarimonogatari is in many ways a retrospective of the whole series, albeit a retrospective seen in a mirror, in a world where the characters turned left instead of right. Araragi has a ‘moment’ in front of the bathroom mirror, and gets pulled into an alternate reality, where he has to figure out the nature of his new world, why he’s there, and how to get back.

As a result we get to see familiar characters in unfamiliar guises, apparently in a world where Koyomi Araragi never encountered the vampire Kiss-Shot Acerola-Orion Heart-Under-Blade, and never got drawn into the world of the supernatural, and apparitions. This is a world where his sister Tsukihi is subtly changed, Karen more so. It’s another reality where Mayoi Hachikuji grew up, where Tsubasa Hanekawa embraced the cat, where Kanbaru is the Rainy Devil and so on, and where Kiss-Shot Acerola-Orion Heart-Under-Blade is human. 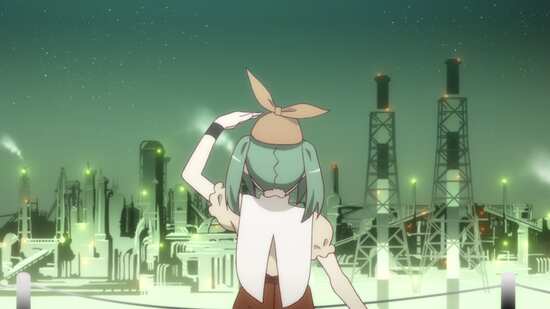 It’s certainly cool to see how this world is different from the familiar world of Monogatari, but as mentioned, Araragi has nothing to do there, no problem to solve other than that of his own. He goes from place to place, encountering all these mirror versions of his friends and acquaintances, trying to figure out just how and why they are different, and how that relates to his own situation, all with the ultimate goal of finding his way back to his own world. The ultimate solution is such a damp squib, certainly no fireworks visually, and no fireworks in terms of narrative and character, that it’s hard not to come away from the show with negative feelings towards it. You’re left with a “Was that it?” feeling, which is not what you want from the final, to date, part of Monogatari. 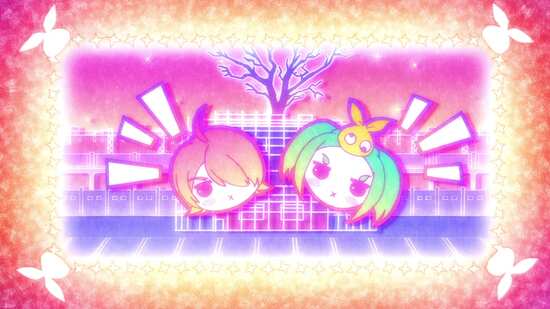 Still, you do get the quirky characters, this time in their mirror guise, you still get that iconic animation style, you get the dense verbiage and character interplay, and you get that Monogatari fan service. The toothbrush scene gets a sequel here, with face washing. It’s always nice to get more Monogatari, and if you’re a fan of the franchise, you will appreciate Zoku Owarimonogatari, but I have to say that it is the weakest instalment yet, and not a great note to end this part of the franchise on.