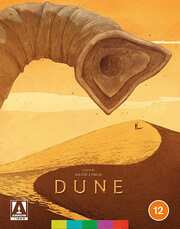 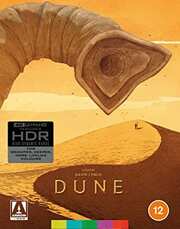 It’s just my opinion, but there’s been something of a sea-change at Arrow Video since they were bought out by The Hut Group quite recently. That independent spirit of creating content for fans, by fans has diminished somewhat to be replaced with more of a market focused mentality, which I guess is to be expected. The Dune Limited Edition is an example of that change. At the end of 2019, the old Arrow Video released The Vengeance Trilogy on Blu-ray. It was supposed to be Oldboy on Blu-ray and UHD given a new 4k restoration, but at the last minute, a third documentary disc was dropped for licensing issues. So Arrow went back, got the rights to Sympathy for Mr Vengeance and Lady Vengeance, and turned the whole thing into a Blu-ray trilogy release, keeping a separate UHD for Oldboy as well. That was for the fans.

This year, with a new Dune movie coming out, and with Koch Media in Germany giving the original Dune a new 4k restoration for UHD and BD release, Arrow got behind it as well. They envisaged a Limited Edition release, with the movie in either UHD or BD, and an extras disc, with an all new feature length making of documentary, a sixty page book and other physical goodies. The Deluxe Edition would have both UHD and BD, and another 100-page book. Rights issues with Universal meant that we would only get the Theatrical Cut. Then at the last minute, there were issues with the new documentary, and rather than wait as Arrow might have done previously, they just dropped it to stick to the original release date. Meanwhile, Germany’s Koch Media has a 7-disc Ultimate Edition coming, which took on the delay to keep the new documentary, has more in the way of extras, and has two other versions of the film, presumably the Alan Smithee TV Version and the Spicediver fan edit. It’s a release exclusive to Germany (there are three disc releases with the documentary that you can import), but I was indignant enough to pull out my wallet and find some kind of import service... Then I remembered. This is David Lynch’s Dune; not the greatest sci-fi movie in the world.

It is a guilty pleasure of mine though, and I’ve owned it multiple times on VHS, on DVD, and a few years ago, I put in more effort than the film probably deserved to source the then best possible BD transfer from the US. That was certainly enough for me to shell out for the new Limited Edition Arrow Blu-ray, mastered from that new 4k restoration.

The scale of David Lynch’s vision is mind-boggling; he attempted to bring an epic novel, vast in scope and complexity to the screen. The story was condensed to two and a quarter hours, bringing the epic vistas of four worlds onto the screen. Having read the book, the fact that they failed isn’t surprising; the fact that they even made the attempt is astounding. You won’t be surprised when I decline to summarise the story. Suffice it to say that this is a complex tale of politics, eugenics, and war. Two rival houses, the Harkonnens and the Atreides battle for control of the planet Arrakis, both sides manipulated by the Imperial court of Shaddam IV and the Spacing Guild. While this occurs, the Bene Gesserit sisterhood is trying to breed a messiah, the Kwizatz Haderach, by manipulating the bloodlines of both rival houses. On Arrakis, the Fremen are fighting for their freedom and await the fulfilment of prophecy, the arrival of the messiah who will lead them to victory.

Dune gets a 2.35:1 widescreen 1080p transfer from Koch’s 4k restoration. Audio comes in DTS-HD MA 5.1 Surround and 2.0 Stereo English with optional subtitles. The surround is really nice and immersive, without feeling overly designed, but if even that is too much for you, the inclusion of the original theatrical stereo audio will be ideal. The music is a big part of the experience, and comes across well here, but I haven’t heard the audio as well balanced in Dune before as on this release. For once, all of the dialogue is clear, including all the interior monologues.

The image is astounding, the best I have ever seen Dune. The 4k restoration has done wonders for the clarity; the film has excellent detail, making the most of the wonderful set design and costume design. Dune is properly filmic, with a nice level of grain, although never too obtrusive. The contrast is spot on, and black levels are excellent. The film finally looks naturalistic when it comes to skin tones, and the production design of a tired retro lived in universe comes across as never before. Damage and signs of age have been eliminated; although one or two scenes might have an odd tint at the edge of a frame (they were completely faded on previous releases). But that is the one flaw in an otherwise impeccable release. No doubt the UHD with HDR is even better.

You get 2 discs in a BD Amaray case, one on a centrally hinged panel. The sleeve is reversible, with the original art and the new art. There are six lobby cards reproduced and in the case. The Amaray slips inside a thick artcase. There’s also room for the removable blurb sheet. There is a 2-sided fold-out poster, again with the old and new art.

You’ll also find a 60-page booklet in the case with plenty of stills and artwork, and more importantly there are five essays on the film, with three new pieces from Andrew Nette, Christian McCrea, and Charlie Brigden, and two vintage pieces from Ric Gentry (1984), and Chris Rodley (1997). There are also a few pages of Dune Terminology.

The discs boot to animated menus, and many of the extras will be familiar if you’ve owned the old Sanctuary DVD release, or that US Universal Blu-ray.

From the DVD you’ll recognise...

The following were also on the Universal US BD.

There are also 2 Theatrical Trailers, the US TV Spots and a VHS Promo.

In the Image Galleries you’ll find slideshows for Production, Behind the Scenes, Cast, Production Design, and Promo Art.

New for this release are the two audio commentaries, one with Paul M. Sammon who recounts his time working on the film, and something a little more critical from Projection Booth Podcast host Mike White.

Disc 2 has material I have never seen before, including mostly newly created content.

While there is a fair bit on this second disc, you can see that were it a dual layer disc, there would be a whole lot of room left for that new documentary.

Dune is an awful film. Its lead character is miscast, the pacing is disjointed, glacial for the first hour, then a highlights package for the second, the narrative is muddled and barely makes sense of the story that it adapts, made all the worse by having to rely on characters’ inner monologue to narrate the story. It just doesn’t work. All of which begs the question as to why I keep on buying it?

The answer is that it is a sci-fi epic. While you may be stuck trying to unravel its story, fail to engage with the characters, and gnash your teeth at the plethora of missed opportunities, you will still be transported away to another time and place by the sheer visual magnitude of the thing. In terms of scale, of cast, of sets, of locations it’s a feast for the eyes. And on this Arrow Blu-ray, with the benefit of that 4k restoration you are seeing this film as good as it can get on this format. Your brain may rail against the utter failings of the film, but your eyes will thank you for treating them to its visuals. Also, in one very fundamental way, this movie has succeeded. When I read a Dune novel now, I colour that narrative with the imagery from this film. And I also recall how the Dune computer games that I fell in love with so relied on the visual mythology created by this film. It may not tell the story of Dune all that well, but it has impeccably created the world of Dune.

At this point, just as with Terry Gilliam’s 30 year odyssey to make his Don Quixote movie, it is the making of Dune that is the more fascinating story, and in that respect this release is a missed opportunity. Sure, it gathers much of the extra content that was previously released by companies like Sanctuary and Universal, you get two new commentaries and over an hour of new content. That Scoring Dune featurette has interviews with some of the members of Toto that is well worth paying attention to. But I really do still want that feature length making of documentary, and hopefully Arrow will be able to give it a standalone release at some point. 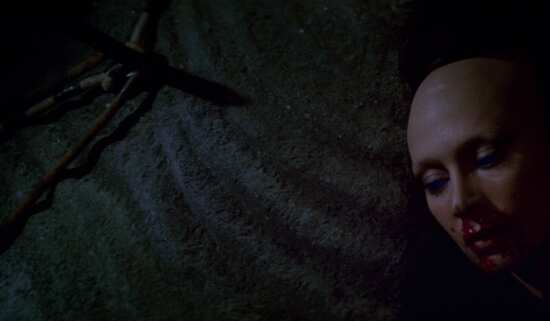 David Lynch took Frank Herbert’s seminal sci-fi novel, a dense and complex tome, and tried and failed to condense it into 2¼ hours, but it was an epic and memorable attempt. The visual dialect of the film, and the various Lynch-isms in the film have stayed with me for almost 40 years, and is the main reason I keep buying it. This year, Denis Villeneuve’s Dune will be coming to cinemas. His version will be 20 minutes longer, and apparently adapts just the first half of the book (A Dune II will probably depend on the success of this film). I fully expect the story to be a lot more comprehensible, the characters more accessible, but just as with his Blade Runner 2049, I somehow doubt that it will be anywhere near as memorable as the previous film.