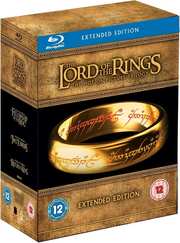 The Lord of the Rings: The Motion Picture Trilogy (Extended Edition) (Blu-ray Details) 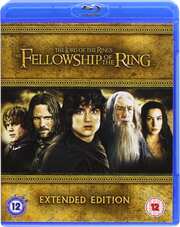 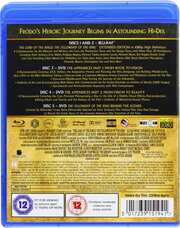 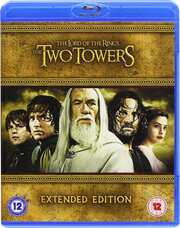 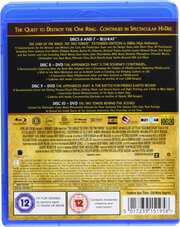 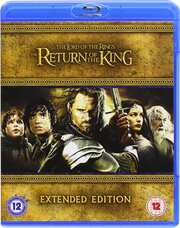 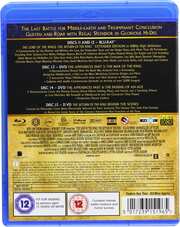 DVD
Lord Of The Rings, The: The Return Of The King (Widescreen) (US)

DVD
Lord Of The Rings, The, The Two Towers (Two Discs) (UK)

DVD
Lord Of The Rings, The: The Fellowship Of The Ring (Limited Edition 5 Disc Collector`s Box Set) (US)

DVD
Lord Of The Rings, The: The Fellowship Of The Ring (Limited Edition 4 Disc Collector`s Box Set) (UK)

DVD
Lord Of The Rings, The: The Fellowship Of The Ring Extended Version (4 Disc Set) (UK)

DVD
Lord Of The Rings, The: The Fellowship Of The Ring (Widescreen) (US)
Related Articles

Review for The Two Towers

Back to main page

The Fellowship is broken! Frodo and Sam continue alone towards Mordor... or they think they are alone. They’ve picked up a malicious stalker in the form of the previous owner of the Ring, and he wants it back. Merry and Pippin on the other hand have been captured by the Uruk-Hai and are being taken back to their master, Saruman. Aragorn, Legolas and Gimli pursue on foot to rescue their friends. But everything changes at the edge of Fangorn Forest. Merry and Pippin find themselves guests of Treebeard the Ent. The treelike Ents are intent on ignoring the outside world and the war. Aragorn and his friends encounter the riders of Rohan, and learn of trouble in the city of Edoras. King Theoden has had his will poisoned, and is ignoring the threat on his borders. For Saruman has allied with Sauron and they are intent on ending the world of men; and the first target is Rohan.

I’ve said it before and I’ll say it again. Nothing dates faster than CGI!

The Two Towers gets a 2.40:1 widescreen 1080p transfer with DTS-HD MA 6.1 Surround English and optional English SDH subtitles. The issue of the strange tint with Fellowship isn’t present here, and The Two Towers gets a presentation that isn’t too far removed from the theatrical experience, and is pretty close to the Extended DVD release, only with extra definition. The image is clear and sharp, detail levels are excellent, and the colour design is really impressive, making the most of the locations and sets, while keeping a consistent narrative tone. Some shadow detail might be a little lacking though, but it’s not too persistent an issue. And of course, New Zealand’s epic countryside is the star of the film. The audio too is nice and effective, immersive and impactful when required, while Howard Shore’s expressive score is presented with the required majesty. But the digital effects in the film haven’t dated as well as the traditional, practical and optical effects work. We’re talking about Gollum of course. In 2002 he was a remarkable creation, an effective character that blended in seamlessly into the movie. But in 2022, the seams are obvious. Gollum now feels like he’s pasted into the image, rather than existing within the frame. With Lucasfilm forever reversioning the Star Wars trilogy, you might have hoped that Peter Jackson would renew the digital effects for each new release of the LOTR films.

While with Fellowship, you had one story arc to ride along with, the adventure of the nine members of the fellowship, in the Two Towers you have three story arcs to follow. This shouldn’t be too much of an issue, but with three and a half hours of investment demanded by this film, the three arcs need to be equally as engrossing. You don’t want your heart to sink at any point when the perspective shifts and the focus falls on another story arc, taking you away from something that is more interesting. That is exactly what happens in The Two Towers, and makes it a chore to sit through.

By far the most interesting story arc in the film is that of Aragorn, Legolas and comic relief Gimli, as their pursuit of the captured Merry and Pippin is truncated when they encounter the Riders of Rohan. Their attention turns to Edoras, the Rohan capital, where the king’s mind has been tainted by Saruman’s spells, compounded by the slimy counsel of Grima Wormtongue, to the degree that he sits in utter apathy on the throne, as his nation falls prey to enemies from without. By the time the spell is broken, and the king restored to his vigour, it’s too late, and invasion is at hand. All that the people of Rohan can do is to trek to Helm’s Deep, where they can hope to mount a defence. They have no idea that they will have to face 10,000 orcs. Also, the king’s niece Eowyn becomes sweet on Aragorn, which takes care of this film’s romantic elements.

Or course there’s Frodo and Sam, whose incipient bromance is rudely torn asunder by the addition of Gollum into the mix. It’s the worst kind of love triangle, where one vertex of the triangle hates another vertex, leaving the final vertex caught between the two. They start off heading towards Mordor, and they end the film heading towards Mordor, and about all that’s interesting in this arc is the development of this warped relationship, and an interlude with Faramir of Gondor. Faramir is the younger brother of Boromir, and he has the hobbits and Gollum captive for a while, and he winds up facing the same test with the Ring of power that his brother failed. You might think from this paragraph that this arc is spinning its wheels, but it’s a dynamo of narrative continuity compared to the third arc.

Not too far into the movie, Merry and Pippin, having parted from their orc captors, encounter Treebeard and the Ents. It could have been worse, we could have had Tom Bombadil, but Treebeard is still a veritable giant of goofiness. On one hand we have the tense confrontation developing at Helm’s Deep, and then we switch to a whole bunch of talking trees (although we only ever hear Treebeard) standing around, very slowly doing absolutely nothing at all. It’s a lengthy, slow set-up to the punch-line to this gag, when the Ents finally deal with Saruman.

I may have had the patience to sit through the Ent bits the last time I watched the film, but now my feelings tend more towards resentment. Another issue with the film is the action, especially in the large scale battle scenes. There are two ways for filmmakers to approach such scenes. One is to choreograph the action so that there is some direction, and story to the battle, while the other way is to opt for chaotic mayhem, with plenty of fast cutting, shaky cam, limbs and heads flying, blades flashing, with the occasional cut to something meaningful. This is the approach with which Peter Jackson accomplishes the Helm’s Deep battle, and I find that my eyes tend to glaze over for the duration, and I tune out until the end, when I awaken to see just who survived the battle.

The Two Towers looks and sounds great in high definition, although the CGI not so much. But the film itself was a chore to sit through. At least the Fellowship of the Ring has a narrative flow to it, and character growth. The Two Towers doesn’t feel like much happens in its three hour plus runtime.

Back to main page