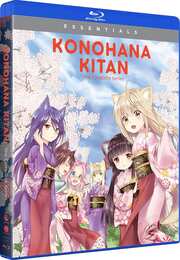 Blu-ray
How NOT To Summon A Demon Lord
Related Articles

When they aren’t making shows about vampires, or zombies or ghouls or the like, Japanese anime producers have an epic wealth of local folklore to fall back on, and you’ll have seen plenty of such weird imagery if you’ve watched anime for a while. Strange creatures like kappa, hopping umbrellas, ambulatory walls, shape-changing tanuki, and so on and so forth can make supernatural anime seem like a breath of fresh- air, if your cultural upbringing is based more on the legacy of Bram Stoker and Mary Shelley. Of course such stories don’t always need to be scary, and in a culture more attuned to the supernatural, in a land replete with small gods and prevalent shrines, you can also explore the cute and friendly side of the spooky. Anime is nothing if not willing to embrace the cute. So the shape-shifting trickster fox spirits, the kitsune, can be represented as cute girls with bushy tails and fox ears. 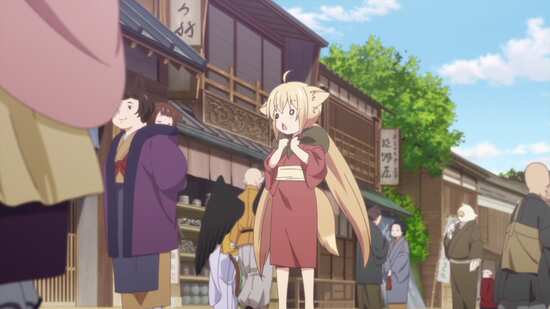 And that’s where we join Konohana Kitan, a story about a hotel on the border between the supernatural realm and the human, run by these fox girls, where a young girl named Yuzu goes to apprentice. Yuzu was raised by a human, and Konohanatei is the first place where she’ll encounter other fox girls of her own age; although Kiri, Satsuki, Natsume, Ren and Sakura’s personalities are all quite unique. But they aren’t as unique as the various guests that stay at the inn. 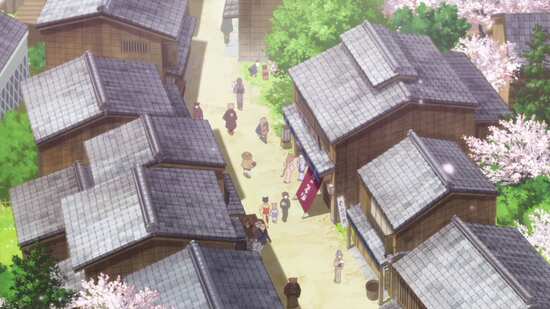 On the surface Konohana Kitan looks like a cross between Spirited Away and Hanasaku Iroha. If it’s only half as good as those two, it will still be worth watching,

Twelve episodes of Konohana Kitan are presented across two Blu-rays from Funimation. This is a US import, and hasn’t been released in the UK as yet. 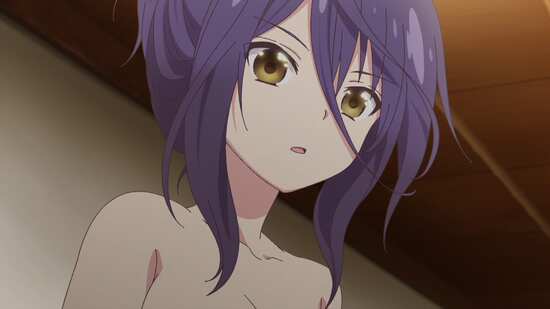 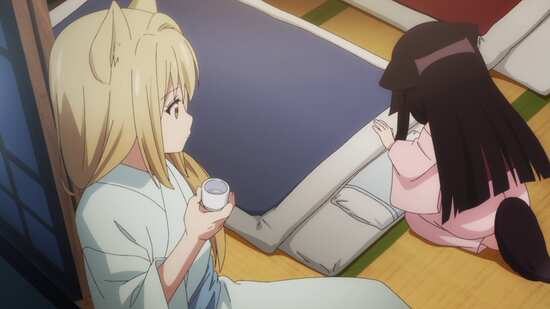 Konohana Kitan gets a 1.78:1 widescreen 1080p transfer which looks great on this release. The image is clear and sharp, very well detailed, and with consistent and rich colours. The animation is smooth, and there are no visible signs of compression, aliasing. banding or the like. The character designs are memorable and adorable with an emphasis on cuteness while the costume designs are intricate (not every anime credits a kimono adviser). The world design is nice and detailed as well, and with the panoply of supernatural beings and creatures, there is a fair Spirited Away vibe from the show. 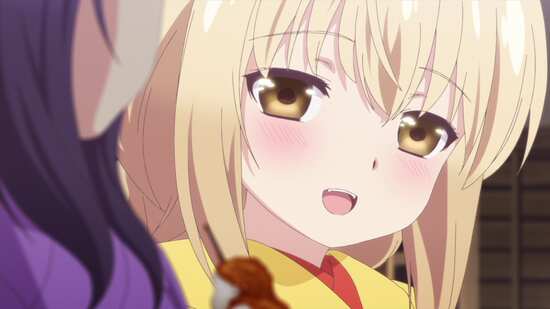 Konohana Kitan offers the choice between Dolby TrueHD 5.1 Surround English and 2.0 Stereo Japanese with optional English subtitles and a signs only track. I was happy with the Japanese audio, with the voice actors suited to their roles, the music really getting the gentle tone of the story perfectly, and with the show offering more than two theme songs to appreciate. The stereo gives the show space to breathe, while the subtitles are accurately timed and free of typos. I gave the dub a quick try, and it’s an instant miss for me, with plenty of high pitched female voices sounding bizarre in English, where as in Japanese the trope is to be expected. 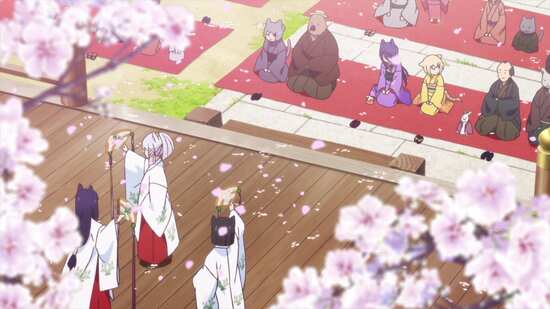 You get two discs in a thin BD Amaray style case, with one disc on each inner face. The sleeve is reversible, and there is a digital code inside. The discs boot to static menus.

Disc 1 autoplays with a trailer for Snow White with the Red Hair Season 2. 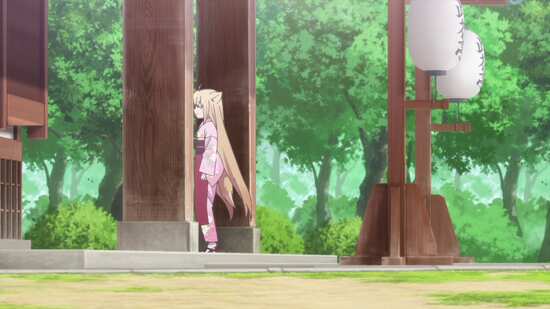 Disc 2 autoplays with a trailer for Anime-gataris.

You get the next episode previews on this disc lasting 3:07. There are two textless openings, and four textless closings, and trailers for Three Leaves, Three Colours, Hyouka, Kamisama Kiss, and The Morose Monokean. 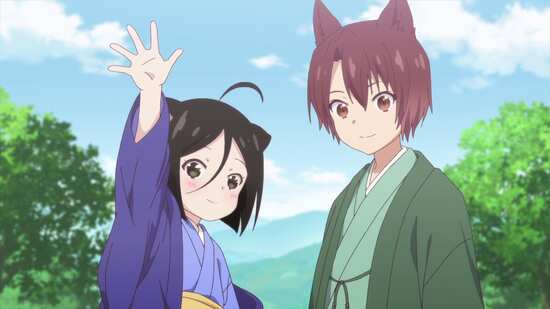 What a nice way to round off 2021. It was purely coincidental that I watched the final episode of this series on New Year’s Eve, but the overall experience of watching Konohana Kitan made for one of the better anime that I watched this year. It’s a mellow slice of life anime, with charming supernatural overtones. Sure enough, it feels like cross between Hanasaku Iroha and Spirited Away, but you can throw in a soupcon of Mushishi as well, especially in the way it explores its otherworldly stories. It has that same anthology feel to its episodes, even while it develops its cast of characters over its run. 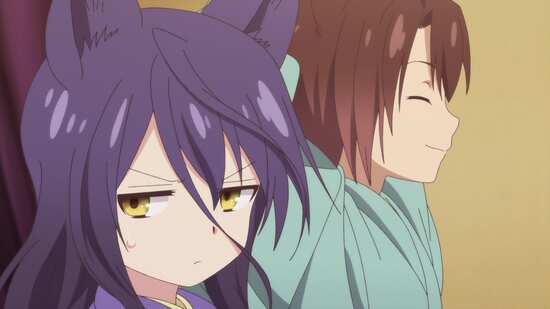 On the surface it looks like any other ensemble character comedy, where you get a group of young girls and women sharing a professional or vocational environment. You get a wide variety of character archetypes, maybe some fan service, maybe a little character conflict, and definitely a whole heap of character comedy. This time the setting is a hot springs inn, and the characters work there as attendants. The difference is that this inn is located on the border between heaven and earth, and the attendants are all supernatural fox girls, kitsune. 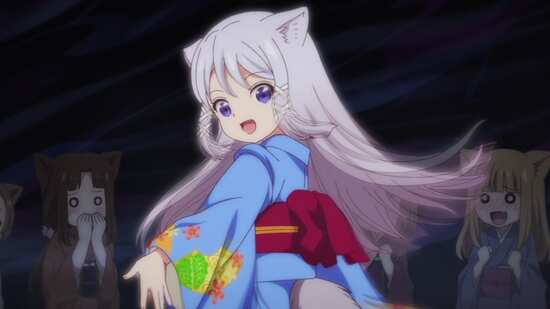 We enter this world through the eyes of Yuzu, the hard working girl who is eager to please, if a little clumsy, and is even more eager to make friends with girls her own age, having been raised in comparative isolation by a human. The inn is run by the more fox like Okami, but the attendants are managed by Kiri, wiser and more experienced, but still closer to Yuzu’s age. Yuzu is ‘apprenticed’ to Satsuki, level headed and sensible, but with issues with her big sister. Hiiragi was supposed to be the attendant at the inn, and Satsuki always wanted to be work as a shrine maiden, but their parents decided that Hiiragi had more talent in that direction. So Satsuki has a chip on her shoulder about that, and intends to leave at some point, although Yuzu quickly looks up to her as a big sister. 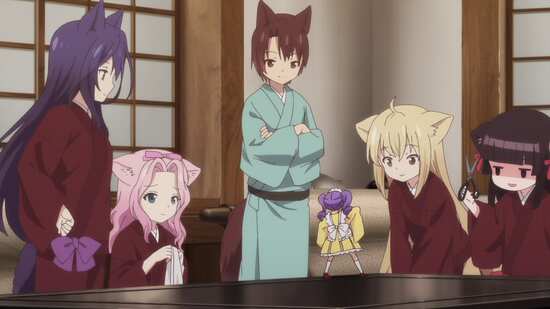 Then there is Ren, a prim and proper attendant who has a cynical inner voice, and has a thing about keeping up appearances. Her roommate is the tomboyish Natsume, and Ren nurses a secret crush on her. Natsume’s too easygoing to notice. Finally there is Sakura, the most childlike of the attendants, a quiet, mysterious girl who marches to the beat of her own drum, and is easily distracted by the opportunity to play. There’s plenty of opportunity for comedy between these characters, and given the setting is a hot springs inn, some fan service as well. Quite frankly, if that had been all there was to Konohana Kitan, it would have been a perfectly acceptable, slightly ecchi comedy anime. But that is just the surface to this show. 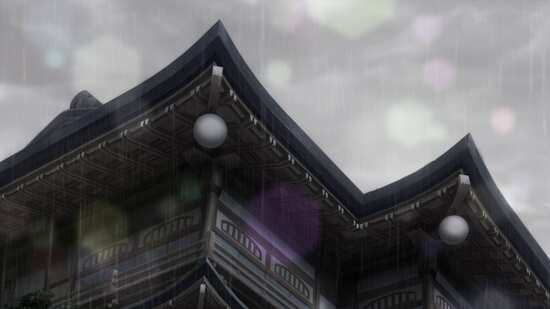 It really makes the most of its supernatural setting, and that is where this show really shines. Each week will most likely see some new guest passing through the inn, and they have some uncanny mystery associated with then, whether they are gods, spirits, or just people that wandered off the beaten path and crossed the border between realms, and they invariably have some story attached to them. In one early episode, the girls encounter a cursed doll that needs to be exorcised, only the doll starts working at the inn alongside the foxes, haughty and bossy for her diminutive size at the best of times, although terrified whenever Sakura’s around as she wants to play with the doll, and give her a haircut. Similarly when an egg appears, attached to Yuzu, they wonder whether she might be pregnant, but the egg hatches into an odd pig-rabbit mascot animal that feeds on people’s nightmares, and it too becomes a resident of sorts. 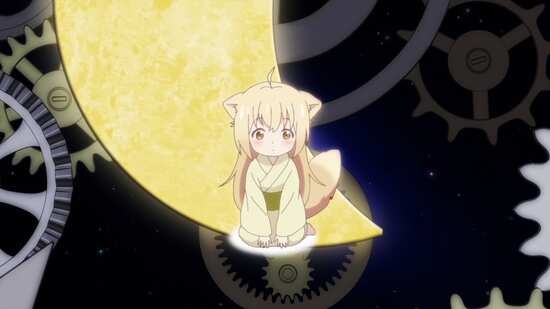 There’s an episode featuring an old woman who has long been mourning a daughter that never had the chance to have a full life, there’s an episode with a shape-shifting ghost in the hotel, wreaking havoc by taking on the form of the attendants, there’s an episode with a summer festival for the dead, an episode where Yuzu finds a girl shipwrecked on a beach, episodes where gods and goddesses visit the inn, and an episode where a rich kid and a businessman both escape their lives to the hotel. These stories tend to kick off in a comedic or exaggerated way, but tend to have really heart-warming and emotive resolutions, often surprising and in terms of storytelling really satisfying. The episodes in this series easily make the show transcend its premise. 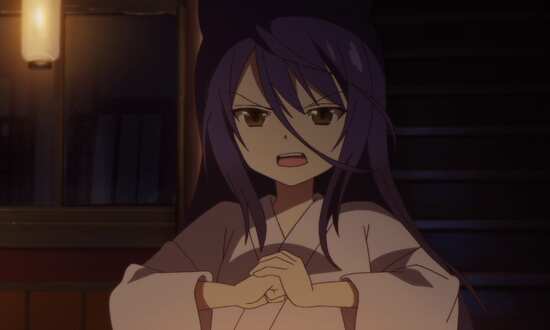 There is an ongoing character arc for Yuzu, in that her empathy for the people that she meets tends to draw her into potential trouble. It isn’t good when she shows a tendency to cross between realms, especially when she encounters spirits and gods, and all of this leads to the final episode where it seems that she’s irredeemably lost in another realm. 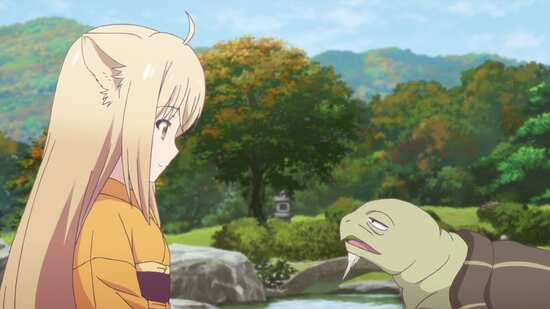 Konohana Kitan combines a cast of likeable characters with some really great storytelling to deliver a delightful anime series. It’s well worth getting, and given that it’s Region B compatible, and now out on Funimation’s budget Essentials label, it’s well worth finding a copy to import. The Blu-ray offers great presentation when it comes to audio and video (if you avoid the dub). If only Funimation UK would release shows like this.