Blu-ray
A Fistful Of Dynamite (AKA Duck, You Sucker!) 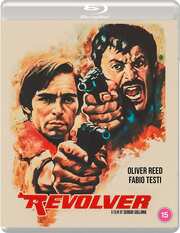 Synopsis:
After directing his triptych of political (and acclaimed) spaghetti westerns (The Big Gundown; Face to Face; and Run, Man, Run), Sergio Sollima directed two crime thrillers in the poliziotteschi genre – the name given to the violent and action-packed Italian crime thrillers that had become exceedingly popular amongst Italian audiences. Sollima was a perfect fit for this style of filmmaking, and the two films he directed in the genre are both essential viewing. Presented here is the second, Revolver, starring Oliver Reed and Fabio Testi.

Kidnappers have snatched the wife of Milan’s top prison warden (Reed) and demand the release of an inmate (Testi) as ransom. But when the warden allows his prisoner to escape, the two become trapped in a deadly conspiracy that reaches from the halls of government to the bullet-riddled city streets. Can an obsessed lawman and an escaped convict survive the forces of corruption as well as each other, or does the ultimate law of society belong to the revolver?

“Makes Death Wish look like wishful thinking!” was the immortal tagline that accompanied the film upon its US release (also retitled Blood in the Streets), but Revolver―as is to be expected from Sollima―is a much more complex film. Sollima was a highly political director and his films were often allegorical, implicitly opposed to the corruption endemic in Italian society at the time. With music by the late maestro, Ennio Morricone (including one of his most beloved compositions, Un Amico), Eureka Classics is proud to present Revolver from a new 4K restoration for the first time on Blu-ray in the UK.