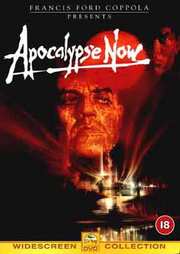 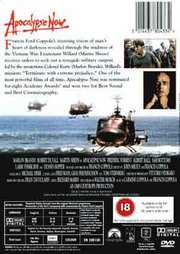 Back Cover of Apocalypse Now

Article
Extraordinary Measures out in June on DVD

Well what can I say about Apocalypse Now which hasn’t been said a million times before?
Based on Joseph Conrad’s ‘Heart of Darkness’ but rewritten for the screen by Coppola and Milius, Apocalypse Now remains one of the most influential and powerful films in cinema history.

The stunning and often disturbing story follows Charlie Sheen as Lieutenant Willard who is sent on a mission to ‘relieve’ an insane renegade colonel ‘Kurtz’ of his command with the utmost prejudice.
Set in the deep madness of the Vietnam War Apocalypse Now still remains very powerful and moving, and few films have had such a great mythos built up around them. Fraught with problems, including Martin sheen suffering from a heart attack and claimed to be disowned by Coppola shortly after shooting, its suprising it ever got finished or indeed actually turned out as well as it did. There were even rumours that some of the corpses used in the film were actually real. You really know you have something when stories like this start floating around.

Anyway, all you need to know is that none of these problems show on screen. With superb audio/visual set pieces, some real class acting and a deep involving commentary on the human condition, Apocalypse Now is a dark, involving masterpiece that has worked its way into the mass unconscious.

How many times have we seen scenes from Apocalypse Now recreated, copied and
Satirised in the media. Far too many for my liking but it does go to show how powerful an impact a good film can make. Pure cinematic history. 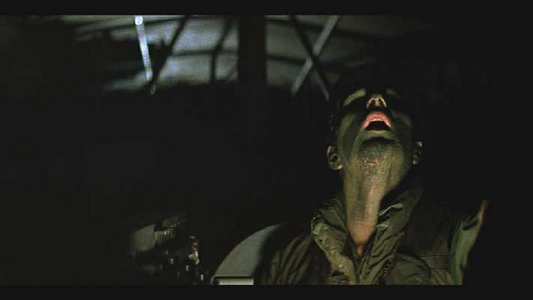 With cinematography like this you would expect a top print. Well I’m afraid it’s a bit of a mixed bag. The opening scene has large amounts of grain evident which is really disappointing, but thankfully it does clear up later on. But that’s the problem really. Some scenes are just gorgeous (just look at the Kurtz scene with Brando`s head floating around in the deep, deep blacks.) But other scenes, mostly sky shots show lots of grain. Maybe its on the original print, its just a shame the pictures not consistently good throughout.
Considering the amount of fog and mist in the film you would think the encoding would have a problem, producing smearing and other nasty artifacts, but I’m glad to say I couldn’t see anything worth worrying about. The colours (that are not subdued by the smoke that is) are nice and rich with some good foliage and flesh tones which have no bleeding whatsoever.
There are occasional flecks and scratches but nothing to worry about.

The main concern with the picture though is that it has been reframed at 2.00:1. Originally filmed at the usual 2.35.1 ratio, it does mean that the picture is slightly scanned in. Why? Cinematographer Vittana Storano has become a supporter of a universal aspect ratio and so video versions of the film are slightly cropped. To be honest it doesn’t make a huge difference, but you have to wonder what the hell he’s playing at.
Not a bad picture but some niggly problems which will disappointment the fans. 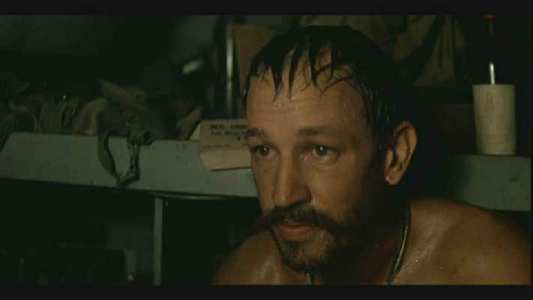 A decent 5.1 remix that makes good use of the surrounds in the action scenes, but remains mostly ambient otherwise. It does have a fairly decent soundstage which contains some nice low-end effects although more use of the sub could have been made. Dialogue remained clear throughout and altogether is a decent mix job. 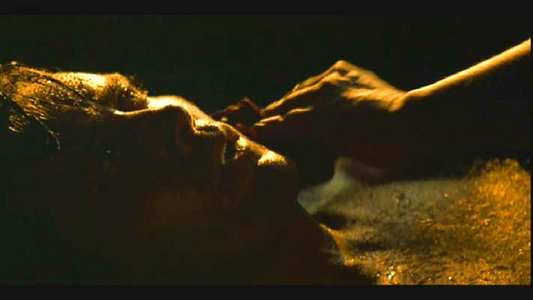 This film really needs some decent extras, which I’m afraid we don’t get even though they do exist.
We only get a theatrical trailer, some excerpts from the original theatrical programme and a short commentary on the destruction of the kurtz`s compound by Coppola. (Some versions of the film had the Kurtz scene as the credit sequence at the end of the film. This version of the film has no end credits) 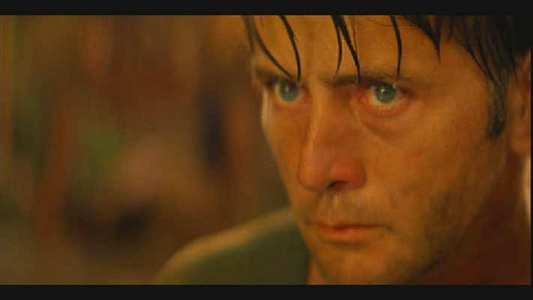 Overall a fairly decent picture quality that although with some problems is not too disappointing. But you really have to wonder why there isn’t a nice collector’s edition with all the problems fixed i.e. proper ratio, and some decent extras. This DVD therefore is more of stop gap disk, rather than an essential buy.