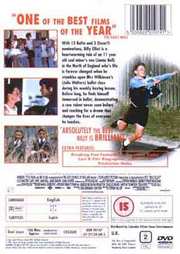 Back Cover of Billy Elliot

DVD
Gabriel And Me (UK) 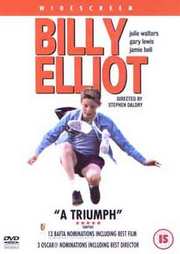 Synopsis:
This remarkable and often humorous film follows the struggles of a northern England mining town through the 1980’s strike. Eleven year old, Billy Elliot, played by newcomer Jamie Bell, is unable to get to grips with boxing and instead develops an interest in the ballet class which is taken in the next room by Mrs. Wilkinson, played by Julie Walters, (Harry Potter & The Sorcerer’s Stone, Educating Rita) When Billy’s father, played by Gary Lewis (East is East, My Name is Joe, Shallow Grave) and brother who are striking miners, discover his secret passion for dancing all hell breaks loose. They feel ashamed and ban Billy from continuing what they call a "poofs" sport.

Finally, with private tuition from his ballet teacher and a change of heart by Billy’s father, Billy manages to reach audition stage for the Royal Ballet School... But will he survive the snobbery of the Southern judges and manage to get over his own low self-esteem in time to make the cut?

A box office hit of 2000, Billy Elliot has fantastically comic moments and is a great inspiration for anyone with dancing feet!

This moving and intelligent British film has also been nominated for 3 Golden Globes, 13 BAFTAs and Oscars, including Best Supporting Actress for Julie Walters, Best Director for Stephen Daldry and Best Original Writing.