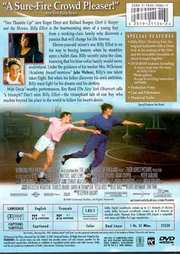 Back Cover of Billy Elliot

DVD
Before Night Falls (US)

DVD
Tailor Of Panama, The (US)

DVD
Enemy at the Gates (US)
Related Articles

Article
French drama The Round Up comes to DVD this July 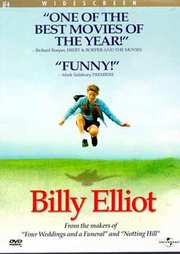 Synopsis:
This remarkable and often humorous film follows the struggles of a northern England mining town through the 1980’s strike. Eleven year old, Billy Elliot, played by newcomer Jamie Bell, is unable to get to grips with boxing and instead develops an interest in the ballet class which is taken in the next room by Mrs. Wilkinson, played by Julie Walters, (Harry Potter & The Sorcerer’s Stone, Educating Rita) When Billy’s father, played by Gary Lewis (East is East, My Name is Joe, Shallow Grave) and brother who are striking miners, discover his secret passion for dancing all hell breaks loose. They feel ashamed and ban Billy from continuing what they call a "poofs" sport.

Finally, with private tuition from his ballet teacher and a change of heart by Billy’s father, Billy manages to reach audition stage for the Royal Ballet School... But will he survive the snobbery of the Southern judges and manage to get over his own low self-esteem in time to make the cut?

A box office hit of 2000, Billy Elliot has fantastically comic moments and is a great inspiration for anyone with dancing feet!

This moving and intelligent British film has also been nominated for 3 Golden Globes, 13 BAFTAs and Oscars, including Best Supporting Actress for Julie Walters, Best Director for Stephen Daldry and Best Original Writing.

Special Features:
Interactive Menus
Scene Access
Billy Elliot: Breaking Free: An original featurette with a closer look at the making of the film and the incredible ensemble of talent brought together.
Production Notes
Cast and Filmmakers
Theatrical Trailer

Not quite the masterpiece all the media made out of it, but still - a cute and sometime emotional movie.
The plot is rather simple, still, people outside the UK (myself included) may have some difficulties with the heavy accents. Thankfully, the disk has English captions.
The video transfer is ok. While the visuals in the movie are not stunning, it is free of any compression signs. A couple of dust particles can be seen here and there, but nothing major.
The DD 5.1 soundtrack is a bit flat. Of course, this kind of a movie is not expected to be a typical 5.1 show-off movie, but still, I have found the surrounds quiet almost throughout it.
The menus are still and silent.
The extras include a behind the scenes look, some production notes and a DVD-ROM feature with more information and a photo gallery.
Bottom line - while being slightly overrated, this movie is simple, authentic and quite enjoyable.
posted by Zvi Josef on 25/8/2001 22:41
8 / 10

A simple story that tugs at your heartstrings. This would have been much more trite a story without the amazing perfomance by the actor in the leading roll and the disturbing and odd justapositions of riot police and everyday life. In the end very predictable, but a not unpleasant path to the obvious ending.
posted by linc on 24/11/2003 22:38