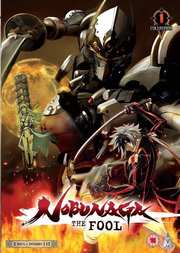 Review for Nobunaga The Fool: Part 1

Let me get this out of the way first. I watched Nobunaga the Fool when it was streamed and I didn’t like it. But it is next on my review pile, and for all the great anime that I get to watch, I need to take my fair share of pain as well. Although that might not be the case, as when I watched it streamed back in 2014, I wasn’t a fan of giant robot shows, and above all, Nobunaga the Fool is a giant robot show. Since then, I’ve fallen in love with the entirety of Patlabor, and had my Gundam virginity taken. I should be able to handle a giant robot show or two without having my brain melt, right? So this is my second dance with Nobunaga the Fool. 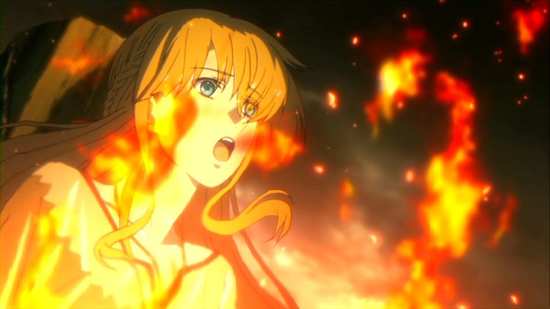 Bear with me, as this is a little involved. In the future, society is split across two worlds, the East Star and the West Star. Historical figures have been reborn into this future, and on the West Star, King Arthur is the first to unify the world and lead a renaissance. But this world has its troubles, not least a drought which is devastating crops. The eyes of the Round Table look to the heavens and the East Star. They’re not the only one, as Joan Kaguya D’Arc (Joan of Arc) is once again plagued by visions and voices, and she sees destruction for her world unless she finds the Savior King. Leonardo da Vinci shows up, with his newest creation, a Giant Armour, and with an idea where the Savior King is to be found. He offers to take Joan with him to the East Star. 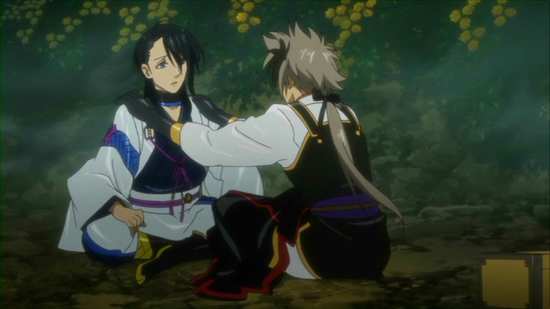 The East Star is yet to be unified. A lush and verdant world, it’s currently reliving the Warring States period, albeit with giant robots, and Nobunaga Oda is the wayward eldest son of clan lord Nobuhide, a young man with grand dreams of unifying the world under his banner, but with only his faithful vassals Akechi Mitsuhide and Toyotomi Hideyoshi at his side. Which is when a spaceship crashes into the forest, carrying a veritable genius, a blonde foreign girl with big breasts, and the baddest giant robot that Nobunaga has ever seen... 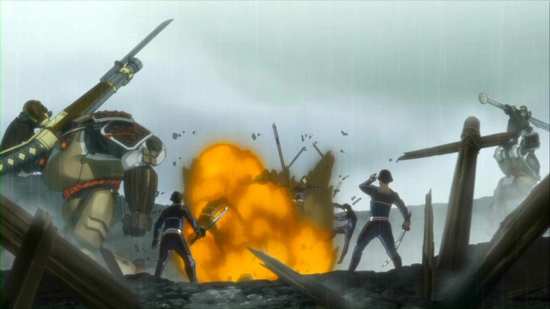 The first half of Nobunaga the Fool, 13 episodes worth is presented across three DVDs from MVM. Part 1 is also out on Blu-ray if you wish your giant robots to be in HD. 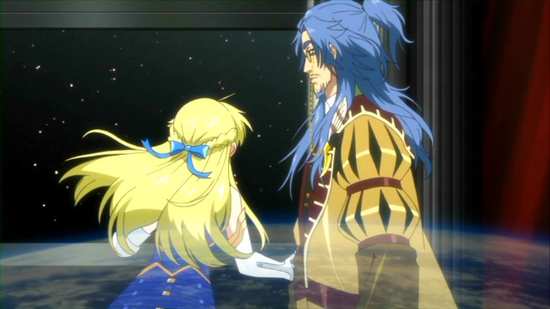 Nobunaga the Fool gets a 1.78:1 anamorphic NTSC transfer, progressively encoded on these discs. The image is clear and sharp with no visible signs of compression, and with minimal banding. I suppose that’s one of the benefits of splitting 13 episodes across three dual layer DVDs, as Sentai are apt to do these days. Nobunaga the Fool is a rather pleasant looking show, especially when it comes to the world design and the backgrounds. There’s a lot of imagination, and plenty of detail on offer, with massive planets hanging low on the horizon, city lights twinkling on their surfaces. The CG animation, and giant robot designs are well done, although oddly enough, it’s the grunt mecha, the robots of the mass infantry that show more imagination than the hero machines, which look fairly generic. The character designs also are generic, although well accomplished when it comes to costumes and detail. The failing in Nobunaga is the 2D character animation, which is an optional extra the animators failed to specify. This is one of the most static anime I have seen in ages, which given the show’s many visual positives, really does let the side down. 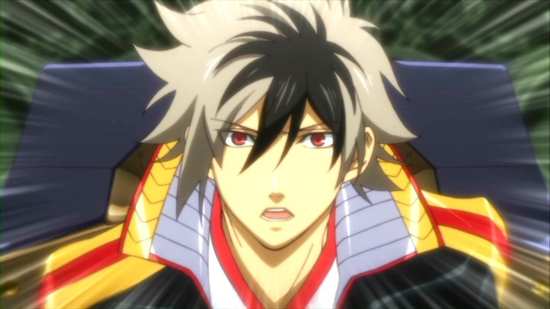 Nobunaga the Fool gets Dolby Digital 2.0 Stereo English and Japanese. You can switch the audio on the fly, but the subtitles and signs tracks are locked during playback. I really needed this to be a good English dub, but alas it’s down to Sentai’s usual standards. The voice acting is all over the place, with the actors sounding as if they are all in different shows. Some are over the top, some are flat, some are perky, some are serious, there just is no consistency of tone. The reason I needed a good English dub is that the lead actor in the Japanese audio, Mamoru Miyano kills it for me. In the Japanese, this is a show with full on testosterone male actor performances, but Nobunaga himself is so over the top that it winds up as a parody. The audio is fine otherwise, no glitches or drop-outs, the stereo doing a fine job carrying the action and the show’s music. The subtitles are timed accurately and free of typos, although Sentai’s tendency to fill the screen with production notes gets annoying in this show. 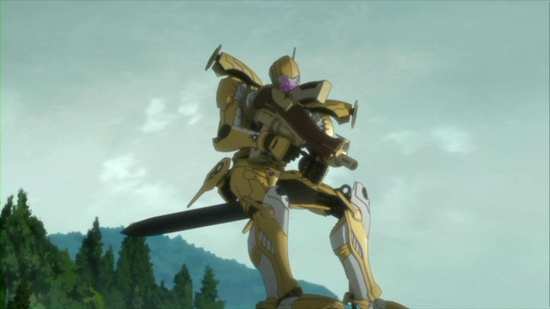 The discs present their content with static menus, jacket pictures, and each episode gets a translated English credit reel.

Disc 1 offers you textless credits, and trailers for DD Fist of the North Star, Devils and Realist, She, the Ultimate Weapon (still a letterbox transfer), and Muv-Luv Alternative Total Eclipse. 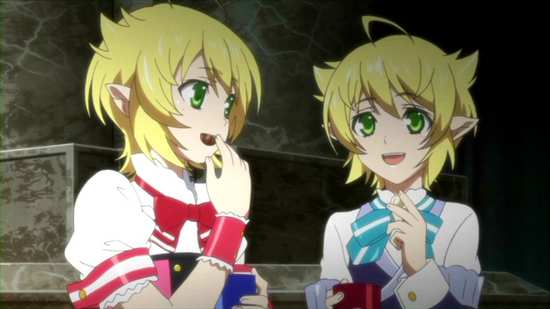 There was a heap of Nobunaga shows released the same year as this; I can think of The Ambition of Oda Nobuna, Battle Girls Time Paradox, and Nobunagun off the back of my hand. Alas I watched Nobunaga the Fool first, which put me off the whole Nobunaga fad. I didn’t get to see any more of those shows until much later, which is a shame as some of them are quite entertaining. Nobunaga the Fool isn’t. It’s not down to the giant robots, which I thought would have gotten under my skin, it’s actually the title character, who in this show is portrayed by Mamoru Miyano in full-on demented muppet mode. This is an over the top show, all manly posturing and epic displays of testosterone, as most such Warring States shows tend to be, and in voice actor performances, they go for the full Jojo’s Bizarre Adventure here, although the show’s not up to that standard. But Mamoru Miyano pushes it so far that it breaks, and so does his voice, and he goes beyond manly posturing all the way into Kermit the Frog, and that stops me taking this show at all seriously. 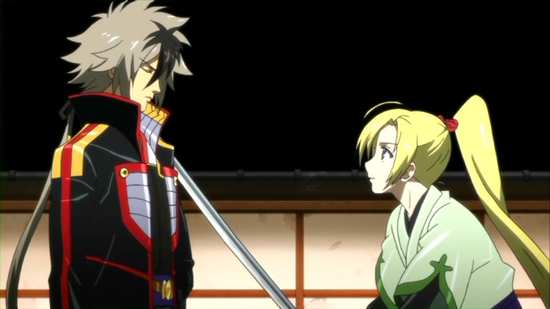 Not that this show is intended for serious contemplation in the first place. It’s a fantasy action show with a rather opaque premise. The world has either been split in two in an unspecified future or the human race has decanted to another system, where they now exist on twin worlds, the East Star and the West Star. Into this future reality, historical personages have been reincarnated. For the East Star, it’s pretty simple, as they’re reliving the Warring States period of Japan, Hence you get characters like Nobunaga, Mitsuhide Akechi, Hideyoshi Toyotomi, Takeda Shingen, Uesugi Kenshin, basically the cast of Sengoku Basara. But rather than go for the analogous historical figures for the West Star, the creators went all through history and even fiction, picking out people at random. Hence King Arthur’s Round Table is populated by people like Julius Caesar, Alexander the Great, Chandragupta Maurya, Ferdinand Magellan; it’s all over the place. 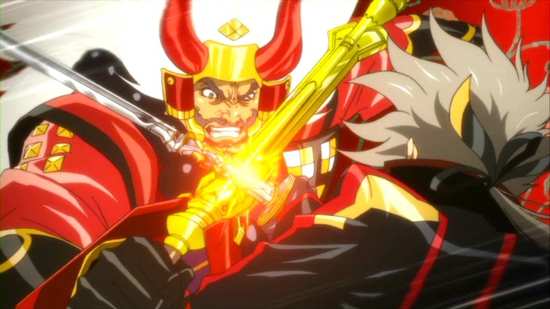 Into this world also are reborn Leonardo da Vinci and Joan of Arc, who kickstart the story when Joan has a vision of a Saviour King, and hitches an illicit ride with Leonardo to the East Star, where they believe this Saviour King will be found, who will save both their worlds. As for what all the squabbling, fighting, politicking and posturing are about, it’s about the Dragon Veins. I have no idea what the Dragon Veins are, but they talk about them a whole lot in the show, they evidently mean a lot, and if the creators ever figure out what they are, maybe we’ll get an explanation in due course. 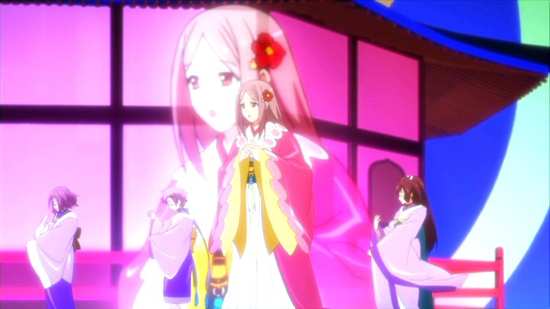 Nobunaga the Fool is pretty much a show put together by committee, the episodes are loosely structured in a way that means that Leonardo da Vinci pulls out his tarot deck once an episode, in which the episode title card will be pulled, and some arcane meaning revealed, all in the hope that some punter will shell out for the tie-in merchandising. It becomes a sign post in the narrative that can get you rolling your eyes. 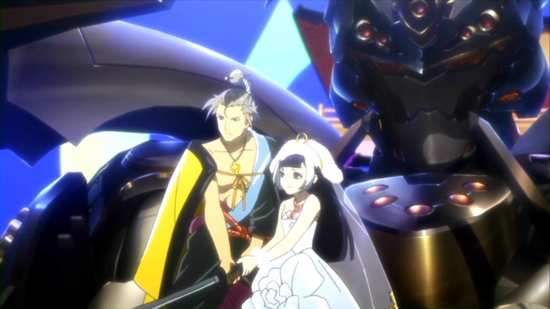 Quite frankly, I have very little idea what’s going on in this show. There’s action, there’s men talking manly, there is plenty of meek female eye-candy (a total waste of the Joan of Arc character if ever there was one), there’s politicking galore, there’s scheming, machinating, and back-stabbing, and I have no idea what it all means. But every once in a while, someone whips out a giant robot for an action sequence, so I guess that makes it all good. With all of the resurrected characters, and impenetrable and labyrinthine plot, Nobunaga the Fool feels much like a sedate, doped up Horizon on the Middle of Nowhere. You can guess where I’m leading with this. If you liked Horizon on the Middle of Nowhere, you’ll like Nobunaga the Fool. I hated Horizon on the Middle of Nowhere. What’s worse for me is that the check discs for Nobunaga the Fool Part 2 arrived alongside Part 1.