Article
The Gallows - in cinemas from July 17th 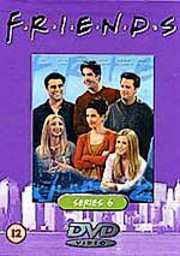 The One Where It Could Have Been Part 2
In the continuation of the alternate reality: Ross and Carol have a threesome with Susan, but Ross feels left out. Phoebe goes stir-crazy in the hospital, and sneaks back to work, only to find our she`s been fired, and promptly has another heart attack. Rachel spends the evening at Joey`s, but gets drunk and sick, and passes out. Monica decides it`s time to have sex with Dr. Roger, but he gets paged and leaves. Chandler and Monica decide to have a one-night stand, but afterwards Chandler convinces her to dump the doctor and be with him. Rachel, relieved that she didn`t cheat on Barry, returns home and find Barry in bed with another woman... their neighbor`s dog walker. She returns to the city to hook back up with Joey, but runs into Ross. They console each other on their bad marriages and Rachel helps Ross realize that Carol is a lesbian. Phoebe goes back to singing at the coffee house.
The One With Unagi
Joey`s financial needs aren`t being met by his job at the coffee house, so he looks into participating in another medical study. The only one available is for identical twins, but it pays so much that Joey can`t resist. He hires another actor to play his twin brother. Rachel and Phoebe are taking a self-defense class, but Ross feels they don`t have Unagi, a state of total awareness, in which you can be prepared for any danger. He startles them in the hallway to prove his point, which sets off an on-going competition of psuedo-attacks. Chandler and Monica plan to celebrate Valentines day (late) by making gifts for each other. Chandler can`t make anything and Monica forgets until the last minute, so each scrambles to come up with something.
The One Where Ross Dates A Student
Flattery in a teacher evaluation leads to Ross dating one of his students (Elizabeth). He finds out he could get fired, but the forbidden nature of the relationship makes Elizabeth want it even more. An old friend of Chandler`s (Dana) is Directing an Al Pacino movie, and Joey asks Chandler to get him an audition. Monica is jealous of the time Chandler spends with Dana. A fire in Phoebe and Rachel`s apartment means they`ll have to stay with their friends for a few weeks--one at Monica`s and one at Joey`s. At first Monica`s apartment seems to be the accomodation of choice, but it soon becomes clear that Joey`s is the place to be.
The One With Joey`s Fridge
Joey`s refrigerator breaks down, so he tries to manipulate his friends into paying for part of it. Plus he has to eat all those perishables by himself. Rachel is looking for a date to a charity ball; Phoebe finds a guy for her, but so do Monica and Chandler; things get competitive. Ross and Elizabeth continue their "secret" romance. When Elizabeth announces she`s going away for Spring Break, Ross misunderstands and thinks she`s asking him to go with her. When he finds out she`s going away without him, he starts to worry about how much "partying" she might be planning.
The One With MAC and C.H.E.E.S.E.
Joey auditions for a new TV show and makes the call-back list; but when the call-back time gets changed, Chandler neglects to give Joey the message. Chandler has a chance to redeem himself when he takes a message that the part is available again. Phoebe and Ross help Joey run his lines, and they become convinced that they`re great actors. Monica doesn`t like the chick and the duck. We see flashbacks to earlier episodes demonstrating: Joey`s acting; the pressure everyone feels at work; Chandler`s mistakes; Joey`s mistakes; friends fighting and making up; Chandler and Joey hugging.
The One Where Ross Meets Elizabeth`s Dad
The One Where Paul`s The Man
The One With The Ring
The One With The Proposal Part 1
The One With The Proposal Part 2

OK, so here we go again - same review as of the 5th season. What can I say? The seasons are so much alike.
What else can be written about this series that hadn`t been written before?
6 friends, one cafe, lots of laughs, a couple of tears, NYC - and there you go.
The video transfer is good. The TV-to-DVD transfer is clean of any defects and the colors look a bit more lively than they looked on TV.
The DD 2.0 soundtrack is ok. For this kind of sitcom, the lack of a DD 5.1 soundtrack is acceptable.
The menus are still with music.
There are no extras in this disc set, which is truly a crime.
Bottom line - one of the best sitcoms ever, with yet another funny season.
posted by Zvi Josef on 6/7/2007 02:47