DVD
Once Upon A Time In The West (US)

Blu-ray
Once Upon A Time In The West
Related Articles

Once Upon A Time In The West (Collector`s Edition) (UK) 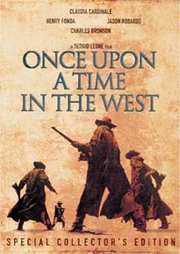 Synopsis:
Sergio Leone`s monumental epic Once Upon A Time In The West ranks among the five or six all-time Western masterpieces. The picture itself is as big as its Monument Valley locations, as grand as its fine, distinguished cast. Henry Fonda plays the blackest character of his long career and he`s utterly convincing. He`s Frank, the ruthless, murderous psychopath who suffers conscience pangs after annihilating an entire family. Jason Robards is the half-breed falsely accused of the terrible slaughter. Charles Bronson plays the harmonica playing man who remembers how his brother was savagely tortured. Brilliantly directed by Leone and accompanied by one of Ennio Morriconne`s greatest scores, this glorious picture helped re-establish the Western`s significance. Watch out for that lengthy opening titles sequence...

MOVIE
This is Sergio Leone`s last ever Western, and tells the story of several people in the Old West and they all revolve around the building of the Railway across America. The main characters are Frank(Henry Fonda), Cheyenne(Jason Robarrd), Mrs. McBride(Claudia Cardinale) and the mysterious Harmonica(Charles Bronson), and how they are all linked.
Although slated on release by critics and a flop at the box office, it did, like many other films find it`s market in Europe, and now is hailed as the greatest Western ever by many. I`m new to the genre, so I thought I`d start with this one. My first impression is that it is a very slow film. The opening is apparently the longest in film history, and I don`t debate that. This pace is kept up throughout the movie, and although it won`t suit everyone, and I found it a bit offputting, it suits the film, which is all about death, and the lead up to it. The advantage of this slow pace is that it makes it one of the most tense films I`ve ever seen. I`d compare it to John Carpenter`s The Thing in this respect. The acting is top notch (in particular Fonda`s against type villain), but it`s all about looks and stares. There is very sparse dialogue, but the dialogue there is is brimming with dry wit from all partys. It is the music and the direction that makes this film. The score by Enio Morriconne is stunning and really ups the tension, especially Harmonicas haunting well, Harmonica. The direction to us now is probably cliched, having been seen in countless spoofs, but it really was Leone at his peak here. all the close-ups, reveals, movement, they are all perfect.

VIDEO
One of the best restoration jobs I`ve ever seen. For a film from the late sixties, they have found a remarkably clean print, and Paramount have done a stunning job on this. In the correct ratio( a glorious 2.35.1) and hardly any grain or dirt on the print, the colours are gorgeous. This was vital on a film that moves from extreme close-ups to wide vistas, but the disc handles it admirably well. It leaves me with just one question. Why does this look so good yet The Godfather look very soft in comparison?

AUDIO
Remixed into DD 5.1, it`s a very subtle remix, and is excellent. The music is the most important factor in this film, and this is loud and clear. All dialogue is clear and crisp as are sound effects. It was never going to be a sonic experience, but this does the job.

EXTRAS
Before I mention the extras, I must make a particular note on the packaging. This packaging is the best I`ve ever seen. It perfectly suits the film, with a wonderful sand worn look to the digipack, and it covered with stylised version of all the scenes, it makes it look of extreme importance, and it really stands out. Now, the extras, they aren`t over the top, but they are concise and perfect. On disc one is a commentary (which is also subtitled) and it`s a good one. Full of information and featuring several different contributors, its excellent to find out more about the film, the subject matter and the director. One disc two are some shortish documentaries about the film, the director and the subject matter, along with a stills gallery and the usual trailer. A good compilation that doesn;t go over the top.

OVERALL
I recommend this to any Western fan, but you probably have it already. I also recommend it if you appreciate a film that is tense, or are a fan of good camera work. For the uninformed on Westerns, I`d rent it out first, but it`s worth a watch.
posted by cartoonjonah on 21/4/2004 21:42
9 / 10

Image quality: (7 / 10)
At first, the 16:9 enhanced 2.36:1 image looks sharp and detailed but digital artefacts such as edge enhancement make themselves noticeable, but the most noticeable problem is an interlacing artefact in the scene before the watering station that makes the character walking past blur and distort for several seconds on a 4:3 TV; a 16:9 monitors displays this problem mildly. The film element is pristine though it seems to have been taken from a lesser Eastmancolor element rather than original Technicolor element such as the trailer. The result is an image with poor skin tones and overtly reddish character.

Audio quality: (7 / 10)
The new 5.1 soundtrack is well remastered but it still has the inherent limitations of the original soundtrack. Also for purists like me it`s somewhat of a letdown not to include the original mono soundtrack as originally released.

Features quality: (10)
This is one of those discs you could buy for the extras alone, there are extensive documentaries and trailer, commentary, some photos and a very informative booklet (that by the way is not included in the R1 release). The packaging is also beautiful digipak and not the snap case that comes with the R1.

An Apsolute classic, mastered well ,the Audio is typical Italian Circa 60`s/70`s, The Mastering improves a little on it ;)