Blu-ray
Once Upon A Time In The West

Once Upon A Time In The West (US) 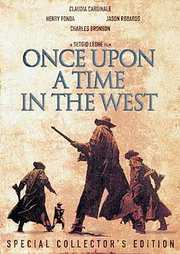 Synopsis:
Sergio Leone`s monumental epic Once Upon A Time In The West ranks among the five or six all-time Western masterpieces. The picture itself is as big as its Monument Valley locations, as grand as its fine, distinguished cast. Henry Fonda plays the blackest character of his long career and he`s utterly convincing. He`s Frank, the ruthless, murderous psychopath who suffers conscience pangs after annihilating an entire family. Jason Robards is the half-breed falsely accused of the terrible slaughter. Charles Bronson plays the harmonica playing man who remembers how his brother was savagely tortured. Brilliantly directed by Leone and accompanied by one of Ennio Morriconne`s greatest scores, this glorious picture helped re-establish the Western`s significance. Watch out for that lengthy opening titles sequence...