DVD
Blackadder: Back & Forth (UK)

Article
Alfresco on DVD this February 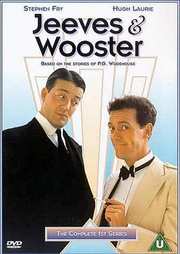 Synopsis:
What Ho!, you lovely young ladies and frolicsome chaps. We`ve put together a sizzling collection containing all the scrummy stories from our very first television series.

All the hoohaa began when I got myself a brand new valet, my good man `Jeeves`. Since then I`ve had a ballyho time of it with all kinds of close shaves. I`ve had to help old `Bingo` Little with a bit of a girl problem, and waste splendid summer days at the Drones Club Golf Tournament and Twing village fete.

On top of everything my dreaded Aunties, Agatha and Dahlia, have been matchmaking again and trying to entangle me with all kinds of frightful females. Oh well, never mind, Jeeves and I are in for a spiffing time at the shoot later today. Not even we can get into any more scrapes with just the boys, their dogs and their guns - can we?!

Introduction
What ho! Chin Chin, what sort of mess has Bertram got himself into this time.

I was once asked to describe the Jeeves and Wooster books, and came up rather stumped. What genre is it?
Its comedy, thats a given, not slapstick, but more amusing situational comedy in its truest sense. But what else?

Romantic comdey? well hardly. Some of it edges into the so called Rom-Com, but its not the boy meets girl type, more the girl gets the wrong end of the stick about boy and boy has to extricate himself from possible relationship whilst observing decorum and behaving like a gentleman.
Some of them edge into mystery, but ever so gently.

The Plot
Its an idyllic world, where nothing *really* bad happens. Presumably set sometime vaguely around the 1920-1940 era, when there were still landed gentry and one had a large estate in the country to retire to for the weekend.
Bertie might well be "up in front of the beak" for stealing a policemans helmet on boatrace night, but you know the reprisals will be mild.
He might well be accidently engaged to Stephanie "Stiffy" Bing, but its then how does he get out of it, or does he have to do the honourable thing?
Money is not a concern to Bertie, who is a man of substantial means (presumably inherited) - "Positively ill with the stuff".

Then there is Jeeves. A gentlemans gentleman. A brain the size of a planet, and all you could wish for as a valet. Where Bertie sees the obvious (and flawed) way out of a scrape, which usually ends in disaster, Jeeves can see through to the clear solution and picks up the pieces. Whether its getting Bertie in the clear, fending off the outrageous demands of the Aunts or getting the best for his Berties excentric collection of chums.

It is the gentlest of comedy, with nothing to offend anyone.

Fry and Laurie make an excellent pairing for the part. I read most of the books years ago, and had my own mental image of the pair, but now its completely supplanted by this pair. Hugh Laurie is a great Bertie. He`s impetuous, and plays the part to perfection.

Stephen Fry positively shines as the Valet. He IS Jeeves. His dry remarks delivered with just the right amount of disdain; the raised eyebrow; riding in the car with hat firmly held on. He just plays the part to perfection.

We start the series with Jeeves arrival. Bertie is up in front of the beak for the heinous crime of stealing a policemans helmet. He is considerably the worse for wear, unable to speak managing only a few croaks. £5 the worse he returns home to his flat, determined to sleep of the effects of the previous night. Enter Jeeves, and with Bertie in his current state, no intrusion is welcome! Jeeves mixes up an interesting cocktail of liquids, which revives Bertie so thoroughly, he engages him immediately. Next we find the ever present Aunts have it in for Bertram. We proceed through a series of family crises and disasters all of which Jeeves manages to straighten out, in spite of Berties help.

The Video/Audio
The video is nothing special, this was a 4:3 TV production. It looks a little washed out to me, maybe that helps a little with the vintage period. Likewise the sound is ok. The signature tune sets the mood perfectly.

The Extras
The extra on this disk is a 20 min voice only welcoming to the world of Jeeves and Wooster. Setting the context, with a selection of clips from the series. If you are new to Jeeves and Wooster it may help, but there it is nothing to rave about.
Would have been nice to have some commentary, I bet Hugh and Stephen could give some great insights.

Summary
A great realisation of the books, in nice digestable 1 hour chunks. Truly great.
posted by Julian Onions on 28/1/2004 10:40