DVD
Only Fools And Horses: The Frog`s Legacy (UK)

Article
It's Garry Shandling's Show out on DVD in March 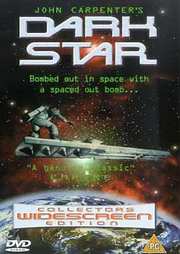 Synopsis:
John Carpenter`s pulp sci-fi classic. This brilliantly clever and funny parody of Stanley Kubrick`s 2001: A Space Odyssey follows a warped intergalactic mission to blow up unstable planets. Four bored astronauts fill in time between missions catching up on their tans with the help of a sun-lamp, playing with a suspiciously plastic-looking alien mascot they are taking back to Earth and conversing with their female version of HAL. Things start to go horribly wrong as the spaceship computer misfires. Ultimately, only one crew member - an ex-surfer - makes it back to Earth surfing on an improvised board...

This is one of John Carpenters earliest works in film. Before more popular films such as the varied Halloween`s, Escape from New York and others, he made this rather nice Sci-Fi film, on a complete shoestring of around $60,000.
He actually wrote, directed and edited the film himself, though he credits the parts to various pseudonyms.

Its got an interesting plot. Four (or more) men in a space ship light years from earth tasked with the mission of vapourising unstable planets. There is basically some brief periods of intense activity with mind numbing boredom for the rest of the time.
The "thermostellar" bombs they use to blow up the planets have their own personalities, and reminiscent of the lifts in hitch-hikers guide, are happy to blow themselves up in the knowledge of a job well done. And like the cirrius cibernetics corporations vertical people movers, they also eventually want to participate in the decision making process.
The crew are a rather mottley bunch, not improved by the fact one of them shouldn`t even be there, and they`ve been away from earth for a considerable time.

The ship is slowly decaying, through one suspects a certain amount of neglect, bad luck and bad decisions. The crew quarters and the toilet paper supply for instance have both been lost.

The comedy is from a certain amount of slapstick, like tracking down the alien, and the absolutely hilarious lift scene. Also situational comedy, just how do you convince a bomb its not time to go off?

So with some cheery bombs, a rather sexy computer that is for ever delivering bad news, a captain who is almost no longer with them, and a mission controller who really appreciates them, but can`t resupply them with toilet rolls the scene is set.

The video is very speckly, with lots of dust evident. It shows what an excellent job is done in some of the restoration efforts for other movies. I noticed there is a 30th anniversary version possibly coming out, so its probably worth waiting for that if you`re in the market to buy.
The audio likewise is fairly unimpressive, maybe the special edition will see to this too.

No special features - apart from a trailer.

In summary, the plot and action are enormously funny at times and it is a true cult movie. If you haven`t seen it, you need to, just so you can quote some of the lines. See it with some mates and a beer or two. However the DVD transfer is not impressive, and if this 30th anniversary edition is coming out, wait for that.
posted by Julian Onions on 5/2/2004 11:26