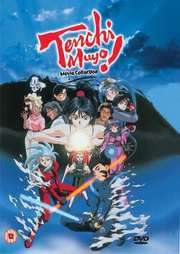 The merciless criminal Kain has escaped his sub-space prison and destroyed the Galaxy Police Headquarters! Deprived of his freedom by the Jurai royal family and the Galaxy Police, Kain`s first priority is to exact his vengeance on the Jurai family. Meanwhile, on Earth, Tenchi`s house has suddenly disappeared and Tenchi himself, begins to vanish! Washu determines that something has happened to Tenchi`s mother and everyone travels to 1970 to save the past.

On a hot summer day, a fetching young girl named Mayuka appears to Tenchi, calling him Daddy! Jealousy and envy follow as Ryoko and Ayeka battle for Tenchi`s attention with this new arrival. Who could the mother be?! Hiding in the background, Yuzuha, the Demoness of Darkness, is about to get her revenge against Tenchi`s grandfather, Yosho, for a grudge Yuzuha has held for over 700 years! She begins her plan by using Mayuka to steal Tenchi away to the Dimension of Darkness. So it begins again, Tenchi must fight to save his friends and Mayuka, daughter or not!

Tenchi storms off into the hills after a fight with Ayeka and Ryoko, but doesn`t return. After some time, Washu helps Ayeka and Ryoko locate Tenchi, but he has aged several years, and has been seduced by a mysterious woman. To make matters worse - he can`t even see or hear them! Will they be able to rescue Tenchi? Does he even want to be rescued?

Also contains a bonus fourth disc, with the Tenchi Encyclopaedia.