Review of Bowfinger
added by
Jitendar Canth
Places to Buy 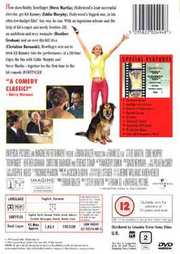 Back Cover of Bowfinger

Article
It's Complicated arrives on DVD and Blu-ray this April 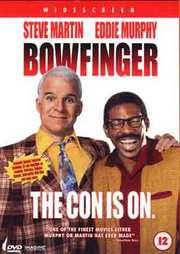 Synopsis:
How does Bowfinger (Steve Martin), Hollywood`s least successful director, get Kit Ramsey (Eddie Murphy), Hollywood`s biggest star, in his ultra low-budget film? Any way he can. With an ingenious scheme and the help of Kit`s eager nerdy brother Jiff, an ambitious and sexy wannabe (Heather Graham) and an over-the-hill diva (Christine Baranski), Bowfinger sets out to trick Kit Ramsey into the performance of a lifetime.

Enjoy the fun with Eddie Murphy and Steve Martin - together for the first time in the hit comedy BOWFINGER.

A witty comedy about the Hollywood movie industry. Hilarious at times and generally nice to watch.
The video transfer is not that great. On several occasions a lot of scratches are evident.
The DD 5.1 soundtrack is ok. There is a nice usage of the surrounds, which adds to the action scenes.
The menus are nicely done with good transitions from screen to screen.
The extras include a nice behind the scenes look, some (not that funny) outtakes and some deleted scenes. I did not listen to the director`s commentary.
Bottom line - nice movie, even funny at times.
posted by Zvi Josef on 20/10/2000 04:02
7 / 10

This DVD is good, the film is very entertaing with good performaces from steve martin and eddie murphy. The picture quality is dissapointing, there are the odd black marks appearing. I had not yet listened to the film in surround sound, but through what I have heard through my stero set up, it is good.
The extras are quite good, the `spotlight on location` is very interesting althogh eddie murphy seems uninterested during the interviews. There are five minutes of deleted scenes which add some more information for the characters. The outakes are nothing special, the MIB 2 and Star Wars ones are funnier. Frank Oz provieds an honest commentry which is very intersting.
Other extras are the usual trailers and production notes, a good disc let down by picture.
posted by Clive_Evil_C on 20/4/2003 00:24
8 / 10

Introduction
A film with Steve Martin and Eddie Murphy... now this could be great a great comedy, or it could be a disaster.

The Plot
Bobby Bowfinger (Steve Martin) is a Hollywood directory who wants to make a film. The only trouble is he has virtually no money, no stars and no equipment. Hmm - a bit of a problem you might think.
Well after one or two attempts to get the film going in the more conventional style, and failing to sign up one of Hollywoods top names Kit Ramsey (Eddie Murphy), he figures he can make the film with those he has, and secretly film the top name for star value.
So off they go, finding along the way Heather Graham who will do anything to get what she wants, Kit`s brother (also Eddie Murphy) and a bunch of illegal immigrants.

I found the start rather slow, but gradually warmed to the film, and there are some very funny and amusing moments. Its sort of like L.A. Story but done about the Hollywood circus. Poking fun at the whole movie business.

The Cast
Steve Martin - wrote the piece and plays the director well. He fits the part, but then I guess he would having written it!
Eddie Murphy - quite amazing as the two alter egos. He changes completely from the fast talking, high living star, to the more loveable slow talking brother. Hard to believe they are the same person sometimes.
The rest of the cast fill in nicely, but don`t really compare with the leads.

The Visuals/Audio
I didn`t notice anything special about the visuals or audio. A 5.1 track, but mostly dialogue, a few effects here and there.

The Extras
A number of extras
Spotlight on location - a behind the scenes short. Its a fair bit of the usual back patting, but a few interesting bits and pieces in there.
A directors commentary by Frank Oz, which I haven`t heard yet.
Deleted Scenes - some of them quite amusing giving a bit more background in some areas.
Outtakes - a few goofs, which are ok.
Trailer, production notes, cast and filmmakers notes - usual sort of stuff.
Not a bad lot of stuff for an average film, probably about what it should be. Certainly better than many. Realistically I`m not sure what else you could include.

A nice set of menus too - with the amazing freeway dash as background.

Summary
Its not the funniest film I`ve ever seen, and I wouldn`t say its Steve Martins best ever work - I`d go with L.A.Story or parenthood for that I think. It is quite amusing as a plot, and it gets better as the film develops.
posted by Julian Onions on 21/6/2004 13:15