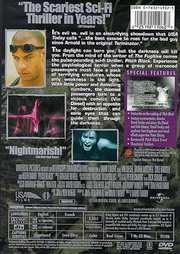 Back Cover of Pitch Black (Unrated)

DVD
Last Samurai, The (Widescreen) (US)

DVD
Touch Of Evil (US)

DVD
Skulls, The (US)

DVD
Chronicles of Riddick, The (UK) 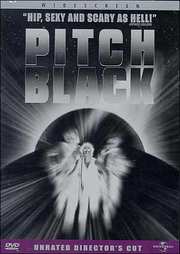 Synopsis:
It`s evil vs. evil in an electrifying showdown that USA Today calls "...the best excuse to root for the bad guy since Arnold in the original Terminator."

The daylight can burn you, but the darkness will kill you. From the mind of the writer of The Fugitive comes the pulse-pounding sci-fi thriller, Pitch Black.

Experience the psychological terror when a group of marooned passengers must face a pack of terrifying creatures whose only weakness is the light. With little power and dwindling numbers, the doomed passengers turn to a vicious convict (Vin Diesel) with an appetite for destruction and eerie eyes that can guide them through the darkness.

I think everyone should watch this, this is one of the best horror/action films of the year 2000

The media called this movie "Hip, sexy and scary as hell!".
Well, I guess this is a very good example of how wrong the media can be. It is neither hip, nor sexy. But most importantly, it is not at all scary. Not even a bit.
The video transfer is very good. The dark scenes (pretty much the second half of the movie) are rendered beautifully. The visual effects are outstanding during the first part of the movie, but become hilarious when the creatures are exposed. The CG of the creatures is probably one of the worst I`ve seen.
The DTS and DD 5.1 soundtrack are both explosively effective. While the DTS sounds a bit better, it takes a really good will (and ear) to notice the differences.
The menus are surprisingly static but are accompanied by some music.
The extras include 2 good commentaries, a short behind the scenes look and a totally worthless 20 minutes look at rave parties. Huh???
Bottom line - a good special effects movie, a decent plot and great sound.

At least we have a sci-fi thriller with no big stars, well apart from Vin Disel. This film is brilliant and one of the most original alien horror films I seen.

But the DVD however is great. Unrated mean more blood! Yeh...the features prove to be good with a very insighful commenteray.

PLease all sci-fi horror fans (well except from Mission To Mars) please board this fright fest and enjoy.

Sorry to have to do this but I must debunk the Unrated = extra gore myth.

The parts added are character development and detail in the Daylight portion of the film and there`s no extra gore at all.

This does add to the film - slows the pace of the first segment some but goes a lot further into explaining the motives and behaviour of the few survivors.

This is a great movie which breaks a pleasant number of the hollywood cliches - it`s a fair bet you`ll guess wrong if you try and figure out who the survivors will be from the start of the film.

The monsters, kept mostly in the dark, are suitably freaky - in fact just how clearly they come out despite the dark colours is a testament to the effort put into the compression on this disc. The crash scene is simply stunning and image quality is superb overall. Not tested on anamorphic though.

It frightened the crap out of my sister, who doesn`t react to movies - and I reckon thats a good test :)

Layer Change is beautifully timed at the eclipse, couldn`t be better. The DTS track is an oddly different mix, but does work better IMHO. The commentarys are somewhat light and I must confess to drifting off once or twice....

All in all a cool and scary film with one of the most memorable takedown lines this year and a great disc. Shame about the extras!
posted by Iain M on 8/12/2000 12:45
Worst film ever, so bad my world went PITCH BLACK....

I had been looking forward to this film being released for some time, when I finaly recieved it, I can honestly say I wasnt dissapointed.
The clever twists in plot keep you guessing the entire length of the film who will survive. One of the better parts to this film is the character development, while on the one hand you have the pilots loyalties changing slowly through out the film, the main bad guy (van disel) was true to his character all the way to the end, never turning into the reformed bad guy so many films tend to do.
The picture quality was brilliant, considering its format and bleeched out start and very gloomy and dark second half the DVD coped very well with rarely any noticable artifact (digital noise), the sound i was a little dissapointed with however, the intro which could have been fantastic was mearly ok, which was a wasted chance to utilize the DVDs potential, although this did get better as the film progressed.
If your looking for a quality space/horror flick with some brilliant sfx, The Animation of the Creatures was very good (which if your into Animation, or maybe doing a degree in it like me, will apreciate).
Get this FILM - ROfu
posted by ROfu on 8/6/2001 12:42
8 / 10

A must-have DVD for your collection - a good film in its own right is a real bruiser on DVD. Excellent sound and visuals with a few good extras - the crash scene at the start is simply amazing!
posted by mclh on 26/8/2001 17:25